Crean and Co. Send Message to Panthers: You are Nowhere Near Our Level

This was clearly evident (at least) on that long, long Friday evening as they attempted to resemble something of a competitive D-1 basketball team running up and down Al McGuire Court whilst Marquette rebounded, passed (MU tallied an incredible 26 assists!), and shot the lights out both from the perimeter (9 for 26) and in the post on their way to an easy-peasy victory.

What was most disheartening was the fact that, until about the 4 minute mark in the first half (with 4:18 left before the break, Marquette's lead was only 5!), the Panthers really looked like they were feeling comfortable out there, and that they were going to keep this crosstown rivalry kickoff interesting.

Enter a barrage of threes from MU in the final 4 minutes of the first half to put Marquette up 50-33, add to that MU's 10-2 run after the break, and the MU defense slowly but surely turning Milwaukee's X-Factors (Torre Johnson and Paige Paulsen) into non-factors, and this game was well in hand for the Eagles, early in the second half. Marquette's lead steadily climbed from 20, 30, 35, all the way up to 39 with a little over a minute left as Marquette scored it's 100th point of the contest.

Yes, Tom Crean showed why he's the classiest coach in college basketball by leaving all 5 starters in the game until the bitter end. Yes, Marquette is ranked #12 in the nation and UWM (never ranked in the top 25 in D-1 during the regular season), was beaten soundly by a Drake team that many of us, just before this season thought would be a guaranteed win.

Yes, our chances suffered from Jump Street when Torre Johnson and Tim Flowers (our two biggest post weapons against an MU team who's strengths are limited only by their lack of depth at that position) were sitting next to the coaches nearly all night due to early foul trouble. And yes, Paige Paulsen took only 7 shots all night and was not the calming three-point shooting equalizer he had been all season up to this point. But all that is beside this huge, huge point- we got our behinds handed to us on a golden platter, fair and square. 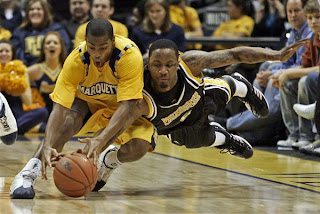 Listening to Jeter's postgame interview, one might walk away thinking Rob didn't even want to try to win this game (excerpt- "my guys, they had a lot of friends and family here to see our players play, so I decided to have all our players play."). What? Really? If I would have known that we were playing the season to make all those moms and dads proud that their kid is seeing a lot of floor time despite his inability (when playing minutes beyond what they have "earned" based on previous play) to make the contributions needed to win games, I may have thrown out my season tickets and prayed and hoped that UWM will have a coach who cares about winning games and building the confidence of players who can make these kind of contributions.

That being said (with one glaring exception) I believe Rob was referring to the end of the game, when UWM had the end of it's bench on the floor up against Marquette's starters and 6th and 7th men. Torre Johnson, Paige Paulsen, Deonte Roberts, Ricky Franklin, Tim Flowers, even Deion James and Marcus Skinner all have proved that they are deserving of significant playing time- and some of them actually are seeing it.

Some players on the team however, for reasons beyond the grasp of my feeble basketball mind, have so far proven themselves very undeserving of the floor time they are being afforded (I really, really hope that changes soon); but nothing, not even being outplayed by players coming off the bench in brief spurts here and there in their stead, seems to change this.

While I promised myself that I would never criticize or single out a UWM player in this blog, I don't know what else to do but make mention of the fact that someone, some guard who has started every single game, while a very quality bench player in his own right, is not the kind of "floor general" who is so essential to managing the offense and guiding the team, on offense and defense, to victory.
The bevy of problems this team has is hardly isolated to a few players or a few mind-boggling coaching decisions however. Many of the players all season (even in the wins!) have looked confused, not knowing where to pass or where in the world the Swing is going (or even what the Swing Offense "is"!).

If I see one more player drive to the basket, only to pick up his dribble and look around like a man trying to throw a freshly detonated grenade anywhere (never to an open man it seems!) before it explodes, I may regurgitate what is left of the hopes and dreams I had for the Panthers coming into this season. Shoot the ball when you are that close to the basket! You are almost guaranteed a trip to the line! 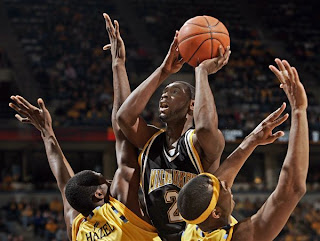 Teams very rarely reach the century mark in college basketball games, but Marquette, in no part aided by TC's starters matching up against whatever players we had left on the bench whose parents hadn't yet been able snap photos of- (and no, that is in no way a criticism of Jeter or these players, but rather of Tommy "run-up-the-score-and-send-'em-home" Crean- the game was long over and statistically impossible to save at that point) did just that, as the score read 100-65 on the jumbotron as the final seconds ticked away.

I, like most Panther fans with some semblance of reality, had no illusions about the long odds of winning this game. As the season has unfolded those odds started looking slimmer and slimmer, and by the time the game tipped off, I was hoping we could merely keep it close and lose by less than 15 points. Apparently that was far too tall an order for a Milwaukee Panther basketball team still in the midst of trying to find it's identity.

As is usually the case, this game did have a few encouraging things to take away. Deion James had a coming-out night, scoring 10 points and drilling an impressive two of three from beyond the arc (side note: we need all of our guards to pose a real three point threat against teams- Paige doing all the work takes away from his rebounding abilities and, if he has a off night (as was the case vs. MU), well, you can see what happens..

The 3 point shot has been the bread and butter of UWM's success for the past 7 years; why lose this all-too-important mid-major "equalizer" that has worked so well in the past?). Ricky Franklin had 14 points and 4 assists, Tim Flowers was a pesky big problem for Marquette when he was not on the bench with foul trouble, and Deonte Roberts (despite some costly turnovers) continued his steady improvement.

As said at the beginning of this post, UWM actually was in the game until MU unleashed it's vast superiority in the form of nearly error-free basketball (or until UWM began to play like well, the UWM team we have seen all year). I hope that is the last time I ever see our beloved team embarrassed so badly. Also, Marquette fans were, up until the day before the game, having a ball taking pot shots about the fact that the game was not going to be anywhere near the sellout that Bud Haidet has guaranteed for years during contract discussions and negotiations.

I was at the Bradley Center (and I've been to several Bucks and a few of MU's Big East games) and unlike many of those games (and nearly all of the Bucks games) the environment before the game and up until the game was out of hand was nothing short of electric.

It sure was a fun game to watch for Marquette fans. They let us hear it in the closing minutes, chanting "This-is-OUR-town, This-is-OUR-town" which I can only hope has ruffled a few feathers in the Panther Basketball program to ensure this kind of game between these two schools NEVER, EVER, happens again.

As discouraged as I was seeing the Panthers get so completely outplayed, I am very glad the series was renewed and I am still very excited about the future match-ups between these two teams. It will be a whole lot of fun once the Panthers can make it competitive. 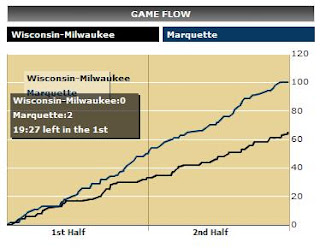 Who knows, maybe if something finally clicks with these guys in black and gold in this upcoming road series in Chicago (at UIC on Thursday and Loyola on Saturday, both with tip times of 7:00 pm and televised on Time Warner Sports), or when Wisconsin comes to town (that could be as bad or worse than the Marquette drubbing unless these kids shape up- just a warning which may soften the blow a little...) this team will make us fans proud again.

I'll always love the Milwaukee Panthers, but right now it's been harder and harder to keep faith in this season being anything more than another "rebuilding year". I guess it took the Pack two forgettable seasons to get back on track, and maybe things are headed in the right direction for the long term. But it's hard to think long term when we have been waiting so patiently to be excited about the talent that has come into the program, and a potential return to the kind of successful program year in and year out which Bruce Pearl made seem so easy.

Unless you are referring to last year's campaign, this season has been anything but: "business as usual". We need a long winning streak. We need it now, and really, really bad. That might win back many Panther fans who have probably given up on this team after this horrible, terrible loss. I can't wait for the day when the US Cellular Arena is once again packed with 5,500+ Panther fans on a regular basis, and home to the best college basketball team in Milwaukee.

Let's hope in future "The Battle for Milwaukee" showdowns, the chant about "this-is-OUR-town" is chanted by us, and replaced by something like "We-Are-MIL-WAU-KEE". But I get ahead of myself. This year is not yet lost- we have been beaten by solid foes. Let's just hope this team can find out how to win games in bunches, starting this Thursday night at 7:00 pm in Chicago, Illinois.
Bradley Center College Hoops Deion James Dominic James Marquette Milwaukee Basketball MU Panther Basketball Rob Jeter Tom Crean UWM Basketball UWM BasketBlog