January 05, 2008
Not much time to post here.. (there's another game in just a few hours!), but I will mention that UWM is now in the midst of a 4 game winning streak after downing Detroit this past Saturday night at the US Cellular Arena. Down 53-52 with the clock nearing the final buzzer, Paige Paulsen, apparently with ice water in his veins, nailed a 27 footer to give Milwaukee its first lead (55-53) of the game with only 2 seconds left in the second half. Detroit was out of timeouts and could not manage a decent shot to tie the game.

Pandemonium ensued, and once again we saw a team that is finding ways to win- game in and game out. The fans in attendance were certainly treated to a show. Milwaukee's intensity at both ends of the floor could not be ignored. This kind of play has kept up since the Central Michigan game and shows no sign of slowing down. 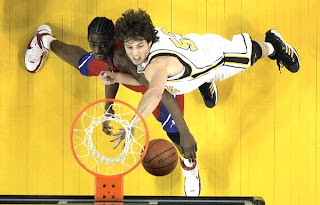 While winning this game in a more convincing fashion might have been possible (Detroit has lost its last 8 contests), picking up the win and continuing the winning streak is good enough. Major Goolsby's seemed like a much-revived UWM Panther fan hangout after the game (Goolsby's hosts the 1130 post game show with Rob and the team).

If this keeps up, there may be more than just "playing for pride" on the line this season when the team gets back to the Arena in a few weeks. It defies all logic, but I'm happy with what I see.

The Panthers face off against Youngstown State tonight at 6:00pm Central Time. The game will be televised on Time Warner Sports (Channel 32) and the Horizon League Network (http://www.horizonleaguenetwork.tv/). Cheer your Milwaukee Panthers on to another win!! With all they have been through and the determination they have shown, how can you not?
1130 Deion James Deonte Roberts Major Goolsby's Marcus Skinner Paige Paulsen Panther Basketball Ricky Franklin Rob Jeter UWM UWM Basketball UWM Blog