UWM Takes Care of Business on the Road, Drops Phoenix 65-61

January 21, 2008
I apologize in advance for having nothing really meaningful to say about this game. I have not missed a game, either in person (every home game), on TWS, or on the radio when TV isn't available, but sadly, due to the limited bandwidth of the Horizon League Network Game Feeds, or my own internet connection, I was not able to follow the UWGB game much at all. I stopped trying to watch my herky-jerky HLN broadcast after the first few minutes- it was impossible to see/hear what was going on.

One thing that confused me though is- wasn't this (and all UWM games) supposed to air on 1130 AM with Bill Johnson? I was sad to find that when I tuned in, there was some boring sports radio program on talking about how the Packers were going to best demolish New York on Sunday ("should we smash them and make some roast mutton? or mince them into a fine stew?").

Funny how overconfidence can really take the momentum and drive away from a damn good team. Enough about the Packers though- I will only say that overconfidence really troubles me. I love underdogs and that sense of having a chip on your shoulder which only serves as the perfect motivation to prove the naysayers wrong (it must be ingrained in me since I went to college at UWM when they emerged as a bona fide NCCA D-1 mid-major program in the early 21st century).

Anyways, yes we won the game! And I'm sure you already knew that much... What I am most surprised by (viewing the box score is my only reference) is that we managed to pull out this victory with Deonte Roberts and Deion James suffering from foul trouble all game (both had off-nights in terms of their performance as well... as good as they have been during the recent turnaround, they were almost due for a lackluster outing).

Fast forward to the current. Monday the 21st of January, and the Milwaukee Panthers are a more-than-respectable 10-8 overall, and sitting 3rd place in the Horizon boasting a 5-3 conference record behind Butler (6-2) and Cleveland State (7-0). In mid-December, after the Wisconsin beat-down, who would have thought this would be remotely possible? 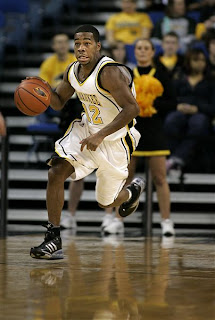 
After a long and highly successful 4 game road trip, the Panthers come back relatively unscathed as they won 3 of the 4 contests, only losing to #12 Butler. Next up is Youngstown State whom UWM crushed in Youngstown earlier this season 61-39 behind the hot 3pt shooting of the man who cannot be shut down, no matter his distance from the hoop before a big jump shot- Paige Paulsen.

The Panthers cannot look past the YSU match-up on Saturday (they face off against the best team in the Horizon (record-wise), Cleveland State, Saturday night at the Cell) as this game will be a far different match-up than the two teams' earlier meeting in Youngstown, OH (there has been quite the reversal of fortunes between the two clubs).

Win this game Panthers. Let's continue to build on the mountain of confidence already amassed since the "fortunate" removal of certain rogue elements from the team's chemistry* and go into this grand showdown on Saturday in perfect form, with those shots ready to fall, and that stalwart defense poised to thwart any effort of the Vikings to continue their Horizon league dominance. And look, it seems I am the only one looking ahead! Well I am hungry; it's lunch time in Wisconsin. Roast Penguin anyone? Only kidding- the team needs to be 100% on point to ensure these Penguins march right out of Brew City with no victory in hand.

*Kevin Johnson is officially no longer a Milwaukee Panther. He figured he knew what was best for his future, and (as was ominously hinted at in pre-season) decided to transfer to JUCO school, "Mineral Area College" in Missouri. That's too bad for Kevin. He squandered a real shot at greatness here at UWM. While I think this decision of his to waver and then opt out of a huge 4-year commitment to a D-1 basketball program and excellent University is not in his best interest and a tad disrespectful to the people (players, coaches, trainers, administrators, teachers, relatives, etc.) who invested so much time, and energy into bringing him on board, Mr. Johnson can make his own evaluations at a later time. I do wish him the best.... but he'll never know what could have been.

On a related note, according to people close to the university, Tim Flowers has enrolled for Spring semester and there does seem to be a slight possibility he will rejoin the team in some capacity for the remainder of the season. Earning substantial playing time after missing over a month will be.... a challenge. That being said, Tim is a great player and I'd hate to see him take the same (read- "easy") route as Kevin and leave behind a D1 college scholarship in favor of playing sub-par competition with his Illinois HS Hoops friends at MAC.

I hope he comes back on board, because sans his perceived "attitude", "adjustment to Milwaukee", "family" issues, whatever- he could be one dominating force in the Horizon League for years to come.

Either way, I hope life works out for both of these individuals; you live and you learn. I do know that Jeter and staff will pay a lot more attention to dedication and character as they move along with subsequent recruiting efforts. It will be a giant relief when this overly drawn-out debacle comes to it's inevitable conclusion. Whether that be Flowers staying or Flowers going, the Milwaukee Panthers Basketball team will press on.

EDIT: Flowers is gone; apparently he thought that the list of requirements Jeter laid down to him in order to stay on the team were "too difficult". Kind of like everything in life after the age of 18. Good luck with that kind of attitude. But frankly, we'll do this on our own.