January 04, 2008
Wow. I left the Arena feeling pretty speechless last night. Your Milwaukee Panthers posted their third consecutive victory 75-64 over Wright State, improving the season record to 6-7 (1-2). More importantly (in my mind), this win validates the sneaking suspicion many of us have had since this all started vs. Central Michigan- this team has finally found its chemistry. All players deserve props for making this happen, but most credit should be given to Jeter (as most of the criticism lies with him when things aren't going so well).

Under similar circumstances I guarantee you any other NCAA D-1 team would implode. Imagine losing your returning scorer (Avo) before the first exhibition game, losing your best all-around player (Torre) to an off-court arrest for battery, losing one of your best recruits of the past two years due to homesickness (Gentry) in the middle of the season. All of that manure, not to mention, staring at the prospect that the two most heralded recruits in program history (KJ and Flowers) may never don a Panther Black and Gold uni again.

So with UWM down to 10 active players on the bench, a fan base in disarray, and the season considered dead in the water by many, our boys have done exactly the opposite of what one would expect- they are playing the best basketball of their lives; and that, may be good enough for more than just a "few" more victories. I'll be careful not to get ahead of myself (read some of the posts around the beginning of the season!) as this is only a string of 3 wins. However, if the Panthers play like they have these last three games, there is no reason not to believe this thing can get turned around. 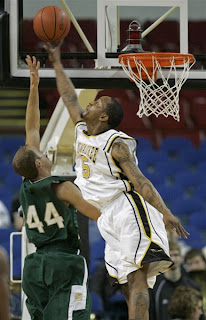 Oh, and about the game of course! UWM once again got off on the fast track with a barrage of three's (12-22 on the game) and Wright State never could manage to catch up. Ricky Franklin played head and shoulders above all of his other games this season (and that's saying a lot- he's had some good games). Ricky's line? 37 minutes 8-11(FG) 3-3(FT) 5-7(3pt) 2(Blks) and 24 points altogether.

And remember this- as a sophomore (eligibility-wise), Rick is just getting started. Paige Paulsen (15pts, 2-6 from 3pt land) had a solid game, as did Deion James (12pts). But as has been the case recently, the Panthers played a beautiful game of team basketball- getting everyone on the same page and involved to score, create, and make the offense work.

And how!!! The offensive sets have looked completely new (or maybe the team is just finally getting it right!), and that has wreaked havoc on opposing defenses. Most importantly though, is the fact that our shots (inside and outside) are finally falling.

Granted, the team has yet to prove itself against a much larger opponent (rebounds will be key in these matchups- oh how I wish Joe Allen was playing this year), but the way things are going, it is once again very enjoyable to watch this team.

Speaking of that, if you reside in the Milwaukee area, you can see for yourself as the team meets Detroit this Saturday, 7:00pm at the U.S. Cellular Arena.

Last night, all of about 2,200 fans were so loud and enthused that a blind man would swear there was 5,000 in the house. I couldn't make this stuff up. This team is finally playing team basketball, and having a lot of fun doing so. They play with heart. They play with a new found UWM pride. And most of all they play with a organized chaotic passion. Will that will be enough to keep this thing going? I'm betting on it.
Deion James Milwaukee Paige Paulsen Panthers Ricky Franklin Rob Jeter US Cellular Arena UWM Hoops Winning Streak Wright State Basketball