February 13, 2008
In what easily would (read- should) have been one of the biggest college basketball upsets in recent state history, your Milwaukee Panthers (12-11, 7-6) were edged in overtime by Mike Green and #9 Butler (22-2, 7-2) in front of 4,000+ at the Arena. The loss marked the Panthers third straight and put UWM 4 games in back of the league-leading Bulldogs.

Yes, it took “tha Dawgs” an extra period to knock off the Panthers, which is impressive in itself, but, considering the fact that Milwaukee was in charge nearly the entire game.... this loss stung particularly hard. UWM benefited from a poor shooting night from both A.J. Graves and Pete Campbell- two of BU's ultimate warriors.

Unfortunately, where they fell short, Mike Green excelled. Green had only 2 points in the first half, but exploded down the stretch, scoring 12 in the 2nd half and shooting a perfect 2-2 from the field, and 4-4 from the line in OT to seal the deal.

Even after spraining his ankle late in the game and leaving the bench briefly, Green came back and knocked the Panthers off their block. He seemed to have the game winning touch as he netted two free throws ( he was 10-10 on the night to compliment Butler's 25-33 showing from the charity stripe) as the game was coming to a close (almost) to give BU their final lead of regulation. This was disappointment at it's worst.

But... with 5.6 seconds on the clock, Ricky Franklin (a la the Ball St. game) cruised from inbound to the opposite arc and buried the most exciting shot since Paige Paulsen's game winning three to beat Detroit when things were going a little better for this team. 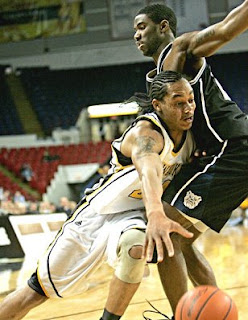 The crowd went wild, and UWM really was still in this thing. But a lackluster OT performance in which Butler scored the first 7 points drove the nail into the coffin and reminded UWM why Butler University is ranked #9 in the nation and the Panthers are ranked #5 in the Horizon League.

The team continued it's trend of horrible shooting from the field (25-63, .397), and failed to sink some crucial free throws (17-28, .607) that may have pushed us over that mountain of a challenge- we certainly reached the peak last night.

UWM's upset bid was primarily buoyed by the career-best 24pt, 10rbs effort by Marcus “double, double your refreshment” Skinner, and an Alan Hanson (18pts, 5-7 from 3pt) who appeared to be possessed by a spirit who can snipe out 3's like target practice. This is the new Al! We collectively hope so...

Butler did serious work in defending Paige Paulsen (11pts, 5rbs, 1-3 from 3pt) , who couldn't buy an open look, and Ricky (5pts, 6rbs, 5ast, 1-7 from 3pt, 2-10 from the field) was frankly having a rotten shooting night. Deonte Roberts (6pts, 6rbs, 4ast) continues to play his unique brand of “controlled chaos” at point (he did only have 1 turnover), but he could not manage to penetrate the immovable wall of Streicher, Jukes, Howard and co. On an unrelated note, Deonte is a gamer; he is excellent at attacking the hoop, and he will only get better, but man it is scary to watch him run the offense at times!

I agree with the notion that UWM has fared pretty well running 4 guard sets at times, but last night (and largely all season) our lack of height concerns me when the post is so wide open, Mike Green can drive Butler's bus through the lane and consistently convert lay-ups uncontested. I guess we will have to make do with what we've got!

This is certainly the least optimistic post on this web log I have ever made- call it a reflection of my dejection. But alas, the Mil-town Panthers must regroup, redouble their efforts for a UWGB team that matches up very well, and ultimately: Re-Up. Ripe time for another winning streak, no?