September 15, 2008
Next year will now feature two of Indiana and Missouri's Best. they are both guards, and both have shown tremendous ability and even more potential at their guard positions. Lonnie Boga of McCluer H.S. in Florissant, Mo and Ja'rob McCallum of Marion H.S. in Marion, IN gave commitments to play for the Panthers starting next fall. McCallum is 6'1" and (among many other accolades) is known to many as one of the high school players who went 3-on-3 with presidential candidate Barack Obama before the Indiana Democratic Presidential Primary. 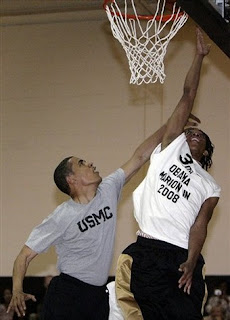 McCalum is quoted in the Journal-Sentinel as saying, "I just felt the program is real family-oriented,” McCallum said in a phone interview on Thursday. “Coach (Rob) Jeter came to our school on the first day he could recruit, and that meant a lot. He’s somebody I’d love to play for".

Boga has made a name for himself as a strong and fast guard for McCluer. His athleticism is not surprising- Boga also plays football (wide receiver, linebacker, punter) and track.

Jeter and Co. have been doing a bang-up job of recruiting as of late; these players are evidence that talent from even further away than Iowa and Minnesota is paying attention to UWM and the kind of winning basketball future that's brewing here. Welcome to Milwaukee Ja'Rob and Lonnie.

We're all looking forward to seeing them don the Black and Gold and represent this fine university on the basketball court and on campus. We're aiming to put this program back in the spotlight this season- and these two will only build on that next year.
'09-'10 UWM Basketball Indiana Hoops Ja'Rob McCallum Lonnie Boga Missouri Hoops Rob Jeter US Cellular Arena UWM Recruiting