September 10, 2008
First off, it is not without some sadness that I must report the bad news- Joe Allen is academically ineligible to participate this season and so will not be a member of the Panthers. Joe has been recovering from a devastating injury sustained last season at Panther Madness and was hoping to begin his UWM career this season.

He still has eligibility to play ball, but first he must get his academic house in order (which can't be easy when you are going to school and rehabbing at the same time- Joe is no slacker and has a bright head on his shoulders). One must always remember in college sports- these are student-athletes we are talking about here. First thing's first.

But despite losing a much-needed big man, Panther fans will have a lot to be excited about this year (yes, I know we've heard this line before... just read on though!).

Coach Jeter and staff have added 3 established JuCo players, and return a more familiar name to the roster- Mr. Avery "Avo" Smith. That's right (see two posts below), Avo himself probably would have told you that he could not envision this happening after the negative tension between himself and the team ultimately led to his formal dismissal before the season opener last year. (although I did see him behind me in the stands cheering on his teammates at more than one game last year) 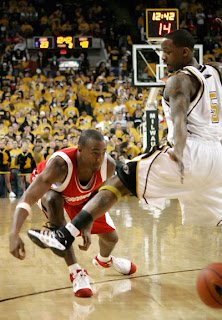 A kick save and a beauty... Ricky Franklin and his aggressive style of play are among the many positives that (made it out alive- better, faster, stronger and) return from last year's turbulent ride.

Smith brings a veteran scoring presence and genuine name-recognition in the Horizon League (people in the HL haven't easily forgotten Avo's 15.5 ppg Sophomore season in '07-'08). With a guard-heavy lineup and plenty of viable scoring options, the Panthers of this season figure to be a quick, aggressive, and higher scoring bunch than they were last year (avg. 66.9 ppg). Guards such as Ricky Franklin, Deonte Roberts, Charlie Swigget, Avo, and Deion James have already gained the experience needed to be a deep backcourt force against some very unforgiving D-I competition (more on that in a moment..).

Of those who do not redshirt this season, Division I newcomers Tone Boyle, Riley Walker, Patrick Souter, and James Dean can provide even more depth at the guard position. With Jason Averkamp, Anthony Hill, and Kaylan Anderson (Kaylan is really SF/SG) being the only returning big men, the additions of JuCo shot-blocking extraordinaire Burleigh Porte, Ryan Haggerty, Tony Meier, and James Eayres are a huge shot in the arm for the front court.

The Panthers felt the pain in the paint these past two seasons all too often when mismatched against what seemed like gigantic opponents (remember the utter futility of Tim Flowers trying to guard the 7’0” tree from Northern Iowa or Scott VanderMeer of UIC last season?).

It may take a bit of time for these new Panthers to overcome the D-I learning curve; but once the season gets going- look for any one of these players to start turning heads, and garner significant floor time.

While Avo will not be as heavily relied upon to score points (the '06-'07 club was by far the most inexperienced roster in recent memory), he will definitely figure huge into the success or failure of this year's campaign. Reportedly, Smith must sit out the Panthers first three games of the season at the World Vision Classic in Ames Iowa due to his participation in the IUPIU scrimmage last year, but is fully cleared to participate immediately afterward.

While certainly exciting to have aboard, the Junior College alumni and incoming freshman joining UWM's ranks are largely an unknown quantity. They certainly have solid credentials at their respective former schools, but whether that is any reliable indicator for how they will adapt to the much higher level of competition in NCAA D-I won't be determined until the games start. 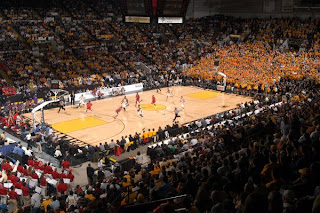 Think you've seen the last of this kind of sight (at least until MU comes to our house)? Think again- the Cell court floor isn't the only thing that's changed from last season to this year's campaign.

On to the season! The 2008-2009 Milwaukee Men's Panther Basketball schedule has officially been released, and now we can begin to assess the kind of odds this team is up against. In short, the schedule is no cake-walk for any Mid-Major. UWM plays contests against 10 teams who reached the postseason last year and the list includes games vs. Bradley, and on the road against Iowa State, Miami (OH), Marquette, and Wisconsin. And that’s not to mention a pair of games against each of the following Horizon League teams who are looking to improve on strong showings last year- Cleveland State (Pre-season HL Champ Favorite), Butler, Valparaiso, and Wright State.

Unfortunately, notable drawbacks to this schedule include the fact that there are a great many home games scheduled in January (when most students are home for the Holidays), and far too few home games in November, December, and February (there is currently only 1 home game (versus Butler) scheduled in February).

Overall though, Jeter was able to put together a challenging slate of games for these young Panthers. With many of the heaviest hitters (Iowa State, Marquette, Wisconsin, Bradley, and Miami (OH)) scheduled before the New Year, this team will be put to the test immediately. Let’s hope that serves to motivate this bunch. The ingredients are there.... but will the formula work?

After the exhibition games which will hopefully instill a strong sense of confidence in this squad, it’s on to the aforementioned “World Vision Classic”, which takes place Nov.14 – Nov. 16 in Ames, Iowa. UWM will face off first against Loyola Marymount on Friday, then Cal-Davis on Saturday, and Iowa State to finish out the Tourney on Sunday.

Those three days will tell us a lot about what to expect and how much of a shot UWM realistically has at being the toast of the East Side once again (much like the season-opening '06-'07 John Thompson Classic we hosted at the Cell when we made Radford look pretty decent in our only win, and were subsequently given back-to-back demoralizing "Smackdowns" by UAB and Washington State.... the season didn't go so well after that). Heck, I've got some vacation time saved up, I’ll see some of you in Iowa to find out first hand! 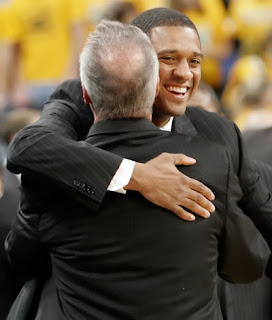 Thanks for everything you taught me Bo, but I might have to beat you this year...

PS: The iGoogle Schedule Gadget (which can be added to your personalized iGoogle homepage by clicking the link at the bottom of the page) has been updated with the new schedule- go see it for yourself!
'08-'09 UWM Basketball Bradley Center ESPN Bracketbuster Iowa State Marquette MSOE Rob Jeter US Cellular Arena UWM '08-'09 Schedule Wisconsin Badgers World Vision Classic