EDIT 10/4/08: According to The Wisconsin State Journal, earlier Milwaukee Journal-Sentinel reports of Marquis Mason giving verbal commitment to UWM were "premature". The article states that Mason is interested in and pursuing D-1 football offers, however UWM and its basketball scholarship offer to Marquis is still tops on his list of college choices. So, while we hope that Mason decides to become a Milwaukee Panther when he does make a solid decision, he is by no means a guaranteed commit for 2010. We hope that these reports are inaccurate or exaggerating the truth, but they must be taken into consideration. 6'7" Milwaukee Custer PF Calvin Godfrey, on the other hand is in the 2010 picture and excited about coming to UWM for college and playing with the Panthers.


Although on a previous post, I pledged I would not comment on potential recruiting hype, I think a couple of very exciting announcements deserve the attention of this Blog.

It is well known that the Milwaukee Panthers have bolstered their recruiting efforts (esp. High School recruiting) significantly since Rob Jeter came to town. And then came word of two incredibly talented High School Juniors interested in playing their college ball at UWM. Madison East standout, Marquis Mason (6'5" SF/PF) and Milwaukee Custer's Calvin Godfrey (6'7" PF) have both given verbal commitment to join the Panther ranks starting 2010. While Godfrey was courted by Dayton, Missouri State, and Oregon State; Mason had offers from Marquette (under Tom Crean) and Green Bay. 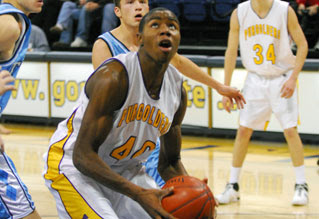 Per 2010 Player Rankings on Wishoops.net, Godfrey and Mason are ranked, respectively, as the #5 and #10 basketball prospects in the state for the 2010 recruiting class. 2010 seems like forever and a day away... but it's good to know that Jeter and Co. have brought in the kind of superior talent that UWM needs to once again shake up the landscape of NCAA D-I college basketball. It's a long ways off- but we're all looking forward to cheering on these players as Panthers in the coming years.