The Return of Avo

September 10, 2008
I had to chime in on this, because as upset as I was when Avery Smith lost his spot on the roster last year for 'conduct detrimental to the team', I am just as thrilled to announce that Avo, #0 himself (15.5 ppg, All-Horizon League in '06-'07), took care of business, got back on Rob Jeter's good graces, and is officially back on the team as a walk-on for '08-'09. Business as Usual? Bringing the memorable past back to the future? (Avo was on the '05-'06 team as well)

We'll see in due time, but it does seem to bode well from everything that has been said about this unlikely turnabout. Apparently, there is some very positive team chemistry brewing on the East Side of the city that Schlitz made famous. 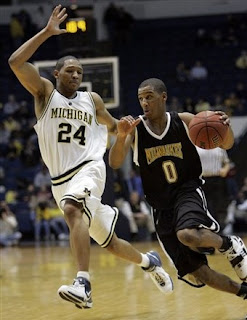 Avo, what can we say? Assuming whatever troubles you had with the team/coaches is a distant memory, and you play like the prolific defender/scorer you proved to be two seasons ago, I think all of Panther Nation agrees: you will help bring this team back to the top of the Horizon and provide much needed experience, leadership, and in-game flow control. Things were looking up before your return was confirmed. Now the season just got even better. Collectively we say, Avo, "WELCOME BACK".
Avery Smith Avo Milwaukee Basketball Milwaukee Basketball Program Milwaukee Panthers Rob Jeter