November 09, 2008
The Panthers finished out the pre-season with a well-rounded exhibition win over UW Parkside, 75-59. UWM lead from start to finish and managed to fend off any serious attack from the very talented D-II team down I-94 that beat Milwaukee in '06 (exhibition game). Lavonte Fenderson (13pts, 6rbs), and D.J. Dantzler (17pts, 2ast) led the charge for Parkside, but it wasn't enough to top this year's reloaded UWM Panther squad. 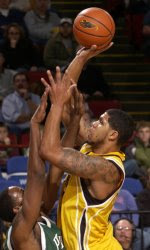 Anthony Hill, in keeping with the previous two pre-season contests, went off for 18pts (18pts, 9rbs, 47% FG) in just 17 minutes of floor time- Ant is already coming into his own as a true, D-I post player; and keep in mind- he is only a sophomore.

Avery Smith (14pts, 50% FG) continued the beginning of his improbable comeback and Tone Boyle (10pts, 6rbs, 2ast) as well as Tony Meiers (8pts, 9rbs, 3ast) played much better than in the first exhibition. Deion James and Ricky Franklin weren't as visible (as shooters that they are) as one would like to see.

Franklin only attempted 2 shots in his 17 minutes, hitting one three pointer, and James struggled from beyond the arc a bit (2-6 3pt); rest assured though that these experienced veteran guards will be major factors in nearly all the regular season games- they just had an off/quiet night last night.

It was nice to see the game safely in hand enough to get Zach Holt and Riley Walker some minutes at the end- Milwaukee hasn't had the luxury of offering so-called "garbage time" to anyone in the past 2 seasons (we narrowly escaped with a 3pt win against Parkside in last year's exhibition). UWM did shoot a disappointing 41% from the field overall- but that should get better as the best shooters on this team get "locked in" throughout the course of the season.

The biggest question mark is the status of Burleigh Porte (6'8" forward transfer from Olney Central). I mentioned earlier that Porte was said to have had a groin injury. No word on that injury, but Porte was not at last night's game due to a death in the family- we offer Burleigh and his family our sincere condolences and can't wait to see him out on the floor as a Milwaukee Panther.

First up for the '08-'09 regular season is the World Vision Classic in Ames, Iowa. The Panthers will play a game on each day of the tournament (Fri.- Loyola Marymount, Sat.- UC Davis, Sun.- Iowa State). So needless to say- the season will open up with a whirlwind of games with little rest in between. It looks like the hill running done in the off-season (to boost the Panthers' endurance and stamina) will get its first test.

I will be staying in Ames for the entire weekend and watching as many games as possible, so do check back for updates throughout the WVC Invitational. Here's to starting the season out on the right track. GO PANTHERS!!
'08-'09 UWM Basketball Anthony Hill Avery Smith Avo Lavonte Fenderson Milwaukee Panthers Rob Jeter Tone Boyle UW-Parkside