Game 2: Are You Kidding Me? (Panthers claw back from 24 point halftime deficit to defeat Aggies)

November 16, 2008
Nothing plays basketball like momentum. UWM had none of it in the first half of last night's game vs. Cal-Davis in UWM's second contest of the World Vision Classic. The second half on the other hand, was a completely different tale.

The Panthers looked sluggish and out of their element in the first half. Thanks to the refs biting on those good 'ol California acting skills of UC Davis players, UWM was once again mired in foul trouble from the get-go (James Eayres was called for two fouls literally within about 15 seconds of each other). 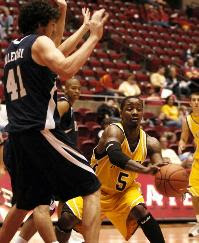 But those blind mice running the show cannot be blamed for even a 1/3 of UWM's first half troubles. We missed a ton of open shots, we missed free throw opportunities, and couldn't defend the perimeter or the paint. To make matters particularly dire- UC Davis seemed on fire. Three pointers, mid-range jumpers, baseline drives, post-up shots, free throws, fast breaks- you name it- they converted.

My friend noted how the Aggies seemed to make nearly every shot in warmups- that turned out to be an unsettling omen that came to life shortly after tip-off. Despite quickly taking a 7 point advantage on a Tony Meier three ball, things took a turn for the worse. The team looked listless as Cal Davis marched on and on. It seemed as if they couldn't miss- it had gotten "out of hand" before seven minutes had expired. You've gotta give the Aggies credit though- they can shoot the rock.

So rapidly throughout the first half, UC Davis built up what would stand as a 24 point lead by the time 20 minutes of basketball was in the books. The long odds (of even making this a single digit affair) were staggering. The UWM road warrior fan contingent (all 20 or so of us!) were deathly quiet and biting our collective fingernails- not out of anxiety for the almost assured lost we saw in front of us, but out of fear that what we were witnessing was the beginning of another subpar basketball season for the once-proud Panthers of Milwaukee's East Side. 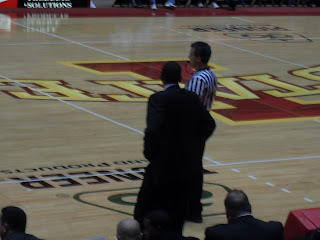 It was noted in the postgame interviews that a subdued Coach Jeter began speaking softly to his team in the locker room at half- but then Jeter snapped. He wasn't so much criticizing his guys for bad play-he was reminding them why they were here and what they were capable of. Because they clearly played like they didn't belong in Division I basketball, let alone in the World Vision Classic, during the first half last night.

Something funny followed Coach's tirade. Responding with a fire unseen in over two forgettable seasons of Milwaukee basketball, these Panthers did the un-doable- they actually completely erased that 24 point Aggie lead, and won the basketball game, 81-75.

It helped that the refs seemed to let the Panthers play a lot more in the second half; we saw once again that when you let this team play their game, they get very dangerous, very fast.

Ricky Franklin (18pts, 6ast) continued his clutch shooting in close games- knocking down the final three ball which capped UWM's lead at 6 points- all this after being down by 24 points at half. Indeed it was the steadying hand of Ricky and Deonte Roberts that helped the Panthers incrementally regain the confidence they showed all game against Loyola Marymount the previous night.

Notre Dame transfer Joe Harden was reduced to a non-factor in the second half, and UWM played excellent lock-down defense against the Aggies- denying their shots and passing options time and again. Tone Boyle hit a floating runner with under a minute to play to help bolster the Panthers lead, and Anthony Hill showed how far he has come in his development into a true post player with a picture perfect score down low which helped seal the deal and complete this memorable comeback.

The scene was surreal yet incredibly inspiring. The captivated group of us Panther fans rattled the echo chamber of the near minimum capacity Hilton (Ames sports fans were almost to a man at the Cyclones game against Mizzou down the road) with every single dent put into Cal-Davis' giant lead. The comeback was the biggest in school history (eclipsing a similar 21 point comeback against Virginia Tech in 2001).

So Rob Jeter evened up his all-time record at UWM to 47-47. Tonight (in just over an hour) UWM takes on an also-undefeated Iowa State team who is intent on sending the Panthers back to Milwaukee licking their wounds. 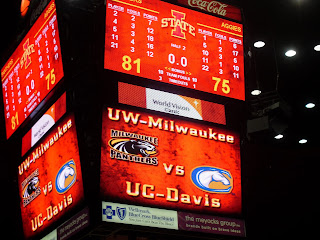 If things start clicking like we have seen so often in this early season, that might become a tall order for the Cyclones (also, Avery "Avo" Smith is finally eligible to play starting tonight- that will be something (hopefully very pretty) to watch). I hope we can sweep and begin a great start to this season. One thing is for sure- this year's team is a joy to watch (and report on!).