November 17, 2008
Well, I'm getting this post in a little late (as is usually the case!), but I'll briefly recap what I saw in this last game. Before I begin I have to congratulate the team on a successful tournament road trip. We could have lost 2 of these games, or came home win-less, but these guys played excellent hoops at times (as in the second half of the first two contests). Unfortunately, Sunday night versus the Cyclones of Iowa State was not one of those times. 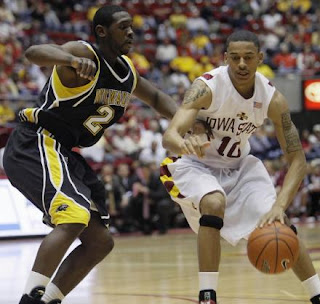 Freshman Tony Meier (who had played great on Friday and Saturday) had to sit this one out with a case of the flu, but we did get our first glimpse of Avo since the '06-'07 season. The Hilton Coliseum was filled with Cyclone fans (they had two huge student sections at each baseline that were very impressive). Every attempt at gaining the momentum in this one was drowned out by a clanging or swishing 3-pointer and a subsequent wild roar from the 13,000 strong I-State faithful.

Three pointers- talk about the story of the game. It was the exact opposite of our game against Loyola-Marymount on Friday to kick off the World Vision Classic. You can't expect to have many second chances when your opponent breaks its school record for most three point goals in a game (ISU's was 12- they sunk a jaw-dropping 15 treys Sunday night). Still, to make matters worse, UWM did not fire on all cylinders against the "Clones".

It was also the third game in as many days for the Panthers- but Iowa State was no less tired. This game came down to outside shooting, and the host team clearly had the upper hand all night. We kept the lead hovering around 12 points for a while, and even got as close as 4 with a little over 8 minutes left, but the sharpshooting of the Cyclone back court proved far too much of a challenge for Milwaukee.

We couldn't hit the broadside of a barn last night (.338 FG%). Even our high scorers (three players did reach double figures) didn't shoot particularly well (Tone was 5-16). If our shots would have fallen, we may have had a chance at keeping this one closer or even winning, but it just wasn't in the cards last night.

There were actually some good things to take away from this one though. James Eayres seemed to finally find his three point stroke (he hit two I believe- that quick release could prove deadly if he keeps it up). Avo only scored 8 points (in 26 minutes of action), but his defense and fluidity on offense showed that he is back indeed, and ready to play within the Jeter (swing-dribble/drive motion offense- where is that full court press though? we have so much depth to apply pressure and sub when needed!) system.

Had Tony Meier been healthy and Avo played the first two games to find his groove on the road trip- I believe we could have beaten the Clones- they did not dominate the post or play that great of defense by any means- they simply shot the floor out from under Milwaukee.

A 2-1 start to the season is to be cheered. Upper Iowa comes to town this Wednesday, and I'm sure some anger lingers amongst the Panthers from the stinging spanking at the hands of ISU last night. One game at a time.

Let's hope these Panthers show us that they are indeed back by defeating the Peacocks for a second year in a row (we won last year 78-53). I reiterate- one game at a time. We can never get too high or too low this season. If we can keep an even keel and win the games we are expected to win, spit the toss-ups, and seize on an upset or two (or three, or four!), this team could go far. But then again UWM can still win (or lose) every single challenge left.

That's why they play the games.