Marquette Buries Any Hope of a UWM Upset in Second Half

November 23, 2008
Much like the Panthers' last game against Upper Iowa- this game went pretty much according to script- for Marquette, who for the second year in a row, bested the University of Wisconsin-Milwaukee 100-80 in front of 15,698 fans (much less than last year's 21st Century debut of this intra-city series). 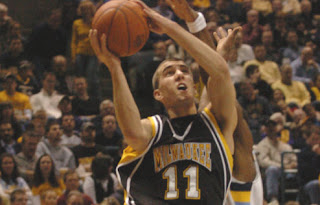 Other than their dismal field goal percentage (.379), the Panthers actually played a pretty good game- see the box score. With Tone Boyle (23pts, 5rbs) and Avery Smith (22pts, 6rbs) both scoring 20+ and Deonte Roberts dishing out 7 assists in just 25 minutes of play, one would think the Panthers could have won with the 80 points they put up. The Golden Eagles high-powered back court attack was just too much to handle- this game was doomed to be a double digit loss unless some serious defense stepped up.

UWM gave MU a brief scare early on, taking a 29-26 advantage after an Avery Smith three pointer, and they held on to that advantage up until about five minutes remained in the first half. Then Marquette found their nationally ranked ability, and took control of the game from there on out.

I'm sure Marquette is concerned that they gave up 80+ points for the second game in a row, both against low and Mid-Major programs. They may score triple digits on UWM and Chicago State this season, but they certainly will have a bit more trouble duplicating that kind of scoring against the beasts of the Big East (Pitt, Louisville, Syracuse, West Virginia, Notre Dame, UConn, Georgetown, etc.). That being said, corrections will be made, and Marquette will be among the top 3-4 teams in the Big east this season- they are a legitimate Elite Eight contender this year. I think this game helped Marquette a bit, but not near as much as it helped the Panthers. 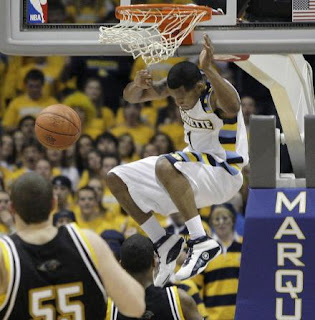 Playing against this kind of top-ranked talent will give this team the experience it needs to dominate against teams who are closer to the lever of a Horizon League Mid-Major. In the end, if the experience gained from beat downs suffered at the hands of Top 25 teams (like this one against Marquette), and the confidence gained from using that experience to crush more equally matched foes combines in just the right way, UWM might have a much better chance against Marquette-level opponents if they get good enough this season to get that opportunity-in March.

As said, I thought Milwaukee played a pretty darn good game against an incredibly talented, and very experienced Golden Eagle squad. I thought the Panthers could have played better (esp. on defense), but even then they would have likely lost by double digits. This Marquette team is just too good- only a long range 3 point assault (like the one Iowa State used to drop us!), or a chance MU off-night were going to make this one close or give the Panthers a real chance to win.

Viewing this series in the long term, while Marquette will usually have a much better chance each year because of the stature of their Big East program, UWM just may eek out an exciting victory here and there, making this more than just another non-con cupcake meal for Marquette. Outside of a few "vocal yokels", fans of Marquette, UWM (and fans of both teams) agree that this series is good for the city.

It's good for Milwaukee basketball, and (esp. if UWM can raise it's level of play to make this a competitive game each year) it will serve to build and reinforce the great basketball tradition this city has ('72 Bucks, Marquette's 1977 Championship and Al McGuire, MU's perennial basketball success in March (save a few years in the 1990's), Dwayne Wade and Marquette's 2003 Final Four appearance, UWM's improbable Sweet 16 run in 2005, etc.). If such success continues, when people think of Milwaukee, they will invariably think of college hoops.

Next up is Ball State in the friendly confines of the US Cellular Arena (my will it feel good to be back home!). Butler had a little trouble with Ball State, but this isn't the same Butler team of '07'-08'. UWM should be able to bounce back from the Marquette loss and handle the Cardinals of Ball State. This is a big game for the Panthers, as this coming Saturday, they travel to Madison to face the Badgers in an 11am match-up at the Kohl Center.

The good news is, this Panther team that we see now is only about 60% as good as the Panther team we will see at the end of the season. Or so we hope.
Avo Bradley Center Jeter Marquette Milwaukee Panthers Panther Hoops Panther Madness Rob Jeter Tone Boyle UWM