November 26, 2008
Rob Jeter thought the Milwaukee Panthers were prepared for the much-improved visiting Ball State Cardinal team last night. The Panthers were favored by 8 points, coming off a solid showing against #15 Marquette, and poised to make their begin making their mark on this season against a lesser non-conference opponent.

The team's performance was pathetic. There is no sugar coating and no way around it. Yes, Ball State shot 58% from the field, and they were probably a little better than the Panthers expected. But last night was tough to watch, even for the most optimistic of UWM fans. 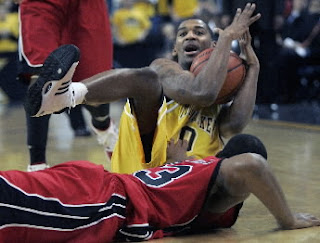 Tone Boyle (7pts, 4rbs, 1-4 from 3pt) and Tony Meier (5pts, 1rbs) couldn't get anything to fall- just missing on several threes which may have shifted the momentum enough for us to escape this one with a W. Anthony Hill converted 7 of 11 field goals on his way to 17 points and 5 rebounds, but his (and the entire team's) poor defense negated most of that contribution.

Ball State scored at will in the post. This team really needs to start locking down on the defensive end (esp. in the post... did somebody say Burleigh Porte?). Last night the team looked way too much like last years' team that suffered from this same kind of lazy (and outmatched) post defense. Hopefully this problem will be addressed- otherwise, (except for the few teams that we are bigger and taller than) the remainder of the schedule will be brutal.

Our inconsistency running any semblance of an offense is getting irritating. How a team with so many talented (and some even experienced in D-I!) players can look so clueless on offense is beyond me, the clueless fan. This is basketball- not hot potato. I expect things to improve as the season moves along but the trend being observed is deeply troubling- we seem to get less fluid (on offense and D) each game. It should be the other way around.

It's still way too early to tell how this team will fare, but I think it's safe to say that any thoughts of the Panthers running away with the Horizon League title have been completely erased. If we are going to compete for anything, we are going to have to correct the defense (esp. post defense) problem immediately, and start playing like we know what to do with the ball each time down the court. 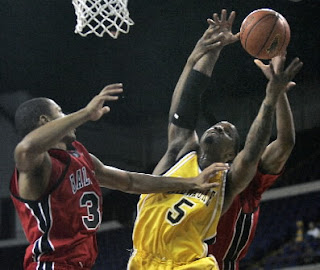 It's tough, because I really like this team and believe they can go far just as soon as they learn how to play together and shed their inexperienced "dis-jointedness". Ball State (and Marquette and Iowa State) means very little (other than a tie-breaker) for a UWM team whose sights are set on playing well in the conference to secure a good spot in the Horizon League Tournament.

The Badgers of Madison host UWM this coming Saturday after Thanksgiving. A win seems out of the question, but we'll take significant improvements just as soon as an upset. Tony Meier can play like he did the first two games in Ames- he needs to believe in himself. Ricky, Avo, Deonte, and Deion are team leaders- they need to command the troops and assert this quality better. So many players on this team seem looking for guidance, but Jeter can't go out on the floor. One or all of these veterans needs to keep everyone in a winning state of mind and on the same page. We need at least one leader on the floor at all times. These guys have shown they can do this. Veteran leadership and the skills these guys bring is one helluva formidable combination, if they'd just and I trust they will be the catalyst for any potential Panthers' turnaround in the next few games. 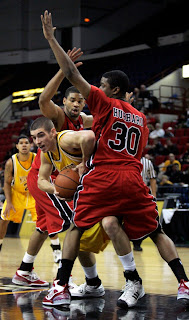 Anthony Hill has shown flashes of greatness on offense, but still fails to contain his man on D- he needs to play defense as strong as he is. Tone Boyle and James Eayres need their shots to start falling more consistently- it's gotta happen. And Burleigh Porte.... where the heck is Burleigh Porte? We really could have used his post presence against BSU.

Tenacious Panther Defense, wherever you are- now is the time to step up. Defense truly does win championships, just ask Bo Ryan. Last night had to be a wake up call to these guys- let's hope this is as bad as it gets.
Anthony Hill Avo Deion James Deonte Roberts Milwaukee Panthers Ricky Franklin Rob Jeter Tone Boyle Tony Meier