Back in the Win Column

January 12, 2009
Chalk it up. The Panthers (10-6, 5-1) just got their 10th win of the season tonight. After the festive crowd of about 5,000 last Friday to watch the Green Bay overtime loss, a paltry thousand-or-so person sampling of the Panther Proud witnessed UWM dispatch D-I newcomer, Southern Illinois University-Edwardsville, 70-59. 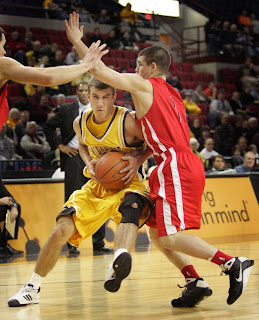 Big James Eayres (22pts, 12rbs, 2stl) continued his stellar transition from junior college to D-I. Eayres posted D-I career highs in both points and rebounds- his was a crucial double-double Milwaukee could not have afforded to miss tonight.

In accordance with the game plan, the Panthers substituted often. Tony Meier played 14 minutes, Anthony Hill (9pts, 8rbs) only 12), but the dissonance (of play- not emotions) was palpable. UWM shot 34%. Ricky Franklin was 2-10. Avo was 3-12. Most discouraging of all though- the Panthers gave up 19 turnovers- most them completely unforced. UWM did notch a school record for rebounds with a collection of 57 boards; but rebounds alone do not score points.

Fortunately, between Eayres' hot shooting and board gobbling, and Tone Boyle's (15pts, 7rbs, 2blk) perimeter shot, the Panthers were able to keep SIUE at bay- just enough, as Rob Jeter often quotes, "to find a way to win". And that was likely the entire purpose of this game.

Youngstown State comes to town Thursday and Cleveland State will enter the Cell for a Saturday game. With 3 games in 6 days (4 in 9), it would be wise to ensure we've got as many fresh legs as possible for the final two games in this stretch- the conference games that matter exponentially more than the non-conference game (with our current record- we have long ago kissed away any chance of an at-large NCAA berth (which Butler would likely get if it needs it)).

For those who may not know, the top two seeds in the Horizon League get a "double-bye"- that is correct, a double-bye. The regular season first and second place Horizon teams essentially skip ahead directly to the Semi-Finals. That's how it works in our league, and that is why winning in conference (and working for one of those two coveted seeds) is so vitally important.

But I get ahead of myself.. Youngstown State stands in the way of conference victory #6. Thursday night is going to represent the most important game we've played against the Penguins in several years. With the unexpected fast start to conference play- everyone in the Horizon is already looking to take out UWM when they get that chance. The '08-'09 Panther squad has faced many challenges this season, and taken most head-on; the team seems to have improved dramatically since the loss at Miami (OH).

But you can never look past a single game and I know pre-season Horizon League favorite Cleveland State is on many Panther fans' minds. We can afford that luxury of gazing into the future a bit, and looking at the bright possibilities- the team sure can't. I think they'll be alright- so long as they just learn how to consistently and skillfully, take care of the little things. They'll get there. 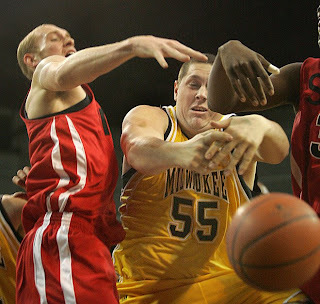