January 06, 2009
UWM fans haven't had a whole lot to get excited about (much less stay excited about) in the past 2+ years. The 9-22 "empty cupboard" season provided some glimpses of future Panther superstar Avery, "Avo" Smith that we now see before us in this, his last, and best season. 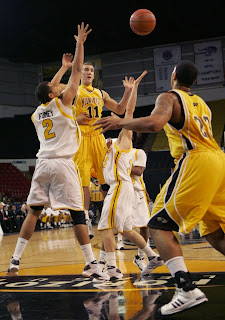 There was the heralded, not-so-dynamic Chicago Simeon duo that came in with much fanfare and left with very little (bad, if any) substance. Paige Paulsen wowed us with his long range bombing campaign throughout the '07-'08 season.... That was all entertaining- if only to the more fanatic of Panther fans.

But let's be honest- after reaching for the stars twice in two years (just three and four short seasons ago...) defeating Alabama, and then Boston College to reach the Sweet 16 of the 2005 NCAA Tournament and besting Kelvin Sampson's Oklahoma in 2006 only to lose to eventual tournament champion Florida in Round 2, 9-22, and 14-16 (albeit a thrilling and emotional 14-16) seasons, each followed up with exactly zero postseason victories in the Horizon League Tourney, can kinda feel like the lyrics to the track, "The Thrill is Gone", popularized by B.B. King.

At the time of dire need to satiate a fickle fan base, a Milwaukee Panther squad is currently emerging that could, at the very least, very well do something about that winless postseason streak of 2 long years. Last night the undefeated Panthers (9-5, 5-0) took down yet another Horizon League foe, as they defeated Valparaiso, 61-47- this time back in the friendly environs of the US Cellular Arena in front of a modest crowd of just over 3,000 souls. And you guessed it- the usual suspects fueled the brunt of the Panthers' attack. 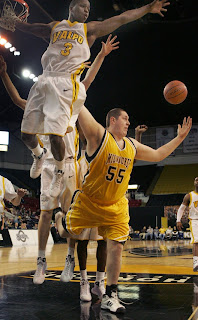 Avery Smith dropped 22 points and Tone Boyle had 10. Anthony Hill battled back from a miserable 1st Half to put together his best 20-minute performance to date. His 9 points and 7 rebounds were key to keeping the Crusaders down and out last night. Tony Meier and Ricky had 8 points apiece (does Rick seriously have a potential year of eligibility left? ...we could have unmatched senior leadership next year as well).

But it wasn't all rosy. The 61 points the team scored was the fewest all season. The first half of this contest was repelling to be kind- easily the sloppiest play and worst shooting of the year for both teams. Fortunately, Jeter was able to get the guys to look past the situation that the 1st Half left them in (the team launched and missed all of 11 three point attempts before the break), and seize momentum and the game back- in a hurry.

Momentum was indeed transferred to the Panthers early in the second half- in fact after four three pointers and a 35-27 lead, Milwaukee never looked back. The entire second half was a clinic on maintaining a solid, cushioned lead. Things to take away from this game include the admirable ability of UWM to not fold after their own sloppy play and an early lead by their opponent. The Panthers held their ground, and managed to find another way to win. 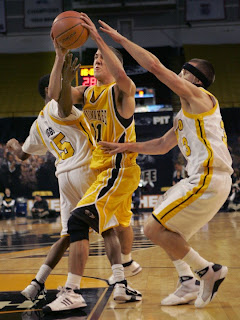 This team has been finding a lot of ways to win recently (they've now won 6 of their last 7 games). It was a quiet night for a lot of Panthers- maybe they are saving their best game of the week for Friday? Hopefully, this winning mentality never leaves (even after an unexpected loss- that loss won't come this Friday; but it will inevitably come at some point). The guys over at the Horizon League website have put up a steep challenge to UWM fans for the huge game versus Green Bay this Friday night at 8:00pm (downtown at the Cell, as always).

I sure hope the attendance is good (but doubt it would be anywhere near that Milwaukee-Detroit HL Championship photo seen in that link!) for this, the biggest home game so far, four seasons into the Jeter Era; word on the street is that 4,000 tickets have already been pre-sold. Even if you you are just a college basketball fan in the area and don't care about UWM or Green Bay, get out to see this game; you will witness a great game of a great Horizon League and Wisconsin college rivalry. It will be nationally broadcast, live on ESPNU; but I can't urge you more- get out to this game. This one is for half of East Wisconsin's bragging rights (with the other half settled at the Resch Center in early February). And a whole lot more...