January 11, 2009
The University of Wisconsin-Green Bay Phoenix came into the Cell for a blood match with UWM Friday night in what is maturing into a serious rivalry (both teams have been rivals as members of the Horizon League and earlier, the defunct MCC conference for over a decade). They made it out alive, and knocked the Panthers off the #1 spot in the Horizon standings (although, one must admit, it was a little strange seeing "Milwaukee", above "#20/21 Butler" for a short time...). 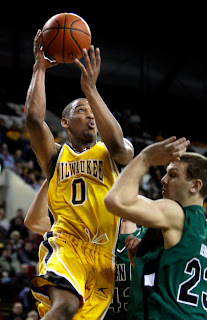 Green Bay just came out with more intensity on this night. From The lightening-quick lane moves of Ramon Fletcher to the floor-slap-happy Ryan Tillema, everyone in the building could tell that the Phoenix wanted this game more- until about five minutes before the end of regulation.

The first half was largely dictated by the Phoenix. Green Bay seemed to find a very effective method of alternating between having Fletcher strike through the lane, and then going left for the bucket, and having Ryan Tillema (a senior 6'8" swingman who has dramatically improved since last season) set 'em up and knock 'em down from the perimeter.

UWM did everything they could to stay in the game (Ant almost singlehandedly kept us in the game for a five minute stretch at one point- without his burgeoning strength and shooting in the post (which is a very welcome sight), we would have been buried in an insurmountable hole.

Milwaukee, ever-ready to completely transform when you least expect it, started digging into the Green Bay lead late in the game. With the game winding down and UWM down by a pair, Terry Evans was fouled (Evans although a 75%+ FT shooter, is one of the worst , on a UWBG team that is among the national leaders in FT shooting %). 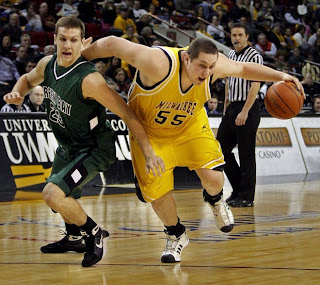 Evans sunk the first, and, as fate would have it, his second shot caromed off the side of the rim. The Panthers quickly pushed the ball up court and assessed the options. Who other than, Big James, Big "Lumber" (as coined by the ESPNU announcers) James Eayres takes a catch and shoot and absolutely nails the game-tying three. Shortly after (some ferocious defense and another UWM bucket), the Panthers actually found themselves up by two points with just over a minute to play.

Ryan Tilemma tied the game on free throws, and while it was thrilling to take this one to overtime- ultimately, we got torched by the burning birds. Ricky had a chance runner as regulation expired- not even close. Eayres had another chance to tie (or was it make it 1pt?) late in OT, and again, nothing. 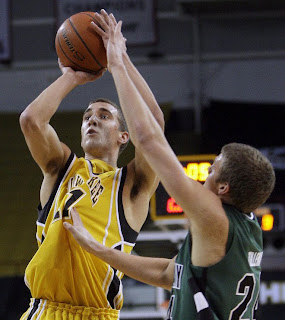 It just wasn't our night (other than from the foul line- Milwaukee was a perfect 20 for 20 from the charity stripe, setting a school and Horizon League record). That's all well and good- but unfortunately, we did not get a single call when it mattered most in the closing minutes of regulation and in overtime. You can never, ever blame a loss on the refs alone. The refereeing did not help get this victory- but neither does playing like 55% the team you are.

After shooting a freezing cold 37% from the field (and somewhere in the mid-20's in the first half), what can you expect?

(The below was copied from the Milwaukee Athletics website)
Pretty astounding, huh? We can beat a team like Valpo (when they are down) playing like that, but good luck trying to eke out a win at Hinkle with those numbers! Geez... I hope the past two games have just been an aberration.

UWM hosts Division I newcomer "SIU-Edwardsville" (no, that's not the Saluki's!) this Monday night at 7pm at the Cell downtown. After streaking out to a 5-0 (now 5-1) conference record, the Panthers need this game to notch double digit victories and get the poise and swagger that will be needed when we return to league play later this week. 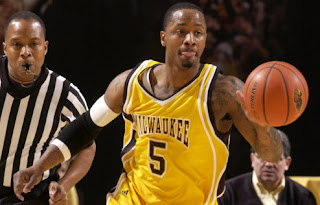 Can't look past this game (SIU-E is 5-12 in their inaugural D-I campaign). After how all of us Panther fans felt after the Green Bay game, I can't imagine the team is thinking about anything other than getting back out on the court and playing to win- both halves.

These next two games could be huge confidence boosters if these Panthers can play at the top of their game- both halves, for once. If we could just, for every game forward, take our first half play against Marquette, and our second half play against UC Davis, and fuse it into 40 minutes of in-your-face, tenacious, sharp-shooting, crisp-passing Milwaukee basketball.... big things could happen before it's all over.