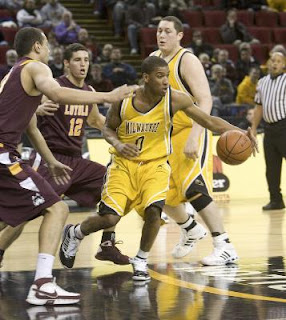 The University of Wisconsin at Milwaukee men's basketball team picked themselves up off the floor against Loyola last night (after being kicked in the teeth and left for dead following a dreadful road trip through Indiana last week). Your Milwaukee Panthers (13-8, 8-3) were just happy to be home; as they defeated Loyola, 72-58, in front of 3,400 of the Panther faithful at the Cell.

And we are definitely happy to see the return of UWM's aggressive style of play after the two lethargic and uninspired games against Valparaiso and Butler. Other than shooting (we made meager improvements, but still shot only 35% from the field), the team that controlled the floor last night looked like a team that would've beat Valpo and at least give Butler a scare.

The win last night was huge. The Panthers set a school record for most total rebounds and most offensive rebounds in a game. They collected a staggering 59 on the night- 34 on the offensive end. Unfortunately, as good as it sounds, that is testament to how many shots they missed!

But seeing this team bang down low and make opposing bigs and guards respect the Panthers authority is a pleasant sight indeed (other than Marcus Skinner and Jason Averkamp, we didn't have the kind of carom collectors that this year's team boasts with Ant, Burliegh "The Door" Porte, Big Lumber, Avo, Ricky Franklin (The General), and Tony Meier.

Avo certainly filled up the stat sheet as he scored a team high 17 to go along with 13 boards (career best), 6 assists (don't ever call this man selfish- this year's Avo knows that he has many options to get it done if he can't find a shot), and 2 steals. Tone (15pts), Rick (13pts), and James Earys (10pts) also tallied double digit point totals and helped lead the Panther attack. 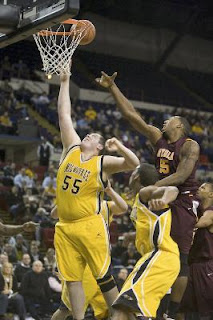 While he may not have had the best stat line of the night (but certainly a very good one, especially in light of his (and Avo's) recent slump), I believe Ricky Franklin keyed this victory in the opening minutes of the game. Within 18 seconds, Rick dropped in a trey for the first points of the game. In the following 3-4 minutes, Franklin proceeded to hit 2 more from long distance, giving the Panthers a nice early lead- a lead that wouldn't be seriously threatened all night. For a team coming off the kinds of losses we just endured, The General's hot hand provided exactly the kind of mental shift this team badly needed. Tone hit the big shots when he needed to; Ant showed his continued transformation into a forward that opponents must respect.

Most impressive of all though (if only because we hardly ever get a chance to see him!), "The Door" (Porte) showed off his incredible defensive toolbox in the paint. It was pure entertainment to watch "Door-slam" after Door-slam, as, in his brief 9 minutes of floor time, Burleigh ferociously rejected the shots of two (could have been 3, if it weren't for an iffy foul call) Ramblers who dared drive into the post. It will be fun to see Porte grow as a player and begin to pick up more minutes this year or next- I honestly think he could average double digit rebounds and 3-4 blocks a game if he is in there enough. 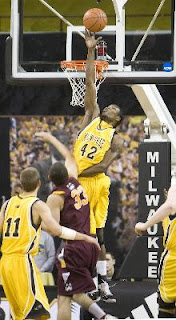 One thing that struck me last night is the fact that UWM's defense seems to have the most trouble preventing opponents from scoring cheap bunny shots right underneath the basket- it goes without saying that this would not fly under The Door's watch- Porte could seriously prevent 10-15 points a game in this way (keeping opponents honest and door-slamming any who try their luck at beating him in the post). He is a bit of an offensive liability (and shouldn't be in there when we're shooting bad), but we have a bevy of scoring threats on the floor at all times. His arms are seriously almost as long as Zach Holt's entire body.

Avo did an excellent job penetrating the lane (a la the dribble drive that has become so ubiquitous during the Jeter era), but still doing it within the offense and kicking the ball out or around the perimeter when needed. Big Lumber had a bit of an off-night, but was still quite effective eating up space (and thus boards) in the post, and Deion showed the steady hand of a senior and helped limit the turnovers that had plagued this team in the past few games so badly.

The only down notes I can think of are for one, Deonte Roberts was absent for unknown reasons (reportedly having nothing to do with grades or disciplinary action) and the fact that, even though he has done enough to maintain his starting spot and solid share of minutes, Tony Meier continues to struggle playing effectively in the post against bigs who are almost always twice his size.

Meier is still a deadly swing forward, and I think we can all agree that once he build up his frame and low-post skill set, Meier will likely be a huge force in the years to come. We have to remember (remember Ant's struggles last year adjusting to the rigors of the D-I forward position?), Tony is just a freshman (he probably could have red shirted with Haggerty). He'll be just fine, and I'll even go so far as to say he may start playing like he did at the World Vision Classic by season's end. 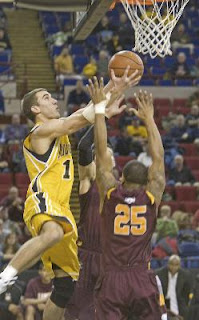 There is an old African proverb that says, "Smooth seas do not make skilled sailors". With the near-perfect storms that have engulfed the Panthers early in the season (Iowa State, Marquette, Wisconsin, Ball State, Miami (OH)) and as recently as last weekend in Indiana, Milwaukee has had no shortage of turbulence in this season's voyage.

Here's to hoping those experiences have provided enough skill for UWM to sail straight into a postseason tournament come mid-March. Let's grab that momentum back and never let go.

UWM hosts UIC at the Cell, this Saturday (1/31) at 7pm. The home court has been friendly to the Panthers thus far (so far, 9-2 record on the new and improved, "Milwaukee" floor). The student turnout for last night's game was pretty impressive (at least 200, probably more). I have a feeling that, despite the demoralizing losses to Valpo and Butler, the word is starting to get around campus- Pssssst! They're baaaaaaack...