Too Close For Comfort (But We'll Take It)

January 17, 2009
It was almost an epic collapse. Fortunately for Panther fans, it wasn't. UWM, who held about a 10 point advantage all night long against a very good Cleveland State team, allowed the Vikings to close a 19 point margin with less than 5 minutes to go in the game. It was scary for all who witnessed. But a win is a win is win- get it? "W", and that left side of the W/L column us all that matters. 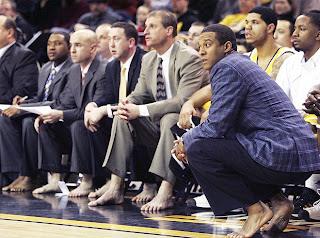 Rob Jeter and the rest of UWM's coaching staff went without shoes tonight in a gesture of solidarity with IUPUI coach Ron Hunter who is using the shoeless endeavor as a way to bring awareness to poor folks across the globe who don't even have the simple luxury of shoes to protect their feet.

Notable performances tonight included Tone Boyle (12pts, 8rbs, 2ast, 2stl), Avery Smith (11pts, 8rbs, 2ast, 2stl), and Tony Meier (8pts, 3rbs, 2ast) Meier seems to be coming out of his slump very nicely- his two three-pointers came at crucial times to keep the mo' going for Milwaukee. But the players of the night for the Panthers were two of our forwards- "Big Lumber" James Earys (23pts*, 9rbs) and Anthony "Ant" Hill (20pts*, 2ast, 2blk) destroyed the competition and kept the Panthers a cut above the Vikings all night- that is, until the very end of the game.

The Panthers played their most impressive basketball of the season for the first 37 minutes. "Closing the deal" seemed to be a problem as the team got lazy and mistake-prone to allow CSU their big comeback chance. UWM should have won this game by double-digits, and could have actually won by 20 had they extended their relentless push beyond the 37 minutes it lasted. 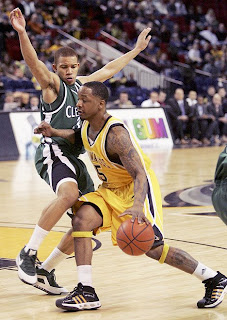 Credit must be given to Cleveland State though. They didn't play that bad of a game; they seemed to save their best for last. Norris Cole, J'Nathan Bullock, and Cedric Jackson combined for 5 straight triples to close out the game- they were a mere shot away from dashing the hopes and dreams of all Panther fans who thought this season was on the way to some kind of tournament in March (well, that may be a bit dramatic, but winning and confidence is a hell of a thing)). It was a huge relief to get this victory.

With this game and a successful 4-1 home stand in the books (should have been 5-0... 'can't wait for revenge at the Resch Center!), UWM goes on the road to Indiana for a pair of games . Valparaiso welcomes the Panthers this Thursday, and arch rival Butler opens up the historic Hinkle Fieldhouse two days later for Milwaukee (that is- arch rival when we're both doing well, which is currently clearly the case). The game against the Bulldogs could be Horizon's #1 vs. #2, but we've gotta take care of business at Valpo first. 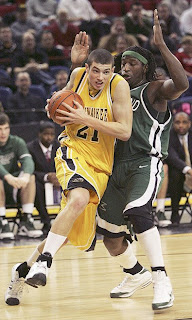 Tune in to Time Warner Sports Channel 32 to watch this UWM team as they attempt to continue their rise to the top of the Horizon. Valparaiso isn't having a stellar season, but make no mistake, any road game, and especially any league road game, is tough. The most important game of the season is this next game- it'll be that way from here on out. Even if we're hundred of miles away, let's cheer on this team and hope for another victory Thursday night. So far- they've certainly given us a helluva lot to cheer about.

**Big Lumber actually had slightly better numbers on the night, but numbers don't tell the whole story. Ant was the difference in this game. He made the shots that we needed early on and late in the game- all at crucial times- all of which deflated Cleveland State, just when they thought they were digging into the Panthers lead.
'08-'09 UWM Basketball Anthony Hill Avery Smith James Earys Milwaukee Panthers Rob Jeter Ron Hunter Samaritan's Feet Tone Boyle Tony Meier