January 24, 2009
There is something about road games (outside of Chicago) that seems to throw the Panthers' equilibrium into a chaotic spin. After playing their worst game of the season since going ice cold against Miami (OH) at Valpo last Thursday, UWM did themselves one worse today- much worse, and Butler asserted their Horizon League dominance dropping the Panthers, 78-48. That's right, UWM was on the losing end of a 30 point margin. 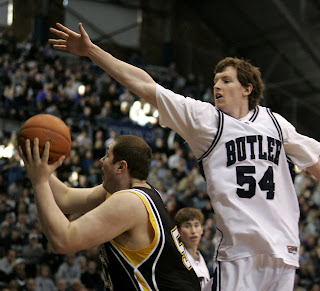 It was pretty tough to watch this game on TV, fighting the urge to turn it off and think about something a little more pleasant. But I, and many of you "tried and true" fans know that you've gotta take the highs with the lows, and hope against hope that everything will settle into nice shape after the season has run its course.

The game recap is pretty straightforward and as follows (not much drama or changes in momentum). Butler started the game out with Matt Howard winning the tip (Ant- where are your hops at?). The Bulldogs then went to work with their patented style of passing around the perimeter until someone has an open look at a three. Surprisingly, throughout much of the first half, Butler was only hitting around 20-25% of these perimeter shots.

UWM was essentially handed a ticket into the game time after time after time. And they did what they did so often against Valparaiso- either they turned over the gifts they kept getting, or they put up off-balance, contested bricks and saw the Bulldogs lead increase- slowly, but very surely.

In the second half, UWM wasn't so lucky. Butler began playing like the nationally ranked team they are, and completely obliterated Milwaukee. The team should be embarrassed by their performance- especially in the second half. Uninspired, lethargic, confused... these are just a couple of adjectives that come to mind.

Butler packed Hinkle Fieldhouse in preparation for what their fans thought would be a great college basketball game. We gave them- the Washington Generals. There isn't much else to say about the rest of the game. Milwaukee's shooting percentage "skyrocketed" from the 12% or so in the first half, all the way up to about 24% in the second (Panthers shot 24% overall). The turnovers and cold shooting spells need to be addressed, or this team will go nowhere.

Another very important observation that many have brought to light, is the fact that recently Avo and Ricky Franklin have been completely absent. Franklin and Smith combined for 3 field goals in the entire Indiana road trip. These are upperclassmen leaders who should have combined for over 40 points in these two games.

Additionally, from the deer-in-the-headlights looks that began once Valpo started their run on Thursday night and haven't left since, you could feel the need for some senior leadership to calm down the younger guys and keep the train on track. Sadly, neither Avery or Ricky stepped up to provide this leadership. Neither did Deion (another senior). What resulted was UWM's best version of "Who's Ball is it Anyway?". I am confident that, should they realize the dire need for them to step up and command the troops (team meeting anyone?), the newer, younger guys will respond, and get back to doing what they do best- play rock-solid, winning college basketball.

Last season, the Panthers improved from 9-22 in '06-'07 to 14-16. What with the not-too-far removed hot winning stretch, this Milwaukee squad has put itself in a great position to improve once again. 16-14? 17-13? 18-12? 19-11? Anyway you cut it, we only have to win three more contests to make this season a little better than the last. But to settle for such meager incremental improvements would be to stifle the program's growth and acquiesce to a new "era of mediocrity".

I guess what I mean to say is, while this team has completely folded under adversity, they have shown that they can play at a high level and put away teams (excepting the Valpo debacle) that they are expected to put away. How can they reach that next level? I don't know. But I will say, that even as optimistic as I am about this team- when I'm really honest with my homer-self, I have to admit that there are a lot of disconcerting gaps, lapses on the court, and awesome talent that is unfortunately, still quite rough around the edges. That is not to say that those edges cannot be smoothed in the remaining five weeks of Horizon League play. If they work for it- there may be something to play for come late February.

The team must put this Indiana road trip behind them. As great as it felt to be 12-6, many of us knew that it was only a matter of time (or road trips) before the magic halted. It's unfortunate that the Panthers' momentum didn't just slow a little- it completely froze up. But the team returns home this coming Thursday to face the two Horizon Chicago schools that they put away just a few weeks ago- on their courts. If losing has frayed some relationships or created some tension in what seemed just a week ago like perfect chemistry- that tension needs to stop now. The team needs to be coherent now more than ever. 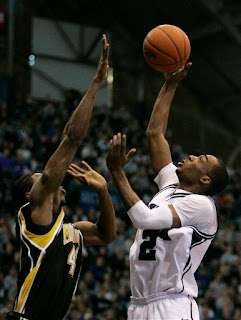 Let's hope that Jeter and the coaches get this team ready for this upcoming two game home stand- both physically and mentally (in both the Valpo and Butler games, the entire team seemed to play like they had cinder blocks tied to their feet). If people were looking to see how the Panthers would react to adversity like they had to (and succeeded) last season, here you go.

After winning 9 of 11, we've dropped two straight, but are still in third place in the league. Green Bay and Wright State are sandwiched ahead of and behind us, respectively. We can't afford to lose any more games like Valparaiso or Ball State (games that we should have won had the team played at 1/2 their ability). From here on out, (assuming Butler doesn't crash and burn- somehow after today I am convinced that will never happen), it's all about that second place spot which holds the key to the precious second seed in the conference tournament.

The team may not yet be ready to compete with the Butlers and Marquettes and the Wisconsins of the world (although I'd like to say if they worked tirelessly to reduce the stupefying amount of stupid mistakes they make, they definitely could). But we should be ready to take on the rest of the Horizon schedule with a full head of steam, and maybe, just maybe, next time the Panthers get another crack at Butler (Feb. 18th at the Cell), they'll make it a game and not a torture session.