February 19, 2009
Battered and bruised. Down and out. Left for dead in Horizon League limbo. 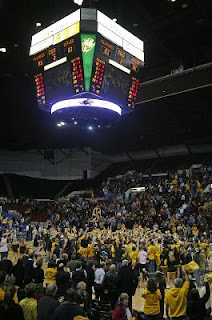 There were many different disparaging phrases to describe the Panthers play as of late, but none of those would apply after UWM shocked #21 Butler (and most Panther fans including myself) by defeating the 'Dawgs, 63-60 in front of 5,000+ last night at the Cell.

From the opening tip, there seemed to be a vibe of retaliation in the air. You could almost hear the thoughts of the Panther defenders as they applied their ultra-physical superglue D on a bewildered Butler team used to opponents playing timid and utterly over matched. "Not this time. Not this game. Not after our trip to your place in Indy. Not on our home court. We've lost 3 games in a row that we should have won, and we don't care if Butler is #1 in the nation. We are not backing down an inch".

That mindset translated into missed Bulldog shots, and turnovers, and steals, and yes- buckets. UWM had Butler on the ropes, up by 6 points- 29-23, by halftime. During the intermission I talked to some fellow Panther fans and while the conversations were generally jovial, they all shared a common thread. Everything to that point in the game looked pretty good, but for a team that has struggled to get over the hump in recent times, a lingering sense of doubt subdued any real excitement.

Until the second half unfolded. 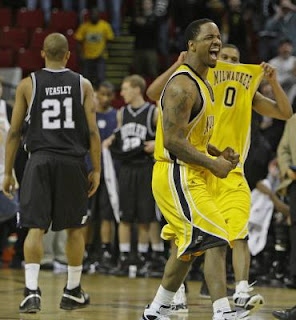 Ricky Franklin and Big Lumber drained some incredibly timely 3 balls, to decimate the Butler resurgence every time it reared for another attack. The way bodies were flying to the ball on each possession was reminiscent of a football game. Swarms of gold impeded Butler's well honed and high-major, battle tested play executions. Time and again, the Panther players would wrest the rock away from a surprised Bulldog.

Offensively, UWM actually had another one of their freezing cold shooting nights as the Panthers were just 20-58 (.345) from the field. But their lock-down, swallow the key defense, was more than enough to make up for the lack of shooting touch. They did just enough though, and they took care of those little things that put you over the top when you put yourself in a position to win- free throws, creating turnovers and protecting the ball, aggressive rebounding, limiting opponent's second chances and creating several of your own. Above all else- hustle. The intensity on display by the guys in gold delivered UWM this victory. Those treks up and down St. Mary's hill during the summer are not for naught!

It must be mentioned, that this game was not without it's complaints (which usually come exclusively from our fans- watching Horizon League refereeing can be like entering surgery or dealing with a swindling con-man, sometimes). Apparently, the game clock was started a second too early before Butler made the game's final inbound. But it wouldn't have mattered. The "free second" hardly made up for a series of very suspicious calls in the final minutes that almost allowed Butler to steal a victory and sneak out of town unscathed. 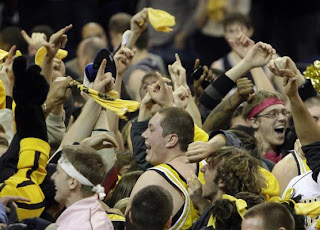 Of course some talking heads were more concerned with the clock "controversy" than Butler's own players. Gordon Haywood admitted, "The last play really didn't win the game. We got out-toughed the whole game, and we didn't deserve to win." UWM certainly did outplay the Bulldogs, who were previously nationally ranked as high as 11- especially on the defensive side of the ball. For a program that has oft been criticized for it's abandonment of the Bruce Pearl Era pressing that was our trump card in the 2005 NCAA Tournament run, it is a very beautiful thing to see the Panthers shut down an elite opposing offense like the team did last night.

You really had to be there to understand how emotionally uplifting this victory was. Statistically speaking, the win was a minor sea change- it marked the very first time that Milwaukee has ever- ever beaten a ranked opponent during the regular season. While we took down Alabama, Boston College, and Oklahoma in March 2005 and 2006 and Butler in the 2003 Horizon League Tourney, not once have the Panthers beaten a top 25 team before the post-season.

As fans, it's easy to lose sight of the long view, but when you really look at what has happened since March of 2006, some very exciting things have begun evolving- many have gone unnoticed or fallen subject to our collective short-term memory. It's quite a long process to build a basketball program and instill a system or "brand" of basketball at a university. 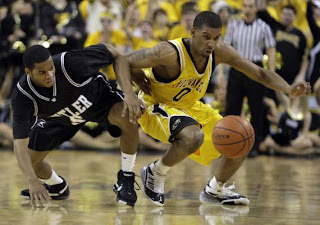 Questions always abound, but after last night it sure seems like Coach Jeter is on the right track. The future is bright for Milwaukee Panther Basketball; but I think we are all more eager to find out how far the current team can go.

It may just be that this is a sign of things to come. After all, to become a great program, you have to start somewhere. Ideally, a game like last night will be something that happens several times a season. I couldn't be more proud of this Panther team. My biggest criticism all along has been on their prior inability to dismantle the big-time talent (Iowa State, Marquette, Wisconsin, etc.). They just blew that skepticism out of the water.

So will UWM bring the heat to North Dakota State this Saturday night like they did to the Bulldogs last night? Can this team close out the regular season with a momentous winning streak? Does a tournament-style rematch with either Butler, Green Bay, or (gasp) both loom in the not-to-distant future? For the answers to these titillating questions and more... hang on tight and don't spill your beer (sorry Jason). Things could get very entertaining in Brew City if the pieces oh-so-fortuitously, fall into place. 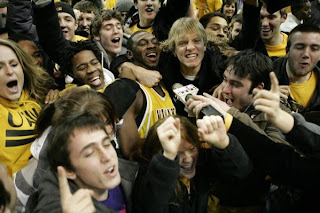