February 01, 2009
Your Milwaukee Panthers did not deserve to win this game. But after the euphoria that swept through the US Cellular Arena last night, who really cares what was supposed to happen? 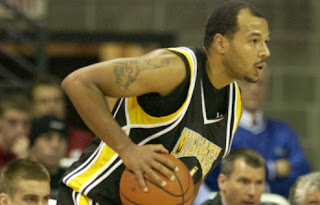 After trailing the UIC Flames by double digits all night long, something very Pantherlike happened in the final two minutes. Like Ball State and Detroit last year, and Cal Davis this year, UWM mounted an improbable comeback- only this one happened in such a short time frame (99 seconds to be exact), it seemed all the more surreal.

With the Panthers trailing by 10 and only 1:39 on the clock, Jeter called for his players to begin the auto-foul routine that so often just prolongs the inevitable, it began. The Panthers surveyed the shot opportunities as the clock ticked down, and all of the sudden- Bam! Tone Boyle nailed a triple to cut the margin to 7.

A few seconds and one made free throw by the UIC's Robo Kreps later.... Three! Again, Tone drilled a long distance shot to cut the lead to 5. Kris Harris was then auto-fouled, and was loudly rattled by UWM's packed and boisterous student section- he missed both. Tony Meier would be the last Panther to cut into the Flames seemingly insurmountable lead as he exhibited his excellent stroke from beyond the arc- another three. UWM then trailed by only two points.

Harris again missed both free throws and UWM charged ahead down only two points, 62-60. With no clear perimeter shots open, Tone Boyle eventually cut through the lane to attempt what would have been the game-tying shot. No such luck as it glanced the front of the rim and UIC collected the board. Less than 10 seconds remained. Harris, still in the game for reasons only known to UIC coach Jimmy Collins, was fouled- again. And in keeping with the script of these final two minutes, he again missed both throws from the line.

Meier grabbed the final and most important board of the night and fed Ricky Franklin who brought the ball three quarters of the way up half court and sent a long pass over to the SE corner of the floor to a guarded Deion James. James dribbled in and out to lose his defender and let loose a rainbow of a 3 point attempt. The ball sailed high and true and when it finally splashed through the nylon, the crowd (and Milwaukee Panther players and coaches) went bonkers. UWM senior, Deion James proved to be the hero of the night- and he, of all the hard workers on the team, most definately deserves it.

Indeed, UIC played better than UWM for all but the final 2 minutes of this contest. All that matters is that final tally; but it is quite obvious (yet again) that the Panthers must do something about their inconsistency or they will be left out in the cold come NCAA, NIT, CBI, or Fox's new College Basketball Insider Invitational Tournament time. Hell, any post-season tournament would be a welcome invitation for this UWM program which has gone 9-22 and 14-16 the past two seasons after 3 NCAA Tournament appearances in four years. To reach that next step though, shooting and turnovers (paramount but among other improvements in the little things that have been fairly solid) must be improved considerably and far more limited- respectively.

The player of the game for the Panthers was someone many of us had all but given up on for this season. Tony Meier- that lanky kid from Wildwood, MO, who went from fan favorite to starting lineup liability after several lackluster performances, played his heart out.

Meier showed exactly why the Milwaukee coaches were so high on him and why he starts as a freshman on a team with other, more experienced forwards. Major props to Tony for his best game of this season- we can only hope that this game gave Tony the confidence he needs to be a post and outside threat, in the coming critical weeks which will decide this team's ultimate fate.

James Eayrs, Deonte Roberts, Tone Boyle, and Avo all put in solid minutes, but without Tony Meier and Deion James, this game would have been another example of the heavily talented Milwaukee Panthers laying an egg when they needed a stellar performance to keep pace for the holy grail of Horizon conference play (that second place tournament seed).

UWM has a full week to collect themselves and and reflect on the mistakes (mostly just awful shooting and subpar defense). You have to concede that it's hard for any of our forwards to guard or out-rebound 7'0" Scott VanderMeer though... If he could have made more than 2 of his 11 attempts, we would have likely been destroyed unless Burleigh and his moon hops was brought in to negate that height advantage.

Green Bay is up next, and so the in-state rivalry heats up. In case you missed it, UWGB bested the Panthers here in Milwaukee in a heart breaker of an OT game. The Panthers have had a lot of time to watch video of that game and prepare for the uber-important rematch set for this Saturday, Feb. 7th at the Resch Center in Green Bay. I'll be making the trek and bringing my cousin along (a Green Bay resident)- he (an Illinois State grad), along with many other friends of mine, are starting to admire this never-say-die group of Panther ballers.

I hope you'll consider adding to the UWM visiting fan section if you live within road trip distance. If not, as always the game will be broadcast on Time Warner Cable Channel 32 with Darron Sutton (former Brewers broadcaster now with the Arizona Diamondbacks (but always a Panther fan)) and Jason Clark calling the game. Last night was bittersweet in that we won the game, but not in the convincing fashion many had hoped. It is the Horizon League and anything can happen. I won't be surprised in the least if even Butler is taken down a peg or two before it's all over.

The only thing that matters for us, is this next game versus the Phoenix. If our guard play can shut down Cotton and Co. and Ant, Big Lumber, The Door (Burleigh Porte), and Tony Meier can neutralize Mike Shachtner and Ryan Tillema, we might just be on the way to wresting that second place spot back from Green Bay. They currently own it- and they currently deserve it. But let's consider the future now, shall we?