February 08, 2009
All season the Milwaukee Panthers have been up and down- finding a way to win in the most unlikely circumstances, but just as likely to drop a game that is all but locked up. Last night was one of the latter scenarios. Let's just hope they get their bite (and claws) back in time for the Horizon League tournament. 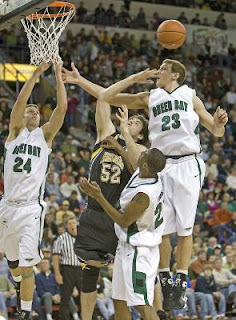 Last night's contest obviously had huge conference tournament implications (essentially, barring a complete meltdown, Green Bay is now a lock for the second seed alongside Butler- basically nothing short of a free pass into the semi-finals). As I was making my way into the Arena, I yelled out, "Go Panthers!!", and a passing Green Bay fan shot a menacing glance at me and snapped "You b&*&^". But alas, every team has their share of "fans" like this. Indeed the in-state UWM-UWGB rivalry continues to heat up...

The raucous sellout crowd of 7,980 fans made for a lively night. In fact, while the game on the floor was chock full of great college basketball, the Green Bay student section seemed more concerned with the back-and-forth between them and a loud chanting (and standing) contingent of about 25 UWM fans. (btw- great job reppin' UWM like that (and taking the Green Bay students out of the game quite a bit). Few teams have the luxury of an occasional "traveling student section" like we have had at Marquette, at UIC, at Loyola, and several other road games this season).

The Panther attack was fierce from the get-go, with Milwaukee quickly building a double-digit lead that lasted well into the first half. A cold spell brought the Phoenix back to within striking distance by half, with Milwaukee holding on to a 36-30 advantage.

But in the second half, things began to fall apart and eventually did. The Phoenix' fundamentals took over and Milwaukee failed to sustain the energy and intensity that had carried them since the early goings. In the closing seconds, there was time for another Deion James' miracle game-saver, but Tone Boyle's blocked runner of a 3pt attempt (though a very iffy "no call") was anticlimactic. Green Bay actually managed to miss some free throws in the final seconds, but it wouldn't matter. The damage was irreparable.

There were some exciting UWM highlights, even in the second half. James Eayrs filled it up Big Lumber style... but unfortunately, it was only good enough for "Player of the Game" nod from this obscure corner of the blogosphere. Green Bay swept the regular season series and relegated the Panthers to the second tier of Horizon contenders. 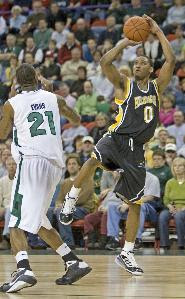 As it currently stands and looks to finish- there is Butler and Green Bay nipping at Butler's heels, and then there is Milwaukee, Wright State, and Cleveland State. Everyone else in the Horizon seems to already be at the "going through the motions" state by now. But anyone can win the conference tourney. Hopefully the remaining games on the schedule will get the Panthers ready to make a splash (upset?) come conference tournament time.

It's tough to accept, but while this team has proven their merits time and again (in the good games)- they just don't have the kind of confidence in winning that Butler and yes, even Green Bay have. As the sights get set lower (can we at least get the 3 seed?) and reality sets in, everyone must remember that this Milwaukee Panther team was projected to be in the lower half of the league. Third place in the Horizon regular season is no major feat, but it is better than expected and another step in the right direction.

UWM travels to Cleveland to take on the CSU Vikings this coming Thursday night. Unless you are the really adventurous type or are traveling with the team, you will likely be watching the game from home like myself. As always Time Warner Sports Channel 32 has the broadcast. Darron Sutton and Jason Clark have the call. While losing most all of the really big games this season has been a bit of a let down, let's not give up on this team. 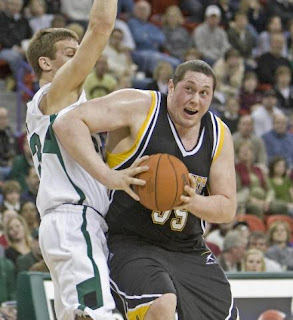 As they wrap up the season, (hopefully with a nice string of road wins), let's try to make sure we come out to the Arena in full force for the final two regular season home games versus Butler and North Dakota State (ESPN Bracketbusters game). It will be tough, but with the Panthers currently standing on last season's entire win total, things can only get better. Modest improvement? Shocking upset(s) before the final game buzzer? Nothing is written in stone. Who knows..... That's why we watch.