February 22, 2009
The Panthers ran into a very talented North Dakota State team yesterday. Lead by Saul Phillips, who, like Rob Jeter, is a former UWM and Madison assistant under Bo Ryan, the Bison (21-6) showed the Panthers what it looks like to play an entire game with near perfect execution, not relying on just talent (Ben Woodside) alone... 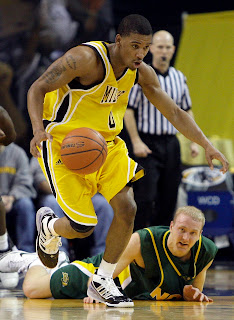 I was delayed by the weather and didn't even get to the game until half, but from what I can find in the recaps and box score it appears we played a little better in the first half- at least the game was closer (34-31). The Panthers played it close and even had the lead in the first half, but in the second half after a strong push from NDSU out of the gates, UWM never regained composure, and remained 5 or more points behind for the rest of the game. The Bison eventually walked out of the Cell with a 77-69 victory.

6 for 29. Those are the 3pt shooting numbers. You live and die with that attack. It'd be nice if the team could move the ball into the post a little more when the threes aren't falling at least a third of the time. The Panthers just kind of ran out of gas and slowly rolled into the brick wall of an experienced North Dakota State team (NDSU boasts several fifth year seniors who were on the Bison teams that took down Marquette and Wisconsin not too long ago).

The Panthers did put 5 players in double figures- Ricky Franklin (14pts), James Eayrs (14pts), Avery Smith (11pts), Tone Boyle (10pts), and Deonte Roberts (11pts) combined for the brunt of UWM's attack. But overall, the shooting (.368) wasn't there. It's been a long, long while since this team had a shooting night anywhere close to .500, right?

The Panthers' defense, which was so incredibly stingy on Wednesday of last week, was allowing uncontested layups all night as if every Panther player was on their 4th foul. Not sure where the intensity went, but it better get back in a hurry. The Horizon League Tournament is in just two short weeks, and last night's effort (while not terrible by any means) might not have beaten even Wright State. 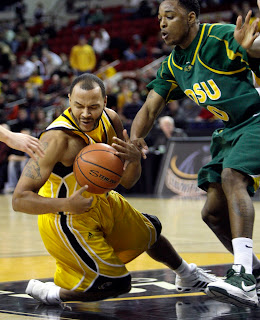 Was it a hangover, or just an over matched team? The Bison played very disciplined basketball, true, but I still think we had a better chance than what played out. The Bison took some of their average players, and just went to town on our court (Ben Woodside almost scored a triple double but had only 12 points on 4-13- it coulda got a lot worse out there!). Our attempts to press were consistently dismantled by a Bison team, that, at least last night looked better coached- it was probably that experience working for them though.

UWM just looked kinda blah out there. It was tough to watch there as the second half wound down- I've never seem the team acquiesce to losing like that- at least not at home. Hopefully the Panthers can find their stroke in the remaining Horizon League road games- Wright State (Thu. on TWC, 6pm) and Detroit (Sat. on TWC, 3pm) will be no walk in the park.
'08-'09 UWM Basketball Milwaukee Panthers NDSU North Dakota State Bison Panthers Rob Jeter Saul Phillips