March 04, 2009
Last night marked the first time the Panthers had won a post-season game since March of 2006. That seemed like a long time to wait for Panther fans who had begun to get accustomed to making the Big Dance rounds in 3 of 4 seasons in the the first 6 years of the 21st century. 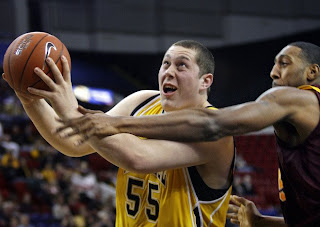 Only in the World Vision Classic season opener against Loyola Marymount has this team so clearly dominated from tip to buzzer (and ironically Loyola-Chicago the last time we played them at home). The Ramblers looked tired and dejected most of the game. They managed to mount an impressive rally to come within 7 points as time wound down, but it never got close enough. Big James, Rick, and the rest of this UWM "underachiever" squad were too much too handle.

Big James capped the big night with 20 points and 9 rebounds. Iron man Ricky Franklin dropped in 18 points in 37 minutes on yet another solid shooting performance (5-11 on FG attempts, 5-6 from the line). The Panthers were very disciplined on the offensive side getting to the line a whopping 43 times throughout the game (shot an impressive .791 on those free throws too).

All game the lead vacillated between about 15 and 24 points until Loyola's ill-timed comeback attempt there at the end. I sure hope the student section who chanted "Whitesell's fired" are wrong- because despite their lousy record, I think Loyola is definitely a team on the rise. They certainly have something going for them in the way of recruiting (they signed, 6'8" forward and former Milwaukee recruit Ben Averkamp of Germantown, WI for '09-'10).

As mentioned more than once recently (in several UWM Hoops circles), James and Ricky are starting to emerge as a very deadly tandem. Don't forget that both of these guys are Juniors. Add them and Tone, and Deonte, and Tony Meier, and Anthony Hill, and Ryan Haggerty and Riley Walker to the mix next season, and we could have a very promising season to look forward to.

The win completes a 3 game sweep of Loyola for UWM. We definitely had their number this year. Last night's game was a fitting way to avenge last year's 1st Round loss to the Ramblers at the Cell.

It was rather subdued at the Panther Mecca last night. The student section was sizable, but not particularly as rowdy as usual, and the rest of the crowd was almost non-existent (2,425 is the box listed attendance). That's alright though. Most of Milwaukee and surrounding areas forgot about the Panthers after the string of losses that followed the Butler win at home. But then again, a far greater proportion of "fair weather" UWM fans all but forgot about the Panthers after the '06-'07 season. We are still trying to win back a lot of those fans.

The reality is this team hasn't been all that great in the past two seasons. This year has had its ups- but the disappointments are more easily remembered (home Ball State loss, both losses to UWGB, Indiana road massacre, breakdowns in second half vs. virtually everyone). Heck, we'll take all the fans we can get. And being an underdog who flies under the media and popularity radar can have it's unexpected advantages, as we may yet see unfold in this tournament.

Friday at 5:00pm CST is the first grand test for a rebuilt Milwaukee Panther Basketball program. With the win last night, we have already outperformed the past two forgettable seasons. But to make that next leap- to get to the Semifinals (against an unforgiving but beatable Butler team)?

I sure hope this team is ready to do just that (and more). If we can get the kinds of games out of Rick and Big James that we've seen recently, and have Tone, Deonte, Tony, Ant, Deion, Averkamp or others step up, we should be able to pull this off.

I really believe it all comes down to shooting. In virtually every single win, you see this team shooting close to 40% or better. When we fail to shoot well, our defense is not good enough to make up for the imbalance. Like it or not, Friday night (and any potential future games in this tournament) will come down to sinks and bricks.

Turnovers are key (to force on opponents and limit our own), but we have managed to win many games while not winning the turnover battle. It is important to get to the line, true, and defense is always paramount. But if the Milwaukee Panthers put the pedal to the floor and force Wright State to keep an honest distance between all of our numerous scoring threats, we will win this game and live to fight another battle. Based on past shooting inconsistency this season, that is a huge "if".

UWM advances to the second round of the Horizon League Tourney, which will be played (along with the 3rd round) at Butler's Hinkle Fieldhouse in Indianapolis. This will not be easy, but this is all we have left. Have we beaten every team in the Horizon League? All but Green Bay.

And anyone who saw the games in Milwaukee and or Green Bay knows that we have pmck's number- we just have to apply those finishing touches. Butler has exposed its weaknesses. Wright State is no different than the Raider team we laid the final smackdown to here in Milwaukee before they started their amazing resurgence. It'd sure be nice to get another crack at all three.
'08-'09 Milwaukee Basketball '08-'09 UWM Basketball Butler Horizon League Tournament James Earys Milwaukee Panthers Ricky Franklin Tone Boyle