April 22, 2009
This couldn't be more late of an announcement (this news came out several weeks ago), but it should be mentioned here that former star Green Bay Packer linebacker and former Marquette AD Assistant George Koonce has been hired to head the University of Wisconsin-Milwaukee Athletic Department. 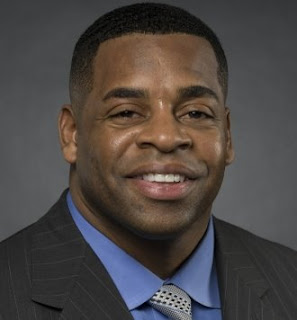 Bud Haidet took this program to unprecedented heights. He brought the Panthers into full-time Division I-A and established a proud Milwaukee Panther athletics program that routinely wins championships in several sports. The Horizon League's McCafferty trophy (for the most winningest overall Horizon League program) began to get delivered almost annually.

Fans and foes alike can thank Bud for the "UWM"/"Milwaukee Panthers" brand, and the steadily-vanishing (completely unnecessary) media tradition of prefixing "Milwaukee Panthers" with "UW-" for UWM athletic teams. After the Sweet 16 run of 2005 which ended in a loss to eventual runner-up Illinois, Bud Haidet saw an opportunity to establish a nationally recognized image and marketing brand for Milwaukee Athletics and he has largely succeeded, but it will be up to the next AD to cement that "Milwaukee Panther" brand- in the local and national medias, and in merchandising.

Bud put a lot of great pieces in place- look no further than Bruce Pearl and the sweet success he brought to UWM. Bo Ryan, one can argue, was the one who really jump started a Milwaukee Panther basketball program that had been "on the cusp" of great success a few times in the 90's, but languishing in terms of real advancement. Bud will be dearly missed, and every student, faculty, casual fan, and alumni who has experienced his massive contributions to UWM is thankful for that, whether they know it or not.

As we watch Haidet make his exit into well-deserved retirement, we can be excited that at the same time, we have a visionary new athletic director who is poised to take Milwaukee to the next level in George Koonce. UWM has had some significant potential since the early years of this decade, that much is for sure.

But while they made leaps and bounds relative to where things were in the early 90's- the basketball program in particular still has a lot of progress to make- on and off the court (as do baseball, and soccer, and track and field, etc.- yes, but this web log is about Milwaukee Panther basketball! lol). I do believe Koonce is ready to fully capitalize on that sizable slice of recognition UWM has earned over the past 8 years, and make the very entertaining experience of being a Milwaukee Panther fan- that much better. 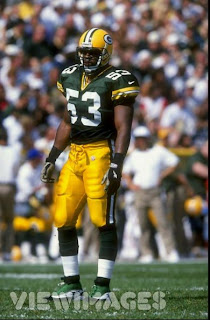 Koonce as a Packer linebacker

Koonce comes to UWM as a well-respected sports figure in this state (he was on the Super Bowl XXXI winning Green Bay team of 1996), and is known for his excellent communication skills. This gift of gab gives him an innate knack for fund raising which will be much needed in an economic climate where it might take more than an email or a mailer to get people to help keep Milwaukee Athletics moving full speed ahead. If you see George around town or around campus, say hello and welcome him to the Milwaukee Panther community he is now tasked with being a leader of.

It is refreshing to see not only an enthusiastic new athletic director who sees an even brighter future not too far ahead, but to also have a Panther basketball program that seems to be finally be building itself up for a meaningful run in '09-'10. I may have said that before last year (and the year before.. lol), but I wasn't being honest with myself- honest. Last year's team was inexperienced- next season's Panther squad will be both fully experienced and more talented- potentially much more talented (see last post and the news flash below).

**First off, what seemed like a sizable piece of the recruiting puzzle for '10-'11 has now decided to go the football scholarship route. Marquis Mason, a small forward from Madison East, has signed up to go to school in Madison and play wide receiver for Brett Bielema. I can't deny that I hope he loses some balls to Northwestern's D-backs though (I am a big NU football fan- UWM never had football and I've always liked the Wildcats more than the Badgers!).

**On a positive note, 6'8" power forward Calvin Godfrey is still committed to join the Panthers starting in 2010 and is going be coming back to Milwaukee Custer for his senior year. Calvin will now get to see lot of Panther wins at the Cell this coming season!

**(UPDATE) As of about noon today per Rivals.com, Nafis Ricks has reportedly committed to Missouri State University. Looks like the point guard spot may see a lot more of Ricky Franklin and Deonte Roberts. The Milwaukee staff was very high on Ricks and it looked like he may have been coming to UWM, but apparently MSU looked like a better fit for him. It's too bad to lose out to a school that may very well be looking up to UWM next year, but we all wish Nafis the best. Things almost always happen for a reason, so maybe the boost of motivation to prove themselves given to the guys who may have been looking at less floor time had Ricks committed (Roberts, McCallum, Boga, Walker, etc.) will be more than enough to make up for this unfortunate turn of events. With or without this recruit- this year's team was going to be a good one. It will be interesting to see who if anyone the coaches have been recruiting (and may now offer) as Plan B to fill out the '09-'10 recruiting class.

There may be a big announcement on the horizon about a much-heralded junior college recruit who could fill in the much-needed role of "true" point guard for the Panthers. Nafis Ricks, a 6'2" point guard from Philadelphia, PA has offers from Milwaukee, Missouri State, Georgia State, and North Texas. He visited the UWM campus late last March, and is likely to decide on his college destination in the next few weeks. He may just decide to be a part of what figures to be UWM's resurgence in the coming years- he would certainly fit in nicely with the current group of shooters and skilled players we have. The talk is that Nafis is one helluva a ball handler and passer- the kind of PG that creates at will.

**Everyone from last year still eligible is returning (that includes 80% of our scoring) except Kaylan Anderson and Zac Holt who are graduating early. And as a hopeful reminder- the Panthers are also getting ready to welcome Ja'Rob McCallum and Lonnie Boga- two dynamic guards who could make a Tony Meier-like transition into D-I. Lonnie and Ja'Rob are strong, tough-nosed, and very polished in their respective skill sets; they are not afraid of the bigger, better competition (they both come from "power", respected high school conferences). In any case- it sure will be fun to see how next season unfolds. Maybe we can get that Marquette monkey off our back for once?* It's not out of the realm of possibility... 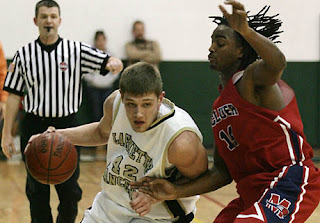 Ja'Rob McCallum drives to the basket