Evan Richard, a 6'2" SG of Cuba City High School in southwestern Wisconsin who put up 50 points against Brookfield Academy at the Wisconsin Basketball Yearbook, will join the Milwaukee Panthers next season. The Panthers received the commitment from Richard via telephone on Tuesday.

Richard said after his unofficial visit to the UWM campus, ""I really liked the coaching staff and felt comfortable, so yesterday I called and committed." Evan is ranked 16th among Wisconsin high school basketball prospects for the class of 2010. 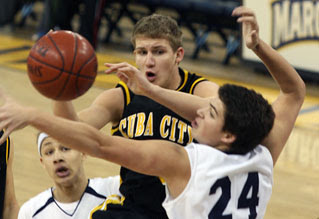 This will quell some of that criticism, but the reality is that good players are good players- no matter where they come from. Does anyone care that James Eayrs, Tony Meier, and Deonte Roberts are not from Wisconsin?

More can be found on Evan Richard here.