With games against Wisconsin, Marquette, North Dakota State, Bowling Green, Miami (OH), Western Kentucky (and possibly some other, bigger GIANTS in the pre-season NIT), and obviously Horizon conference battles against Butler, Wright State, and Cleveland State- this slate will be no walk in the park! 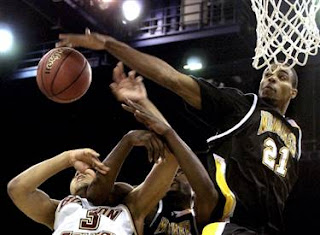 Get your season tickets now by calling 414-229-5886 or stopping by the Milwaukee Panthers Ticket Office (inside the Klotsche Center just off Downer Ave. on campus).

I know I'm excited. With the respectable record of 17-14 last season against some tough competition (and much less D-I experience), and a stellar returning cast along with JUCO transfer Michael Tyler, incoming freshman backcourt newcomers Ja'Rob McCallum and Lonnie Boga, and redshirt freshmen Ryan Haggerty and Riley Walker.... this could be a season to remember.

Achieving heights again like that shown in the photo above may seem a bit lofty for any school classified as a "mid-major". But remember pre-season national Top 5 favorite Butler comes from right in our own backyard- and 2005 wasn't all that long ago.. Let's hope the wins come early and often... and that the team can do at little better on the road this time around.... (the Panthers were an ugly 3-10 in true road contests last year). 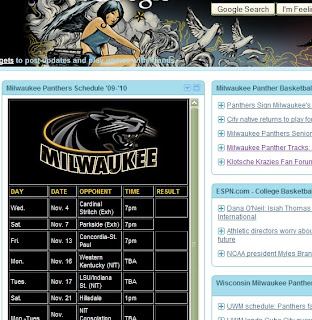 While two regular season matches in November against D-II world beaters Hillsdale (MI) and Concordia-St. Paul (MN) have some Milwaukee fans scratching their heads, remember that it doesn't hurt to gain confidence by taking a couple of games against lesser competition early in the season to let the team mesh and gain confidence. That being said- it will be a brief time to "mesh" riddled with high-stakes matches directly out of the gates.

The Panthers hands will be full beginning with the NIT Tipoff (we play Western Kentucky in the 1st Round in Baton Rougue, LA) which figures to be a brutal trial by fire. Every UWM fan should know fairly early on how "for real" this year's Panthers really are...