October 16, 2009
Meant as no disrespect to James Eayrs, Tone Boyle, Norris Cole, Andy Polka, Rahmon Fletcher, Shelvin Mack, and some other Horizon League players who could have easily made this list (and may very well make the list that actually means something- the final, real '09-'10 Horizon League 1st Team list), but these are my picks. 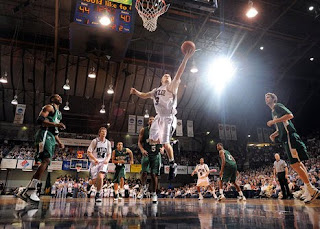 For instance, Shelvin Mack may be 1st team quality, but with Hayward and Howard gobbling up so many buckets, I don't think he will be as big a contributor as say.. Xavier Keeling likely will be for Detroit.

In keeping with a growing trend of increased intraconference competition year over year, I think that the Horizon is absolutely stacked this year. No joke. Some of the teams that I feel won't be top 5 may very well end up challenging in the Horizon League Tourney (or for the regular season title).

You just never know what can happen until the games begin and a living spreadsheet of records and stats and analysis thereof become, for a time, the "topic du jour" (the topic- tous les jours!) for millions of college basketball fans worldwide. 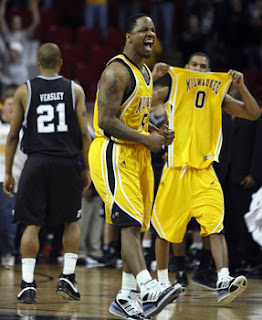 But anyhoo (Ya, thaht's rilly how wee tahlk dohn heere en Wihskahhnsin! lol), it should be quite the trip watching this upcoming Horizon League season unfold.

To any reader of this blog who is a fan of other Horizon teams or other college programs- good luck with this season and thanks for stopping by.

I tend to get pretty one-sided/one-dimensional because I am such a homer of a UWM fan, but(!), if you would take the time to enlighten me on some of the strengths/style/challenges your team is looking at this season, I would be more than appreciative to learn the information and integrate it in future posts about Panther games vs. your team.

Likewise, I am happy to provide other Horizon League bloggers/writers with basic (publicly available) information about the team and maybe what your fans can expect when they see us on the court at your place. Anything I (and some of you) can do to generate just a little more interest in the Horizon League is a very, very good thing for the future.


Call it "facetious" or an uneducated guess.... But, I really think the standings and the top-flight player makeup will fall somewhat along these lines. We shall see. It certainly wouldn't disappoint me or anyone else if Tony Meier or James Eayrs or Tone Boyle replaced Ricky in my list (or if Milwaukee gets two 1st-teamers).

Damn, we've got talent. How's that? Milwaukee's got talent. Maybe even enough to claim the HL title, or equally awesome- beat Butler or whoever else will stand in the way of winning the ever-unpredictable Horizon League Tourney. With cautious optimism... it is starting to feel like a good time to be a UWM fan.
'09-'0 Milwaukee Basketball Milwaukee Basketball Panthers Ricky Franklin Rob Jeter UWM