November 24, 2009
For the second day in a row, your Milwaukee Panthers played some pretty damn inspired basketball and came away with a convincing win- this time over the Colgate Raiders of the Patriot League. 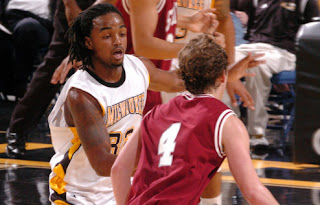 Behind stellar play from the two senior titans Ricky Franklin (19pts, 4ast, 4rbs) and James Eayrs (15pts, 10rbs), the Panthers (4-2) were able to overcome a sub-par first half (trailed 26-23 after 20 minutes), and drown out the Raiders with a barrage of 3-pointers and unusually stingy defense (hopefully this will become "usual").

But the talk of the game was the eye-popping performance of Lonnie Boga (not to mention Ja'Rob McCallum (5pts, 2ast, 2rbs, 2stl)). Newcomer Boga tallied a career-high 17 points to go along with 6 hard-earned boards and shot 4-5 from ling distance. Boga's triples seemed to come at the most opportune moments for the Panthers, who struggled to separate from Colgate until about a quarter of the way through the second half.

Every game solidifies the notion that we are going to get a lot more production out of these incoming freshman than previously thought. With Tone Boyle's status still in doubt, the added depth to the guard position will be invaluable down the stretch- esp. as minutes begin to wear on Ricky, Jerard, and Deonte.

It was refreshing to see the Panthers play so well on consecutive days. We posted only 8 turnovers (after turning it over more than 20 times last night!) and continued what now may be a "trend" of hot shooting from the field (23-50 (.460)) and specifically from beyond the arc (10-22 (.450)).

Who knows? I suggested that we start a streeeeeeeeeak to, at the very least enter the Marquette game (first (well 2nd considering we played WKU) big challenge of the season) with a respectable record and a little bit of credibility. So far, so good- but there is obviously a long way (4 games more) to go. One game at a time- that is the cliche but oh-so-true motto of winning teams, am I right?

Milwaukee visits Bowling Green this coming Saturday in a game that could either stunt or further bolster this meshing team's confidence before the home stand against UIC and Loyola. Tune in to WISN 1130 and Bill Johnson's ever-excellent (and always hilarious) coverage of the Panthers as they battle the Falcons to keep this streak alive. It's going to be a fight to the end (of the season)- and this figures to be a drawn out sparring brawl of which you won't want to miss a single round!