Sketchy Win Over Stritch in the Books, Rangers Coming to Town..

November 06, 2009
The Panthers didn't exactly bring down the house at the Cell Wednesday night with their 40 minute display of what was supposed to be D-I college hoops entertainment. The Panthers scraped by their first exhibition opponent 74-72, and sadly, were playing from behind most of the game. That isn't to say there weren't some highlights and things to be exited about- heck we won the game right?!, but..

You have to give the Cardinal Stritch Wolves credit. The apparently unstoppable Kody Braddux nailed 5 three point goals en route to a 28 point performance and the Wolve's Brandon D'Amico posted up 18pts on our supposedly "revamped" defense. Holes in perimeter D and an almost equally porous post raise question marks that noone wants to see this close to the regular season. 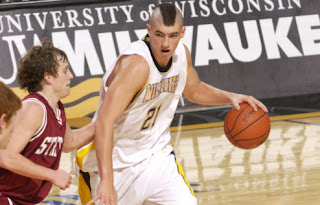 Tony Meier looks to raise the bar for the Panthers this season- this is just the first step. Shaky? But steady, first step.

Much of the discombobulation had to do with the fact that two of our best players- Ricky Franklin (ankle) and Tone Boyle (back) were out with injuries, and Tony Meier was used sparingly- though these are exhibition games and we do know what we have in guys like James and Tony and Ricky and Tone.

This is the time to find out what we have in some other guys who seem primed for big or at least significant minutes: Deonte, Ant, Tyler, Boga, McCallum, Ajami, Averkamp, Haggerty, Walker, etc. And by the way, where was Burliegh Porte at this game?

I hope we can utilize his unique game as we were able to at key times last year- he's no offensive force, but his role as a defensive post specialist which can often come in handy in close games.

Jason Averkamp (11pts) and Deonte Roberts (7pts) had very solid games, and Big James scored 20 and pulled down 10 boards. Souter, Ajami, and Boga were both out of control and completely in the zone at varying times.

Tyler seemed to be non-existent (as a defensive or scoring factor) for the most part- but his presence is formidable. I'm sure once he starts to feel comfortable at this level, we will see some highlight-worthy athletic plays out of him (and probably some distance shooting- he shot almost .400 from the 3 at Pratt last year). 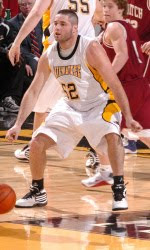 Jason Averkamp will be heavily relied upon this season for his senior leadership and wealth of Horizon League and D-I experience.

McCallum didn't get much floor time, but looked comfortable- at least on D and seems that he is poised to play at a high level in this league. Haggerty and Walker too had some fine moments.. but overall... The offense (and defense at times) looked sloppy and we turned it over 22 times!

It's a must that this team finds out how to play at a very high level consistently, well before say- Western Kentucky and the Preseason NIT!

I am not saying that I am overly concerned.. but if we play like this again tomorrow vs. Parkside (Rick is likely out again- minor injuries reportedly, but as a precaution, and Tone is out again too*), I think I will be biting my nails on whether our Horizon-contending chances are as serious as many have hoped.

Parkside vs. Milwaukee- down at the Cell at 7:00pm. It could be a pretty good show if this talented bunch wants to make it so.

This is (finally) the "rebuilt" future- we gotta seize the moment and never turn back.


*Word on the fan chatter circuit is that Boyle may take a medical redshirt due to his back issues and just shut it down with hopes to help lead this team next year. I was sad to hear this development but I have full confidence things will work out for both Tone and the program this year and next regardless of what happens. It sure would be nice to have him healthy this season, though.

**(EDIT: 11/07/10:38am) One last very important thing that I just found out from uwmpanthers.com: Ricky Franklin has been officially cleared by the NCAA to play this, his final season of eligibility for Milwaukee. Whether or not Rick plays at all tonight (he probably shouldn't if there is any lingering injuries), this is huge news. The Panthers now at least have one of their major leaders returning for this (what should be an incredibly tough yet exciting) '09-'10 campaign.
'09-'10 UWM Basketball '09-'11 Panthers Cardinal Stritch James Eayrs Jason Averkamp Milwaukee Basketball Ricky Franklin Rob Jeter Tone Boyle