December 24, 2009
These Milwaukee Panthers haven't thrown in the towel just yet. Although last Wednesday resulted in yet another loss for the Panthers (8-5, 1-1) at the hands of UW-Madison, the positives that came out of this came were numerous and give very realistic cause for optimism as the Horizon League season slate lies just a few days ahead. UWM battled the Badgers ferociously for the better part of the first 3/4ths of this game (the lead changed nearly 10 times in the first half!- not something that the Panthers have been used to when playing Bo Ryan's Wisconsin Badgers in the past).

The Boga-McCallum tandem was not as effective as they had been in the past few games, and Big Lumber continued his declining impact (which we hope is just a slump- hopefully not a sign of a larger injury or something), but even despite the final score, the Panthers showed some obvious improvement.

All of the stats were respectable- FG % (.420), 3pt % (.400), rebounds and assists were in line..... and just 7 turnovers! So how did we lose? I guess it's just Bo Ryan's doggoned will to win. He may allow lesser opponents to hang around for a while, but Wisconsin always puts down the clamps when it counts (ie. the final 10 minutes of the game).

Pretty Ricky Franklin posted 13 points, 6 rebounds, and 6 assists, and Jeard Ajami was a perfect 2-2 from three point. But it was the monster effort by a maturing Anthony Hill (12 big paint points on 6-6 shooting) that stole the show. Ant only grabbed 2 rebounds, but his offensive presence that has been nearly non-existent until these past 4-5 games (only flashes here and there), is a very welcomed development. 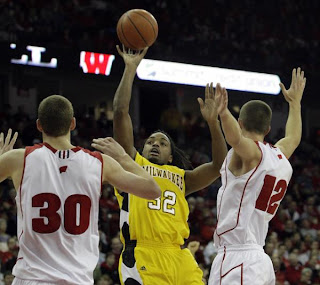 And so it always seems to go with Rob Jeter's UWM teams... In each of his 5 seasons in Milwaukee, his Panther squads never seem to get off to that hot of a start, but team chemistry and skill always mesh and Milwaukee starts playing their best basketball in December and January- usually continuing the steady improvement until the end of the season.

Tone Boyle's injury at the end of last year hampered our efforts to get to the HL Semifinals- with a healthy Tone, I've no doubt we would have beaten Wright State and gotten to that Semifinal game.

And so goes the non-conference season. Milwaukee didn't exactly break through their current boundaries of mediocrity, but a non-con record of 7-4 (likely to be 8-4 if we can beat SIUE), is nothing to be that concerned about. We are nowhere near Butler yet (or likely even Wright State or Detroit or Loyola).

And that is fine. The key word is "yet". It's a difficult thing to stay patient when waiting for things (like James Eayrs' lackluster play lately and Tony Meier's lackluster play all season.. and the fate of Tone Boyle this season) to improve. 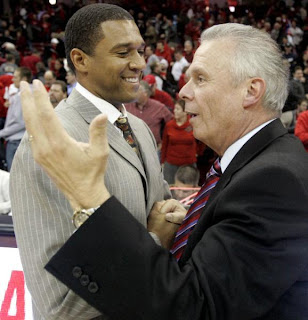 The Panthers next contest comes on the road against Valparaiso on New Year's Eve at 7pm CST. Coming just before the Butler game at Hinkle, this may be the same kind of "trap" Milwaukee experienced last year when routed by the Crusaders (ironically after an incredibly hot start by UWM). One win at a time though... Noone expected us to beat Wisconsin (except maybe me after a few beers) and... we didn't.

But Valpo should go down to a Panther team that played the Badgers to a 10 point loss. This game will be an interesting barometer... How far have we come? How far can we yet go? Those are the questions that keep us watching.....