Left Out in the Cold: Despite Final Score, Panthers Battle Marquette Tough (but not Tough Enough)

December 11, 2009
It's hard to give credit to this 6-4 (1-1) Milwaukee Panthers team when so many of us fans feel pretty down about the season, but if you were one of the few people to brave the overstated winter advisory and make it to the BC last Tuesday night, you have to admit- for about 30 minutes (longer than any of the previous 2 recent crosstown battles), that game was within reach! 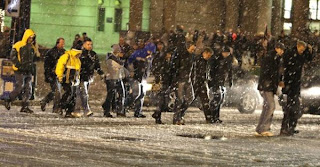 We played pretty tough defense, and limiting a Marquette team that averages 77.9 ppg to just 71, in addition to being within about 10-12 points of this surprising MU team, is something to be at least somewhat appreciative of (or less pissed off about).

But DJO, Lazar Hayward, and the rest of Buzz Williams cast o' ballers did us in. Make no mistake- this Marquette team may be undersized and inexperience for their league (though they will likely still be top 6-7), but they are one heck of a quick and sharpshooting team (it was hard to ignore they shot .522 to our .413).

For much of the game, we battled "somewhat inspired" in a sort of back and forth with MU, but it seemed more like the Golden Eagles were screwing up and giving us freebie opportunities (many of which we squandered) than any kind of great basketball playing on our part. In the end you Milwaukee Panthers suffered another defeat at the hands of MU- this time, 71-51 (last year was 100-80- hey at least we are lowering the score!).

Many things have gotten kinda funky in this early season. I would like to think it's just the "doldrums" of December or something, but it seems like there is some underlying issue that the team needs to get past and/or resolve- in a hurry. 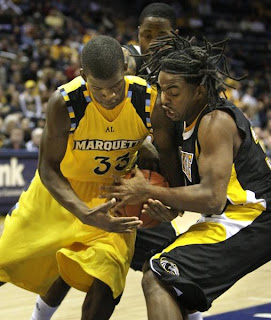 The only thing I can think of is the fact that we don't seem to have the fire that we've had in the past (esp. when this Milwaukee program was running the show in the Horizon).

Jeter mentioned that he critized the team for a lack of intensity after the Hillsdale game- and then we soundly beat Texas State (more importantly, our best payers had great games- heck Big James was 6-7 from three!! (he also had a D-I career-high 28pts)). 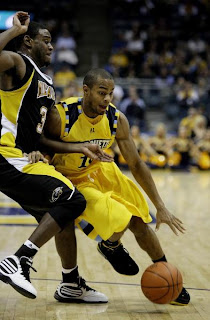 But the way things seem now... that is like ancient history. Noone seems to be able to find their shot. And the Panthers who have shot well (Lonnie Boga is shooting .538 and Deonte, Ricky, Tony, and Patrick Souter are all shooting about 45%) haven't gotten enough good or timely shots to pour it on the scoreboard like we have needed in our 4 losses.

It's an overstatement to say that right now is high tide for another winning streak or at least a big upset and some big wins in the next couple of weeks. This team's best win comes over Bowling Green (4-5) who's best win in turn is over the "fairly unintimidating" Savannah State Tigers (4-5)).

The season is far from over- just like individual games are not won in 1 or 2 short runs, this season will not be lost on a soggy late November-early December performance. It is definately a healthy and productive thing to be critical right now- I've no doubt the coaches are putting the screws to the players about their overall attitude toward this season. They don't want to settle for this any more than you or I.

But unlike us- they (and this talented Panther basketball team) have the power to turn it around. Let's give them our support and trust that they will right this ship in these next 20 games. 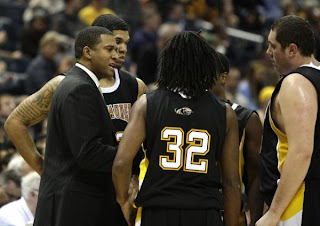 t's been a frustrating start considering some lofty early-season expectations by some of us optimists, but it is hardly time to be looking for the lifeboats.

North Dakota State- tomorrow (-er, today depending on when you read this). 7pm CST. WISN 1130- tune in if you can. It's one in the line of our non-con end game: NDSU, Wisconsin, Miami (OH).

Of course we have the Bracketbuster at home later in the season as well- but these next three will determine whether that game will be against a good opponent (ESPN seems to try and match up the best (or the hottest at the time) -"Mid-Major" teams and put them on TV).

If we can't start winning at least 2 of 3 down this stretch, we'll be middle of the pack in Horizon at best and get matched up with Colgate again in the Brackbuster. Lol. But this is no time for laughing- Colgate almost beat us.

This ship will sail strong- however- only a renewed approach against opponents that bars no holds and takes no prisoners will determine whether that it arrives at a desirable (read- postseason) destination.

Even when it looks bad out there- remember who we've got. This is hardly the end folks.