Streak On: Panthers Brick Together an Ugly Win Over UIC, 57-52

December 04, 2009
It was an uglier performance than the Hillsdale contest but once again Rob Jeter's Milwaukee Panther basketball squad found a way to win. This time UIC was the unfortunate victim- particularly unfortunate because it is nearly impossible to lose when your opponent shoots .292 (19-65) from the field (this also included an even more dismal .154 (4-26) from beyond the arc). 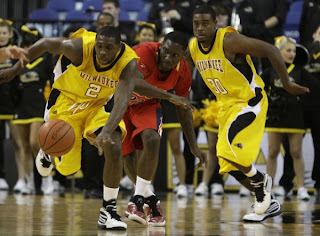 Milwaukee had the intensity going, and that (on the defensive end and on the offensive boards) is what kept UIC out of the win column in this one. But as mentioned above- our shooting was beyond the pale. Beyond woeful. It was beyond anything any of us Panther fans should have to suffer through again this season.
The crowd (with an impressive conference-opener student section) was painfully subdued for much of the game, simply because- there was not a whole lot to cheer about. Many gasps, groans, and expletives could be heard as brick after brick fell just short of (and many times way, way off) the hoop.
It looked like something out of the Twilight Zone for a while there and people started to look to the Panther fan who made a 3pt basket at halftime to suit up and give it a try- he could not have done any worse than most of our guys were doing. It was a terrible, horrible shooting display- one I hope we never see again. 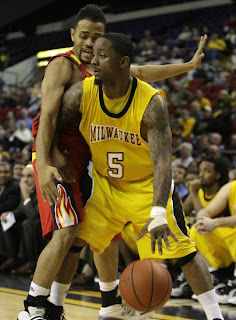 James Eayrs must have been distracted by his recent Horizon League Athlete of the Week honor as he couldn't seem to hit the broad side of a barn from tip to buzzer. Eayrs shot 2-14 from the field which included a 0-7 "O-fer" from 3pt range- not your typical stat line for the Big Lumberjack from Roseville, MN.
There were some highlights to make the game semi-entertaining. Ricky Franklin once again took charge when the chips were down scoring 14 crucial points on 5-11 shooting while collecting 5 rebounds. Deonte Roberts (6pts, 8rbs, 4ast, 2stl) had the most complete game. 'Te continues to fill the big shoes he stepped into as a heralded guard recruit in '06-'07.
Deonte has smoothed out nearly all of his ball control issues, and seems much more poised slashing to the hoop and his struggles at the free throw line seem to be mostly behind him. This could be the season that Deonte really breaks through and starts racking up assists, boards, and fast break points (not to mention the probability that he will perfect his preying mantis-like defense). 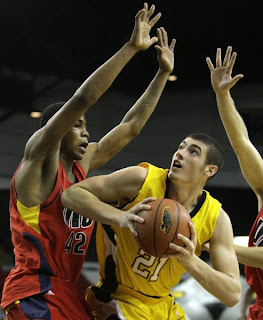 An equally positive development in the game last night was that of Tony Meier's resurgence. Tony tallied 14 points, 7rbs, and had only a single(!) foul on the game. This was his best performance in weeks- if not on the season. We will have to get more games like this out of Mega Meier if we are ever to realistically think about contending for the League (and for upsets in any of the very challenging non-con games that remain against MU, UW, NDSU, etc.).
All this being said (the negative- the positives to take away), the most impressive thing is that we managed to win a game in which we played worse than our opponent and shot less than 30%. That almost never happens in college basketball. But win we did- and once the shooting improves, we should be able to put the screws to teams with relative ease. These Panthers haven't peaked yet, but they know how to win games in more than one way (scoring, defense, foul shots, depth, etc.).

Once those shots start falling again.... look out Horizon League. Look out Loyola.

Be there- or miss what could be a continued streak into our best start since that unforgettable '04-'05 Sweet 16 run season. These Panthers haven't proven much. Despite the 6 wins (all wins were against some pretty bad teams), we've got a lot of work to do to prove we can battle (and win) against the best. It may start to come together this Saturday night downtown at the Cell. Come out and support your hometown/university basketball team. They might give you a reason to keep coming back.