January 12, 2010
To my dedicated audience of a dozen or so- I apologize for failing to report on the last 4 games until now. My computer completely died for the last time out of the blue, and I can't really write at my place of work- even over lunch. But back we are, to diligently report the subjective (and some objective) observations of each Panther game, each season. 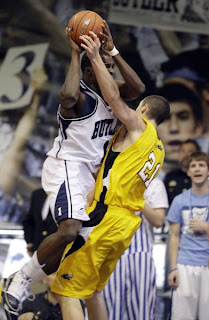 Because the Valpo, Butler, and SIUE games are so far in the past, I will just briefly recount the main events: the Indiana trip was a lot more lively (-read competitive) than last year, though the results remained the same (0-2).

First, we completely fumbled away the game in Valpo on New Years Eve night when, up by 1 pt with just over 3 seconds left (after holding the lead most of the game), James Eayrs made a very boneheaded (football) pass to a Valpo player on an inbound. That player (Brandon McPherson) proceeded to go straight to the hoop and lay in the winning bucket- dashing the Panthers hopes of a 2-1 start to league play.
We played tough on defense (for most of the game) and we threw them some counter punches over the course of the game with our perimeter firepower- Ja'Rob McCallum showed once again that freshman can fill it up just like anyone else- he scored 20pts on 6-13 from 3pt. Of course it wasn't enough due to that last minute Panther error (Lazar Hayward is crying somewhere) and things would only get tougher.. 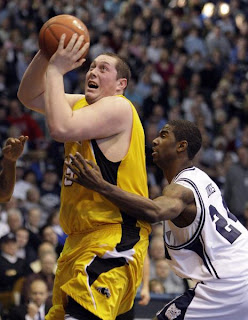 Next in line was the fabled and ever-imposing Hinkle Fieldhouse match against Butler- one of the nation's best college teams these days. We played Butler pretty tough, but ultimately got worn down. Anthony Hill had a great game scoring 18 points on 7-10 from the field.

Riding the usual stellar play of Howard, Mack, and Gordon Butler proved too much for a Panther team that hasn't played bad at all- but that hasn't yet gotten (or proven) that champion-of-champions killer instinct.
But if any positives can come from 2 road losses....... the play was clearly superior than that of say, our play against Loyola or Indiana St.- or Hillsdale for that matter. 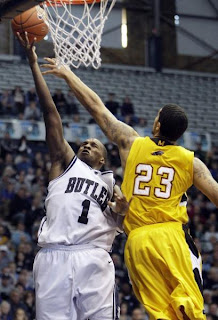 And of course this all makes the Butler game at the Cell that much more exciting.... can we pull off another upset of a "ranked" team this year too? Remains to be seen. Though I think we'd all agree our expectations should be set a little higher than that with the talent and ingrained "System" we now have.

Southern Illinois-Edwardsville was pretty much the blowout many Panther fans hoped for. We only won by ten (83-73), but the Panthers had no trouble with SIEU. Franklin scored 20, McCallum scored 19, but most noteworthy of all- Jason Averkamp had a field night, recording a double-double (18pts, 11rbs) as the Panthers picked up a much needed road victory to keep the ship afloat.

I think it is very evident in the past 4-5 games (probably starting with the Wisconsin game), that this team is finally figuring out the puzzle and really putting their practice (coaching) on the court.
This is thanks in no small part to the freshman phenoms (JaRob, Lonnie, and Patrick), but all have had a hand. Franklin continued to carry the team as other Panther goto players like Meiers and Eayrs went noticeably absent.... until(!)