February 16, 2010
So your Milwaukee Panthers bussed on over into Dayton, Ohio to face the ever-challenging Wright State Raiders. According to the typical script we've seen time and again this season, the team fought hard, and were clearly within striking distance of the lead nearly all game. But then the wheels began to loosen, the engine began to sputter, crash, burn, and we dropped yet another winnable (big) road game, 68-63. 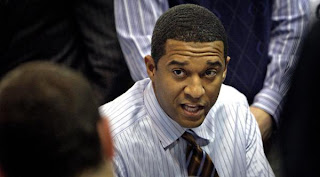 Things weren't so bad though. James Eayrs tallied a 26pts, 6rbs, and 3ast night and freshman (do we still need a reminder?) Ja'Rob McCallum added 17 in the losing effort. As mentioned before, (it's almost getting annoying to keep reminding myself of this) we are in nearly every single one of these games! Outside of our game at Butler, and the second half against Detroit at home, we have been within 3-4 possessions (max) of pulling momentum our way and closing out these games for those (seemingly elusive) "W"s.

The Panthers took to the road again to face off against the same Detroit Mercy Titans team that decimated us on our home court in front of one of our biggest crowds of the season (beating UWGB by 20 points definitely gave a boost- if only momentarily, to our fickle casual fan base). After that beating many of the patrons who left the building that day, haven't come back- yet.

We played very impressive in our rematch game against Detroit at the visiting team-friendly, Calihan Hall. The Panthers were on nearly all night as the final field goal percentage (44%) clearly showed. Detroit was able stay with the Panthers until eventually our three point barrage became too much (Milwaukee shot 12-32 for 37.5% from 3-point range), and UWM handily dispatched UDM on their home floor, 71-60.

Big Lumber continued his climb back to the top of the mountain with 15 points on 5 trey-bombs. Ricky Franklin was utility man as always dishing out 4 assists, and grabbing 3 steals while leading all scorers with 16. Better news yet, Tony Meier came out of hiding to post 12 points and 6 rebounds in his 19 minutes of work (my, how things might be different if Tony had played that well all year and we had Tone for this campaign!). 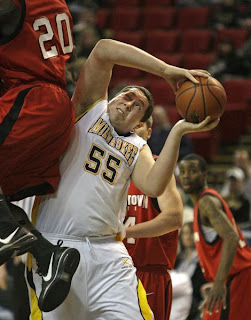 The Panthers next returned home to face a Youngstown State team that seems to be doing everything they can to challenge UIC for last place. In short, a loss to the 'Guins would have been more damning than any of our (many) previous lackluster showings this year. And lose we almost did! If not for a waved-off last-second 3 drained by YSU's Deandre Hall as time expired (-er thankfully "after" time expired) these Panthers- and likely any chance for a season-ending push of momentum- would have been toast.

Fortunately for the statistician's chance we still posses- Milwaukee prevailed, 64-42.
However difficult that display of basketball was to stomach, at least there were some things to be proud of- James and Ricky were the senior leaders- posting 22pts and 6rbs, and 19pts and 4ast, respectively.

There were also the omnipresent deficiencies rearing their ugly head (against the Penguins no less!). First and foremost- our porous defense needs to man-up. Period. We will get slaughtered (as we already have) by more physical teams if we continue to let offenses break through our zones and defensive positions like so many immovable straw men.

But all is well that ends well. We got the win, we'll take it and move on.

It's encouraging that Milwaukee (15-12, 7-8) now has two upcoming home games (Cleveland State on Thursday night and Niagra (ESPN not-so-aptly-titled "Bracketbusters" game) on Saturday night). Both CSU and Niagra are beatable (ie. they are not named "Butler" or "Wisconsin"), but the latter (who won 26 games last season and lost to Sienna in the last MAAC Championship) will likely pose a bigger challenge and will come on the heels of us having played 2 games in 4 days... 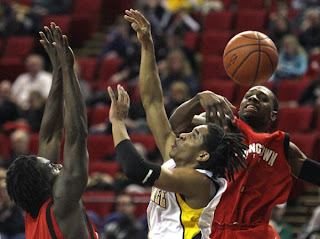 Who the heck really even knows anymore... Certainly not me! The way people are these days on the Panther fan discussion board (and myself posting articles on this fan blog as the season's fortunes rise and plummet), makes one wonder whether the entire Milwaukee Panther fan base is completely bi-polar! It has definitely been a roller-coaster of a season.

More downers than high notes, but we have not exactly performed bad enough to be termed a Horizon League "Cellar Dweller". However, unless this 2 game winning streak can extend into the Horizon League Tourney- we may wind up just that.

My cousin, who is completely new to this year's team (in fact never saw last year's team either) summed it up pretty well when he mentioned mid-way through last night's yawner, "[the Panthers] look a lot more talented than the other team (YSU), but the other team looks like they are trying way harder".

I hate to criticize this team for a lack of effort, but it's obvious that at (too many) times, we have not played as fast and as aware and as strong as our competition- at many key moments that have decided the game no less! Basketball is a game of runs, yes, but this team all-too-often disappears for so long of stretches (damaging themselves far, far more than just another team's "run"), that they essentially play themselves out of the game.

The funny thing about this season's Panthers is that, it's as if from game to game you really have no idea which team is going to show up. Will it be Ricky-take-charge, or Mad Ant Hill owning the post, or as we have seen all too awfully often, will it be polar bear ice cold shooters night? Or will it be the laissez-faire defense that has allowed so many easy buckets that should have been at the very least been contested?

This team is many things (and talented as ever!), but they are not (yet) consistent. Until they figure that out, success will be measured in Horizon League tourney wins (or hosted home games- if we can even accomplish that meager amount of success) and not by NCAA Tourney or NIT appearances...

Being an unapologetic optimist, I am banking on the minuscule off-chance that we catch a huge fire right there in early March when it really starts to count, and don't let up on the gas pedal until a net or two comes down. That sounds laughable yes, but not impossible. I refuse to get "excited" about our encouraging 2-game winning streak, but it's a start, no?

This Thursday night, Cleveland State comes to the Cell with an eye on a season series sweep. The Panthers have a chance to negate the loss in Cleveland and extend our winning streak to three games before the end game (vs. Niagra, @ Loyola, @ UIC). In college basketball, and most sports, and really in life in general- momentum is omnipotent- until it's gone. Let's hope we can keep this going...

(Milwaukee may yet climb to the upper half before it's over!)
'09-'10 Milwaukee Panthers Anthony Hill Ja'Rob McCallum James Eayrs Panthers Ricky Franklin Rob Jeter UWM