February 28, 2010
Say what you want about these Milwaukee Panthers- just never say die.

After playing literally the worst first half of the season against Loyola at the Gentile Center last Thursday, the Panthers came out a completely different team in the second half. Slowly but surely, Milwaukee chipped away at Loyola's lead. Rick and Ant combined score 41 points for the Panthers, as UWM proved too much for LU to fend off. 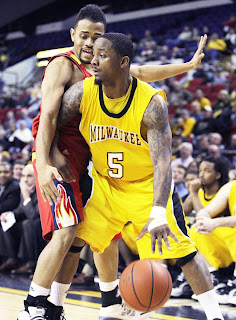 A Franklin layup with 1:53 left in the game put Milwaukee ahead for good and the Panthers went on to secure the victory 63-61 to guarantee at least a .500 conference record and a home game in the 1st Round of the Horizon League Tourney (not something we should "aspire" to, but a milestone nonetheless).

Next on the Panthers plate (which seems to be getting licked clean in recent weeks) was the UIC Flames.....

Before I give a belated half-hearted summary of the game, I must say first off, for my first time attending a Flames game, I was very impressed with the "Pavilion" - their on-campus arena. It has been tossed around in the media and even the UWM Post (UWM's student newspaper) that UWM is exploring the feasibility of moving men's basketball away from the US Cellular Arena downtown (where the Athletic Dept. reportedly pays a hefty sum just to rent the facility for 14 games) back to campus (where many, including myself (a big fan of the Cell no less)) believe it belongs.

I felt that minus a few thousand seats (the ideal on-campus Panther arena would probably only need around 6,500 seats), the Pavilion is a perfect model for a college basketball arena done right. Form the concourses with several tasty options for refreshments to the 270 degree advertising board to the beautifully clear HD color jumbo screen to the sight-lines to the upper deck to the mini-skyboxes to the overall architecture of the building (the seats were a little uncomfortable though I must admit)- it's places like the Pavilion and Green Bay's Resch Center which make the real case for Milwaukee building it's own quality arena.

That's about all I will say about that whole idea- we are probably at least 4-5 years away from any potential progress on that front, but I think it is an excellent idea and will only gain momentum if (hopefully "when") the team begins to put together some consistent success on the basketball floor. There is nothing that puts pressure on university brass to make moves than a clamoring fan base and boosters who remember how proud they were when "Panther Hoops" was a bit more synonmyous with "success" in this town.

Back to the game! The Panthers jumped out to an early 8-0 run on the backs on James Eayrs and Anthony Hill (who is gaining scary amounts of confidence with each and every step he takes in the post!). UIC went down in flames in the first 20 minutes and entered the break trailing Milwaukee by 14 points, 41-27.

But somehow the timeless Jimmy Collins willed his Flames back into the game in the second half. Robo Kreps (16pts) and Jeremy Buttell (16pts) combined to form a potent threat from beyond the arc this particular afternoon (UIC shot 9-18 from three). The Flames in this game (much like the Panthers in this season) just would not quit. Milwaukee did manage to keep a lead buffer of about 6 points for the vast majority of the second half, but when the clock got under 5:00, things began to get very shaky...

Fortunately(!), the Panthers did not wither, and in the face of pressure and an embarrassing loss to the Horizon's 9th place team and a former (and future) bitter rival, Lonnie Boga, one eye and all (Boga was poked in the eye late in the second half and almost had to leave the game) knocked down 4 critical free throws (Boga was a prefect 8-8 from the charity stripe on the day) to secure the Panthers final victory of the regular season, 78-74. In addition to Boga's cool and calm demeanor that helped bring home this "W", Ant continued his tour of destruction dropping in 20, Big Lumber tallied 19, and Rick scored 16.

When one considers we lost 5-6 (depending on which you count) extremely winnable games, and aside from those, lost two absolute "locks" on buzzer beaters (@Valpo and @Cleveland State), we are not in bad shape. Imagine if we win just 1/4 of the aforementioned heartbreakers! We are 20-11 (and likely 2nd or 3rd place).

Not bad for a team who, just a few weeks ago people had taken for dead. But alas! We are in fourth place- coincidentally where many of the pundits and statistics agencies predicted we would land entering this crazy season. My it feels good to be out of the (Horizon League) cellar now doesn't it folks?

And so Milwaukee (18-13, 10-8) sets it's sights on a rematch with UIC- this time on our home court at the Cell. Though it doesn't seem like that important of a contest to most casual fans who have still written the Panthers off for this season- the stakes could NOT BE HIGHER. It's sudden death- so if this Panther squadron loses in front of all us fans this coming Tuesday night... that's it.

For Rick, and Big Lumber, and Averkamp and the rest of the seniors- the gig is up as soon as we lose. "As soon as we lose". Let's hope we have a few more weeks of nothin' but winning. These guys definitely seem to be peaking at the perfect time.

For a team that started out the conference season 5-8, and rebounded like this- you should be proud to show your support. What stands between us and a successful Horizon League Tourney run? For now- only Jimmy Collins and the UIC Flames. We have beaten or nearly beaten (minutes from beating Butler here in Milwaukee in late January) every single enemy that stands in our way. Let's put the pedal to the medal- reach top speed- and hit cruise control, shall we?
'09-'10 Milwaukee Basketball Horizon League Tournament Milwuakee Panthers Panther Hoops Rob Jeter UWM