February 24, 2010
Once back at the Cell after the relatively disappointing road trip (the Detroit win was the only thing preventing that trip from being a total disaster), the Panthers, protracted their claws a bit, and showed impressive resilience in bouncing back to defeat the tenacious full-court pressure of Gary Waters' Cleveland State Vikings.

Milwaukee soundly beat the Vikings, 69-59 in front of a crowd of 3,000 or so who were visibly impressed by this team's ability to play damn tough when the system is working. Norris Cole, who single-handidly stole the game from the Panthers in Cleveland, went off again on this night, leading CSU with 21 hard-fought points. 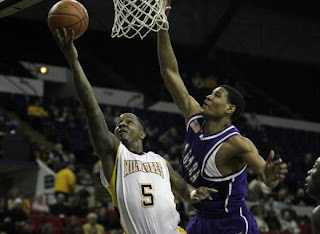 But the Panthers countered- and very effectively. While Rick had a quiety night offensively with only 8 points total, James Eayrs scored 11 and the "so fresh and so clean" (sorry non-hip-hop fans, that is an Outkast song reference) newcomers Ja'Rob McCallum and Lonnie Boga posted a dozen points apiece. The most telling stat of the night was probably the rebounding differential- we out-rebounded Cleveland State 44-27! Now that is a stat that will help you win basketball games...

Next came the home ESPN "BracketBusters" match-up, between two teams who, at this point in the season don't appear destined to bust anyone's bracket come March Madness. The Panthers definitely still have a chance to get hot during the Horizon League Tourney (they've also had a lot of chances to get hot- this season.... to no avail)- but as far as I know the HL Tourney has never been won by a team who was not a #1 or #2 seed (and so thus would have to win 4 instead of just 2 games in a row). But possibilities abound and are what life is made of..

Interesting factoid: Does anyone know that when UW-Madison made it's first Final Four run in the modern era in 2000 (the Badgers defeated Washington State, 39-34 to win the third-ever NCAA Tourney in 1939, but hadn't sniffed anything more than the 2nd round until the year 2000)- the Badgers were (coincidence?) a #8 seed that had 13 regular season losses?!!

Granted, the Badgers got in and seeded as high as they did based on a solid .500 (8-8) record in a "Big"-time conference, but it just shows that not all who wind up the best when all of the dust settles have ended the regular season with a an ultra-impressive record.

But I digress- after coming back to Milwaukee, the Panthers squared off in what was (despite the final result) one of the most (if not the most) entertaining Milwaukee Panther home games of this (once-again) "enigmatic" season.

The Cell, if not packed to the gills like some big games in the days of old, sure sounded like the Cell of old and the Cell many of us used to know and love- esp. during the second half when the game was as close as college hoops battles can get. The student section traded parts of a well-known UWM chant with non-student fans in an opposite section- [Students]: "MILWAUKEE" [Non-Students]: "PANTHERS!!!". Pretty hard to recreate here in a blog post... but it was pretty loud- and pretty damn cool.

Although Niagara possessed the lead for the majority of the game, this one was tooth and nail and never out of reach until the final 20 seconds. Case in point? We shot 54.4% from the field!! It is a downright anomaly (and shame) that we lost this game- we never lose when we shoot over 50% from the field!! At least I can't remember the last time that happened.. Kevin O'Connor (UWM's SID), anywhere?

The Panthers actually took the lead twice under the 10 minute mark in the 2nd half. But the Purple Eagles proved too much with their up-tempo run-and-gun offensive assault. UWM missed several free throws in the effort (7-12 or 58%) which severely hampered our chances to pull out the win.

There is always the sunny side- Rick tallied 22 points, 4 rebounds, and 7 assists, and Hill, Eayrs, and Boga all reached double-digit point totals. In the end though, the scrappy bunch in purple wore these Panthers down, didn't allow them a second to catch their breath, and prevailed on our home turf(!)- winning, 85-79.

Though it would have been an admirable feat to win out the regular season and enter the Horizon League Tourney riding high on the hog with a 6 game winning streak.... it just wasn't meant to be this season. And, really, it doesn't much matter. The Niagara result has no bearing on the only important thing left to pay attention to as the final Horizon League contests play out- HL Tourney seeding.

Milwaukee, currently in 6th place (one game ahead of Detroit), stands a very good chance to host a 1st Round home game at the Cell if they can hold on and defeat our lowly Chicago foes (Loyola Thurs. night and UIC Sat. afternoon) later this week and weekend. I hope Niagara was not the last time we'll see this team in Milwaukee, but if we do host a 1st Round game, I also hope that won't be our last game!

For a team that failed to make it out of the first round of the league tournament in '06-'07 and '07-'08, and lost a tough one to Wright State last season at the Nutter Center in the 2nd Round, I think any measure of success is now solely predicated on how far we can get in the Horizon League Tourney.

Pay attention Panther fans.... There is still at least 3 (hopefully 6+!!!!) games to watch. A lot could happen in the final run. If we continue to peak during this, the end of the season (which, seeing the way Ant, Haggerty, McCallum, Eayrs, Rick, Averkamp, Meier, and Boga are playing- we definitely are hitting our stride in a big way), that play can generate momentum which might propel us to a few big victories that will make this season a lot more memorable than it currently seems....