Panthers Don't Let Up Until Final Minutes in Home Win Over Miami (OH), 68-61

December 18, 2009
Your Milwaukee Panthers emerged victorious from Saturday night's contest vs. Miami (OH) at the US Cellular Arena.

Milwaukee played hard on both ends of the court nearly the entire game. Possessing a lead that ranged from about 12 to 20 throughout most of the game, UWM did seem to tire, slow down, or slip up in the final minutes allowing Miami (OH) to cut the Panthers' highest lead (19) down to just 1 point with under a minute to go. 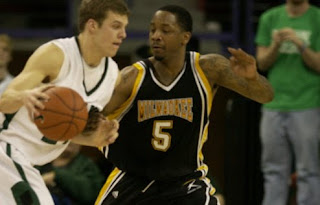 The Panthers quickly re-extended the lead and never looked back- but our "inability to run teams out of the gym" syndrome reared it's ugly head once again. I can't figure it out (it's hardly like we had the end of the bench finishing up this and other games where we slip up at the end).

Despite the fact that James Eayrs (4pts, 1-6 3pt) and Tony Meier (0pts, 0-5 3pt, 5rbs) were virtually absent, our freshman phenoms (Boga (13pts, 6rbs) and McCallum (14pts, 4-6 3pt, 3rbs)) stepped up big time (yet again) while following the steady hand of Ricky Franklin (20pts, 5rbs, 6ast, 3stl) all the way to a convincing win. McCallum alone began to drop 3's with precision (on command it seemed) during the early part of the 2nd half- and it was that run that seemed to really do in the Redhawks for the night.

It is something special to see Rick really come into his own in the same way he did late last season. If he keeps this up, and Big Lumber and Tony Meier find their touch, the Panthers could be a lot more like the team we expected to put on the floor this year.

Another positive observation to mention is that of Ant's continued (slow, but sure) improvement in the paint. Hill once again showed flashes of his (hopefully budding?) post prescence- which, more than almost anything else will be critical to any chance of escaping Madison with an upset victory (or at least keeping the score close!).

This was easily the best home performance of the season by these Panthers- let's just hope that it wasn't a flash in the pan!

Milwaukee travels to UW-Madison for a date with the Badgers Wednesday night at 8pm at the Kohl Center. Wisconsin rarely loses home games (they are 125-10 since Bo Ryan became UW's coach), and when they do it's usually against ranked BCS teams. Noone is going to give us much of a shot in this contest, but hey, maybe that will work to our advantage and allow us a bit of that "surprise attack" angle.

Some unbelievable season finals make this game even more interesting: Wisconsin beat Duke earlier this month, then Green Bay beat Wisconsin at the Resch Center, then defying all the odds, Oakland (MI) beat Green Bay- by 20 points! Just more evidence that upsets happen all the time in college basketball.....

Let's just hope the next upset comes to the Kohl Center by way of a traveling band of (very talented, but not without something to prove) hoopsters coming west from the East Side of Milwaukee, WI. The deck is heavily stacked against Jeter and the guys.... but nothing is certain- not even one of the most successful home court advantages in the country.

Tune in to the Big 10 Network for the live telecast, or tune to AM 1130 for Bill Johnson's call. Or, if you can make it- head over to Madison and watch the team in person. Trust me, they really are getting better with each game. A game like this however, will tell us in stark relief- exactly how much.