February 02, 2010
Your Milwaukee Panthers started out the brief two game home stand on a positive note last Saturday evening as they took down the same VU team that shocked us into defeat with a buzzer-beating Brandon McPherson bucket on New Year's Eve just over a month ago. 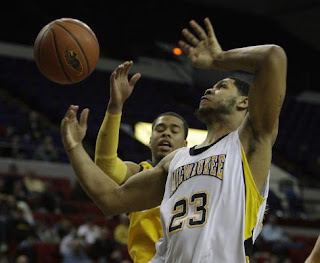 Ricky Franklin (22pts, 5rbs, 5ast) once again led the Panthers' (13-10, 5-6) attack, but Jason Averkamp stepped up big time off the bench in a career-high effort (22pts, 7rbs). Defense was obviously much more porous than we'd like, but overall we played a good game and props should be given to the coaches and the team for rebounding nicely after the frustrating end-of-game road loss against Cleveland State. 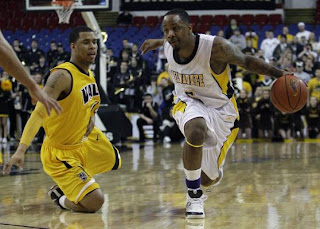 The Panthers got to the line with regularity (24-35) and converted well. Though the Crusader's Cory Johnson (21pts, 7rbs) looked as if he was personally going to spoil the Panthers night (Johnson had the look of a man on a mission all game- I only wish we would play with that intensity more often!), it wasn't in the cards for Homer Drew and company.

Though the Crusaders tied the game up with just seconds remaining, Ricky Franklin drained a contested three from what seemed like the rooftop of Turner Hall with 1.8 remaining, the crowd went nuts, and Milwaukee prevailed 85-82.

It was a solid victory and things seemed to be coming together for the unlikely but always-possible upset that every Panther fan quietly hoped for the following Saturday.... 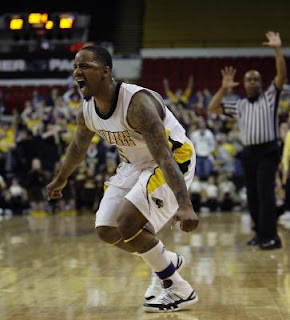 And then Butler came to town... Seeing them live, even if they didn't play their best ball, I have to say that Butler is as good as advertised. They certainly looked like they executed (esp. on offense) their playbook as if they have had it memorized since the summer of last year. Very clean and effective ball movement- the one thing that kept Milwaukee in charge most of the game was BU's woeful and uncharacteristic shooting from three point land ( 2-13 or .154!). 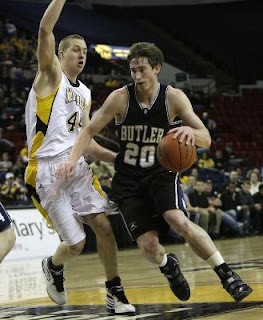 Gordon Hayward kept the NBA scouts in attendance interested, with a game-high 25 points, 6 rebounds, and 3 steals. Hayward seemed intent on making sure that BU did not suffer a repeat of the court-storm, "clockgate" upset of last year.

And so it was... In a rare night where Ricky Franklin was way off the mark (2-14 from the field.... ouch.), Milwaukee forfeited a late lead, and the "Dawgs" assumed their dominance ending any hope of a "ranked team" upset at the Cell this season...

On the positive side, Ryan Haggerty (8pts, 4rbs) took full advantage of his unexpected increase in minutes (Deonte Roberts is temporarily out with academic eligibility issues and Tony Meier is out with a minor ankle sprain he suffered against Valparaiso). Haggerty looked very comfortable and if he continues to get better, he could really come into his own and become a force in the league (a la Anthony Hill...) in the coming 3 years. 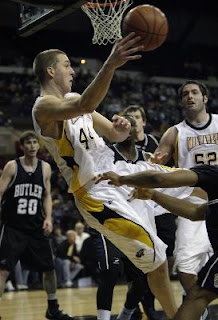 Anthony Hill (21pts, 8rbs, 3ast) made Butler's front line look silly at times (that is no sarcasm, Ant seriously manned up and gave the Butler bigs all they could handle), and James Eayrs hit a very timely 3 to add to his 9 points and two blocks with his patented "Big Lumber drop-step dart throw". On the afternoon though, the Panthers were almost as awful from long-range as their opponent (4-16).

It was a decent showing and looked (we literally lead nearly all game- Butler's biggest lead of the game? The final margin- or 7 points) like we might even pull off the upset without our point man playing his best (I got a feeling... that Rick is not going to easily forget that performance and will likely have a very fan-rubbernecking showing this Saturday...) wasn't enough to beat a Butler team that seems to eat most Horizon League teams for a light snack every few days.

We lost(?), we lost(!), we lost. I think the team feels the sting of those words more than everyone in attendance did.... the rest of the season will tell us exactly how much more. 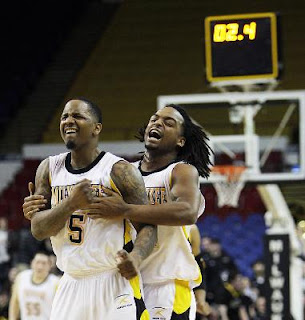 You can sugarcoat this season (or our (impressive at the HS level indeed) recruits coming in 2010-2011) all you want, but the fact remains that the majority of Panther fans are at best apathetic right now- that could change almost overnight (with a big win or winning streak or a champion-like performance in the Horizon League Tourney) as everyone who follows sports should know...

As pessimistic as most everyone has gotten about this team and this program though- we are still a mere 2 games out of 2nd place in the League. A few bad breaks by those above us, and a few unexpected road victories and we are actually very much right in the hunt for second place and the coveted #2 seed in the league tournament.

The biggest rivalry in Milwaukee Panther Hoops is coming up this Saturday night at the Resch Center in Green Bay versus the tied-for-3rd place pmck-coached UWGB Phoenix. Green Bay started out the season hot (mostly due to a very timid non-con schedule, but we here at MPT must give them credit for their dismantling of the Badgers- that was very impressive no matter who played or didn't for UW-Madison that day), but has begun to fade a bit as the conference slug-fest enters the 12th round or so... 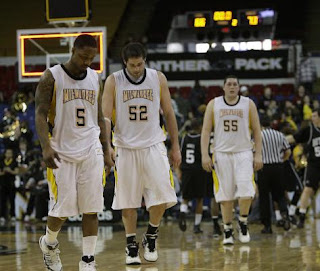 This is a game that could turn the tide- there is only so much of the '09-'10 voyage left. It's crazy we're already here, but- it's kinda now or never.

Thank heavens for the NCAA Tournament Auto-bid*. Without it, we'd have nothing to dream about. but from Youngstown to Valparaiso, Horizon League fans for teams other than Butler know, though the odds are immensely long, we all still have a chance. 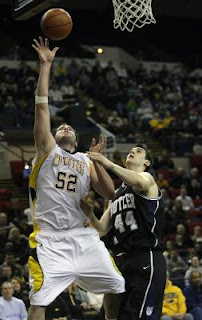 *One could say that the NIT would still be a possibility if we finish strong and lose in the HL Tourney... however with our losses to some pretty lackluster opponents (Indiana State, Loyola, Valpo, etc.), there isn't much chance of that happening.

Once "the" premier college basketball tournament in the country, the NIT has degenerated into the (coach job security) consolation prize for BCS schools who miss out on the Big Dance. Not too much hope for a Mid-Major who has few if any impressive wins (rem. "impressive win" is a relative term in D-I college basketball) under it's belt.