March 07, 2010
And so it was UWM fans, your Milwaukee Panthers performed valiantly in the final weeks of the season, and reached the Horizon League Semifinal game (something we haven't done since 2006). But the #11 team in the nation proved too much (esp. when combined with "sketchy and more than a little biased" home officiating by the Horizon League refs) for Milwaukee to overcome. 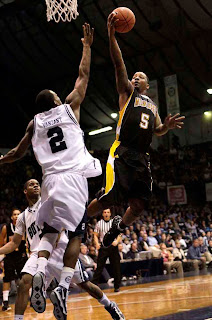 A game is never decided by the officiating alone, but just ask any (unbiased) casual fan (several other Horizon League team's fans (not BU fans of course) have already commented on the deplorable one-sidedness in the way this game was handled by our favorite men in stripes)- it wasn't just a little bit of home-cookin' for BU (in a game that is dishonestly billed as "neutral")- it was the whole spit and and kaboodle.

Even so, your Milwaukee Panthers were up by 10 points mid-way through the first half, and really seemed destined for the upset. But Butler became Butler (or remembered the cliche but respect-demanding "Butler Way") and eventually assumed leading position. A Ricky Franklin three actually cut the BU lead to a single point(!) with just 7 minutes remaining, but that was the last flash of greatness we would see in Milwaukee's performance in the Horizon this season. In the end, the Bulldogs won, 68-59.

Our free-throw shooting (11-20) certainly didn't help overcome the other factors beyond our control. Imagine- we make just 4 of those 9 FT's we miss, and we have a much more realistic chance for Rick, or Big L, or McCallum, or Boga to hit some momentous 3 pointers in the closing minute or two. Such a huge difference between being down 3-4 or being down by 9. Gotta make those foul shots Panthers...

As the tale of the tape begins to settle in, who can seriously gripe about a 20-14 (12-9) season record? How can anyone in Milwaukee- from UWM alum, students, and casual fans, to Marquette fans, to UW-Madison fans, to local talking head Matt Belling (who seems to enjoy nothing more than taking unfounded jabs at UWM when it comes to his college (sports/education) commentary), not be proud of this team? They reached the 20-win plateau, and while our resume isn't exactly enough to impress the NCAA or NIT committees for an at-large bid, I think the chances that we are at least "invited"* to the CIT or CIB is a very real possibility.

I for one sure hope to see this team battle one more time yet this season- who knows? Maybe we even get another home game at the Cell. Paramount congratulations to our outstanding seniors who have matured into incredible people and will undoubtedly go on to succeed in life just as much (or more) as they have on the hardwood. To Ricky Franklin, Jason Averkamp, James "Big Lumber" Eayrs, Burleigh Porte- THANK YOU GUYS SO MUCH!!!!

We appreciate all of the entertainment you provided for us fans and wish you the best of your future careers. You've no idea how much you mean to us fans. I hope that the "ties that bind" keep these guys around the program for a long time to come. There is a heckuva lot that the younger and incoming players can learn from these guys and all of the tribulations they went through to reach this, what seems to be the end of the road in their collegiate basketball careers.

I am very satisfied with what I saw this season, and feel that I definitely got my money's worth. Could we have done better? Are you kidding me? I think this team could have very realistically been a #2 seed in the Horizon League Tourney and faced Butler not in the Semifinal but the CHAMPIONSHIP. 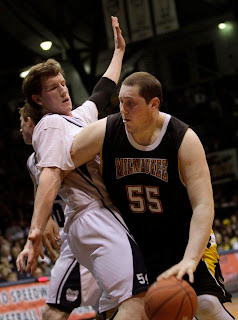 Should we be content with a League Tourney Semifinal loss and no incredibly impressive wins to speak of? Hell no. But the bar has been raised for next season. I think if you ask Lonnie Boga, Ja'Rob McCallum, Ryan Haggerty, Anthony Hill, Tone Boyle and others about next season's expectations they will tell you- NCAAs or bust. There is no reason this team and this program cannot get back.

Butler will likely be just as good if not better next season, but there is very good reason to believe we can keep up with them- Wright State, and everyone else in the Horizon, and continue to move up. Next season? We win those aforementioned games we should have won. We win 24+ games, and make it to the Horizon League Championship. What happens beyond that is anybody's guess, but another step forward- a couple more wins and a title game, seems to me to be a realistic hope for next season.

Big Lumber and Rick are not gong to be easy to replace- but don't forget that this season, we went without a certain sharp-shooting guard- Tone Boyle, who can shoot the lights out from 3. Additionally, Tony Meier may break out of the Sophomore Slump that he was mired in all of this season. Evan Richard, Kyle Kelm, and Leek Leek aren't going to be expected to make an immediate impact- but then again neither was this year's class and look how incredible they turned out!

Big Lumber is a huge loss- but fortunately we have some great post men in Ant, Hags, and 6'10" South Carolina transfer Mitchell Carter (not to mention Tony Meier once he regains that swagger he once had). The more difficult person to replace would seem to be Mr. Do-Everything- Panther Floor General Ricky Franklin. In short- we need an established point man. A great ball-handler, a leader, and someone not afraid to go inside, play bruising on both sides of the floor, and distribute the rock to our highly capable wing-men shooters and our strong men in the post.

It will be interesting to see how it all shakes out, but I am confident this is a team and a program on the rise. Not skyrocketing- and maybe even sort of slow and steady. But I am all for whatever it takes to make Milwaukee Basketball a perennially successful D-I Hoops program. Better getting all of our ducks in a row and doing it the right way, than landing a talented prima-donna, one-and-done recruit and just being known as a flash-in-the-pan (or even worse- just get pub/coverage because one guy on our team has "Sports Illustrated sex appeal"). 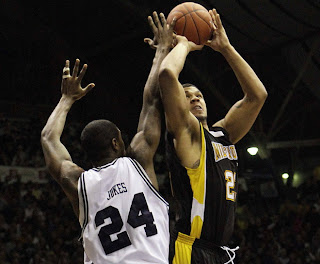 But yet again, I get ahead of myself! This season may not yet be over. It sure seems that way (and I, like a lot of you fans, am pretty bummed that this might really be "the end of the road" for '09-'10 Milwaukee Hoops). We can still hope for another chance to battle. Another chance for Big Lumber, and Rick Franklin, and Jason Averkamp to show us how incredibly far they have come. C'mon CIB/CIT- you have a team here who doesn't need your vote, but if given the chance- will give a lot more merit to your tournament than several of the other teams you are considering. These Panthers never quit, never die, and always put on a great show. Whether yet again this season or looking forward to next- as always, GO PANTHERS!!!!

*there is a chance that we get invited to one of these tourney's but decline the invitation as we would have to foot the bill for our participation- not something that UWM's AD can easily afford.
'09-'10 Milwaukee Basketball Burleigh Porte Butler Bulldogs Horizon League Tournament James Earys Jason Averkamp Panther Hoops Ricky Franklin Rob Jeter