April 12, 2010
We can all stop crossing our fingers in hopes that Jeter and staff will find an experienced point man to replace the huge void left by Ricky Franklin after this season. We don't just have an experienced point guard now- we have one that turned down an offer from Iowa State and a phone call from Iowa's new coach. 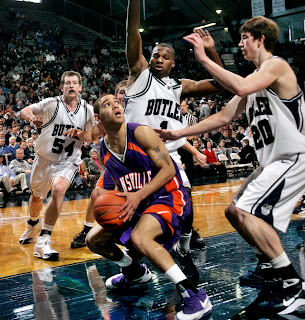 Panther fans- meet 6'3 PG Kaylon Williams. Williams hails from Cedar Rapids, IA and played on scholarship at Evansville of the MVC before returning to Iowa to play at Kirkwood Community College for a season. NCAA transfer rules will allow Williams to begin playing for Milwaukee right away, as his transfer was from a non-D-I school.

Williams averaged 6.3pts, 4.9ast and 4.3rbs at Evansville (pretty darn impressive (and evenly distributed) numbers for an MVC freshman), and later 11.4pts, 4.5rbs, 7.3 ast and 1.8stl at Kirkwood. His versatility will go a long way on this team, and his leadership (every PG has a bit of leader in them) will certainly be welcomed by the great core of younger guys we have coming up through the ranks (Kelm, Richard, and even Boga and J-Mac).

The addition of Kaylon Williams may just strike fear into the hearts of other Horizon League teams hoping to compete with Butler. Everyone in the league knew we have a good team even with the graduating seniors. But they also knew we had no seasoned/effective distributor and play creator now that Ricky Franklin is graduating. We are hoping (but pretty dang confident) that Kaylon is that guy.

Welcome to UWM, Mr. Williams!! All of of us avid (and super-supportive) fans in Panther Hoops Nation can't wait to see you in black and gold this fall. If Jeter and staff continue to recruit like they have been these past 3 years... we could be on to something very big in the very near future. As silly as this next statement must sound- I am dead serious: Watch out Butler. Next season, you may once again have a legitimate league foe on your hands to contend with. We've got a point man and he ain't no joke.