September 12, 2010
Bruce Pearl's recent personal revelation: "It's not enough to tell the truth most of the time". And so we have yet more millionaires just now learning the same lessons they should have as young children. As you have probably heard by now, University of Tennesee head coach Bruce Pearl has been severely penalized by that university in in the midst of a serious on-going NCAA Investigation into recruiting violations committed by the UT men's basketball program. 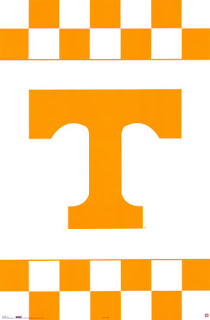 What you may assume is that illegal recruiting and/or less than "all the time" honesty was practiced during Pearl's time in Milwaukee- I am here to tell you both that I don't think that was the case (the pressure for success, the deep-pocketed "booster" aspect and the monetary considerations Pearl experienced in Milwaukee are dwarfed by the fervor and luxury surrounding him in Knoxville) and also that frankly, if that was the case even in the most minor form- it absolutely does does not matter to Rob Jeter's Milwaukee Panthers.

He's got way bigger fish to fry here in the "Lil' ol Horizon". The Pearl era came and passed- 5 years marching on, and some people in Milwaukee still need time (or this?) to get over it. Of the few good things that will come of this, maybe this disappointing news will help the cackling gaggles of UWM alumni who have either abandoned or now ridicule the program since Bruce left, come to appreciate the damn good thing going on in Milwaukee Hoops today. 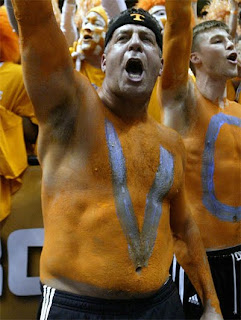 I'm not going into all the former whistle-blower-to-cheat-himself irony stuff as that has been poorly (Pearl was UWM's coach for 3 years, Dana O'Neil? Were you sure about that before you clicked "Publish"?) but extensively covered throughout the college hoops media by now.

That background is interesting in that it does very clearly signify how far D-I NCAA basketball has fallen (or rather failed to advance) in the 20 years that separate the Deon Thomas affair and the embarrassing UT news conference last Friday afternoon. It seems like the NCAA is firing another warning shot. A way of saying "we're watching you". While Pearl is on the hot seat now, it will be another high-profile name in a year or two. I guess the question is how many head guys have to fall before the message gets through and all coaches agree to put an end to systemic recruiting abuses?

Virtually every single coach at a BCS program has at some point committed or is currently committing what the NCAA considers a violation of their recruiting regulations. What makes the UT-Pearl incident so disappointing is not that the NCAA uncovered some evidence in their reviews which pointed to UT basketball recruiting wrongdoings, it's that Pearl lied about it. Clearly he had to have known the NCAA was onto something when he got that original phone call inquiring about his recruiting practices... But the allure of Volunteer Nation treating him like King Midas was in jeopardy.

What Bruce should have realized was that by failing to tell the truth, his punishment began to harshen exponentially. The NCAA knew he did whatever they will reveal when their investigation is complete, they just wanted him to fess up- and Pearl (known to many as College Basketball's Great Communicator) clammed up like a terrified Public Speaking 101 student at the thought of admitting that his Tennessee mansion may have a few glass foundations. Now he will have 1.5 million dollars less to maintain that mansion. 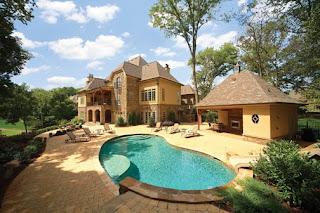 I'm sure he wanted desperately for everything to go away. But things obviously only got worse (for him and Tennessee) and he succeeded only in slightly delaying the inevitable. It sucks that Pearl is in a way a scapegoat for a community's problem- but he clearly he set himself up for the music he faces today. Not every coach is "playing the odds" with the NCAA rulebook.

You can argue whether certain NCAA recruiting rules are too strict or whether others don't go far enough. But you can't lie. You could call it a witch hunt but I see the hammer the NCAA is dropping as a good thing. None of us can lie to our employer and expect to keep our job. None of us can expect to lie about anything and not face the consequences of that lie. Lies spin convoluted webs of deceit and eventually collapse under their own elaborate designs. John Calapari, Kelvin Sampson, Jim Calhoun, to now. Bruce Pearl just happens to be the latest college coach to get caught in his own web. 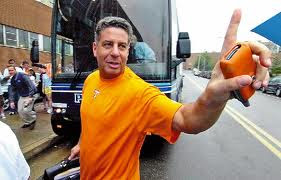 Keep in mind these NCAA recruiting regulations are meant not only to protect College Basketball's integrity-they are also meant to protect the recruits (from things like oh say, getting a Buzz-cut). You can't favor one section of the rule book over another- the rules are the rules. I won't be surprised to see more high-profile programs have their dirty laundry come to light... though I won't hold out much hope of it seriously changing anything. After the harsh example is set, other coaches scurry toward the shadows and avoid illegal recruiting tactics for a time... until it looks as though the coast is clear- and then they return to the same old tricks.

Although his successes as a coach in Milwaukee are record-breaking, this UWM program is a strong program that was hardly built exclusively during Pearl's 4 year High Major coaching dream launchpad tenure in Milwaukee. It started with the great Chancellor J. Martin Klotchse's vision of athletic importance at UWM and was later kicked into high gear by former AD Bud Haidet's dream that a [then] little-known university on Milwaukee's East Side could compete with the big boys. There was a lot of blood, sweat and tears that went into giving Pearl the opportunity of a lifetime that he made the most of.

This is not to say UWM isn't grateful for everything Pearl accomplished here- but it is to say that contrary to what many bandwagon fans of the Milwaukee Panthers would like to have thought prior to this UT admission, Pearl is not the Alpha and Omega of Milwaukee Basketball- no one person is. He is not even remotely the face of the program anymore. Rob Jeter is and has been for going on 6 seasons now.

And it's because of Jeter's rebuilding of the program the right way that is at least partly to "blame" for our 4 years without a post-season. Though difficult to see much progress when reconstruction began, last season's 20-14 finish certainly marked the cementing of the Milwaukee Panther program's foundation. Over these past 5 arduous years Jeter and his staff have quietly (and ethically) recruited and assembled one of the most impressive rosters (highly talented athletes- but also high-caliber-students/high-character people) in this program's history. 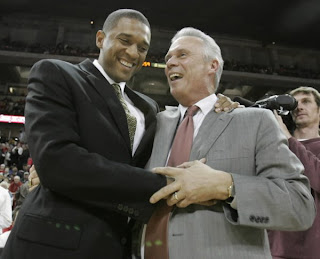 Jeter has a master's degree in Adult Education and he often emphasizes the fact that he is teaching his players about more than just basketball and doesn't see the program as a win at all costs operation. Other programs should be so lucky to have a guy like that at the helm.

In my opinion to avoid ever confusing an honest part of one's job as a basketball coach and an unwitting violation of NCAA rule book- every head coaching staff should read the rules and understand their meaning and consequences. Require a certified test, teach the players the rules, embrace transparency. 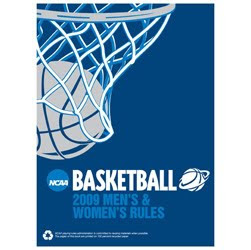 The stakes are too high not to- as Bruce's teary-eyed mea culpa pointedly echoed in real time (a fire alarm actually began blaring just seconds into his announcement, as if there exists a more vivid way of warning college coaches across the nation). Bruce (or at least the Bruce Pearl from 2001-2005) is still my homeboy, but it makes you wonder.... And if your team's current head coach has a hint of less than "all the time" honesty in him - it makes you sweat.