The U.S. Cellular Arena and the On-Campus Arena

November 24, 2010
Last night's somewhat haphazard trial run of bringing Milwaukee Panther Basketball back to campus may have slightly set back or "re-calibrated" plans to build an on-campus arena. And I say "set back" because whether or not the on-campus arena is built is not in question. It is only a matter of time and financing. We will have a campus arena to call our own in due time. But until then... 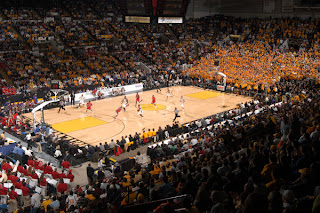 The Cell in March 2005. Milwaukee vs. Detroit. Horizon League Championship.
I understand the idea that bringing hoops back to campus will (automatically?) increase student fan support and bring more of a campus feel to the East Side and to the program. And I'm all for the idea if it's done well. But in the mean time the alternative, other than the rent issue, is hardly a terrible place to call "home". To play in the same Arena that the 1971 NBA Championship Milwaukee Bucks team played in and the Arena that propelled the Marquette Warriors to their 1977 NCAA Championship and made Al McGuire a college hoops legend?

I'll happily watch games at the Cell until a well-planned, well-designed, and well-constructed maintenance-funded-by-revenue on-campus facility is in place (at least 3-5 years out from now). Moving back to the Klotsche temporarily should be off the table. That should go without saying.

The Cell is a nice place to call home for now. Parking is already solved. Many downtown bars and restaurants are just hundreds of feet away. Hotels and attractions nearby for visiting fans. And again- the Cell is oozing with history. If that is difficult to see sometimes, it's because our team isn't yet winning enough to consistently bring in big crowds that bring that nostalgia to life. The amenities may be lacking but so what- does Butler's Hinkle Fieldhouse have world-class amenities? 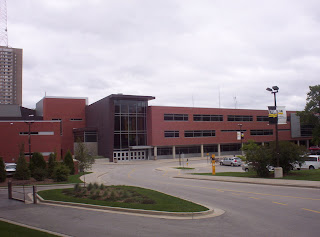 We stay at the Cell until we have a new home. The Klotsche will never work for this program.
And the students? While the last day of classes before Thanksgiving Break wasn't the best night to host an "event" type basketball game, I think most would agree that the fact of the matter is bluntly put- most students really don't care. I don't want to pit students and East Side fans against those who would prefer keeping games downtown, but if student fans are to replace the arguably (esp. after last night) very large contingent of casual Milwaukee-area basketball fans who might not go to many or any games on campus, then they have to prove that the student body can support an on-campus arena. It is hard to see that student support right now.

We have a lot of students, but for the past 3-4 years, a lot of them have been apathetic toward the men's basketball program and athletics in general. I know that feeling of apathy- I was once one of them ('01-'03). We have our hardcore Panther student fans (God bless them), and then we have the other 97%. Simply bringing the game to them is obviously not enough.

The student section fans should be encouraged at every turn- by the team, by the program, by the school, by us fans. And in turn, they should encourage fellow students every chance they get. A combination of their word of mouth and the teams' (hopefully soon) rising winning percentage is unstoppable. You can say students won't show up because of the shuttle buses till you are blue in the face- it just isn't true.

The kind of students who want to go to games will be on those buses and will be at on-campus games in the future. The students who are only interested if the game is on TV or if we are playing a ranked team, won't go to a non-televised game against an average foe even if you drag them kicking and screaming across the block to the Klotsche. With some consistent winning, I don't think that will always be the case, but it is the sentiment for many students these days who were in their early teens last time this program made the NCAA Tournament.

Until we can consistently win and build up a significant (routinely > 500) student fan base, I just don't think anyone in a position of power to make it happen will put the on-campus arena plan on the fast-track. Will the arena be built in 2012 or 2016? Students filling the Cell and making Panther basketball a hot topic on campus puts pressure on the powers-that-be to make it happen sooner.

Winning fixes everything. That's the truth. The Cell will be rocking with Panther fans just as soon as we can string together some convincing victories that let people know we're on a winning path. Bouncing back with a huge win against the Golden Eagles this Saturday would virtually erase last night's setback. Until then, you're kidding yourself if you think a casual college fan will just  blindly support a program that doesn't succeed. Only the Klotsche Krazies would do that! But the rent... 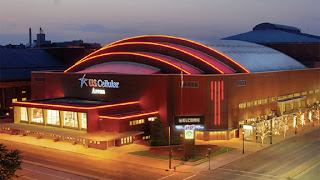 Until we have our own high-quality on-campus arena in place, I am proud to call the Cell home.

The much, much, much larger issue to tackle immediately is the exorbitant and dishonest rent the Wisconsin Center District charges UWM to lease the Cell. It has been stated repeatedly by numerous credible voices that we fleece the WCD's pockets to the tune of around $500,000 per season (depending on how many games we play there). I don't know if this contract was negotiated just after we had our Sweet 16 run and the signers thought like naive realty speculators that things (the economy, fan support, AD budget) would continue to improve forever and we'd never need to revisit the negotiating table, or what, but this is a very bad deal we are a part of right now.

It's inexcusable to be charged Boom Time prices in the middle of the Great Recession (and esp. while our Athletic Department isn't exactly flush with heavy revenue streams). So say they won't allow us to renegotiate a fair deal that makes sense. Fine. Who will replace that $500,000 that I'm sure WCD heavily depends on? Another short-lived doomed-to-failure arena football team? The banks aren't financing any of those these days. My guess is that at the end of the day WCD would like any money in the 6-figure range as opposed to no money at all. That building would otherwise sit useless- and then nobody wins...except We Energies.
Horizon MAC Milwaukee Basketball Rob Jeter UWM Western Michigan