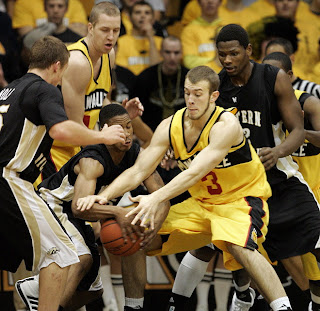 Kyle Kelm is key part of the future, but we need him now as much as then.

On a night that seemed destined for affirming our on-campus support and validating our need for an on-campus arena (not to mention getting us another win before Saturday's UWM-MU showdown), your Milwaukee Panthers could not have reversed their fortunes much more.

I would love to give a more thorough breakdown of the game but I am trying to let this one drift from my memory bank as soon as possible. Let's see.. it went something like this-

Panthers came out sloppy, played the Broncos about even for the first 7 minutes or so, and then WMU began to pull ahead. Missed shot after missed shot dug us into a deeper and deeper hole. We rebounded aggressively and enough to win (40 total and 13 offensive) but our put-backs missed, and our 15 footers missed, and 79.3% of our 3pt attempts (all 23 of them..) missed.

Our free throws, the one thing that may have kept us in this terribly officiated game (the refs seriously let the teams play pickup style in the first half and then began making inconsistently bad and terrible calls int eh second half), would be a thorn in our side yet again (13-23 for 56.5%).

Anthony Hill (15pts, 10rbs) had a double-double and actually played relatively well considering our overall performance. Interesting stat for Ant last night- 4-7 from the field for 15 points. It's a shame he didn't shoot more....

After heading into break down 23-20, Panther fans (while nervous) still felt we'd find a way to win. Not so. Western Michigan came out and dominated the second half. We seemed to play with more energy in the second, but we totally lost control. Nothing was smooth. Passes were forced. Shots were forced.

Defense was out of position. None of our forwards seemed interested in keeping their post guys (namely Flenard Whitfield (19pts, 6rbs) and Juwon Howard Jr. (13pts, 7rbs)) away form the basket. Scoring is only 50% of the game. Defense can overcome a terrible shooting performance. Well, maybe not this terrible, but you get the idea...


We have our feasts and our famines when we rely on the 3 ball. Unfortunately we were starving from the three point line last night. Tone was 3-11 (he was 1-9 until hitting two in a row with auto-foul in place and less than two minutes left). Ja'Rob was 2-7. Tony Meier was 1-6. We just flat out couldn't hit the broad side of a barn as they say...
Even with 10 minutes and plenty of time to erase a 10 point deficit, you could just tell that this one was over even before it began ("The Art of Basketball"?). We got run out of the gym 67-55 by an average MAC team that Loyola just crushed and were embarrassed on our own turf. That's about all I can say on this one. 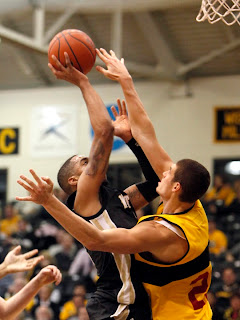 Tony Meier collected 11 rebounds, but connected on just 1 of his 6 3pt attempts.
It left a bad taste. Maybe it's a sign of things to come, maybe it is the final wake-up call. With the conference season fast-approaching there are no more mulligans. With every loss we reduce our chances of winning over former Panther fans on the fence. No time to bitch and moan though. Redemption is only a game away, and what sweet kind of redemption it would be were we to come out and bust some MU heads Saturday night.

I don't entirely blame the players for the lack of effort (or rather lack of accuracy). Their play on the court reflected the environment that was an excuse for a home court advantage. The Klotsche (3,200 capacity) was supposed to guaranteed to sell out. Instead, we had 1,800 announced and maybe 1,200 actually there (and this, after a solid showing of nearly 4,000 against Northern Iowa at the Cell just days earlier).

It was a depressing experience to be a part of. I am pretty sure everyone there would agree with that feeling. The mood of the night could have been marginally boosted had we played a game... but we played like sh**. I hope we never see a shooting display like that again this season. I thought Portland was our low water mark, and I was wrong.

After some reflection it appears pretty clear that there were two big reasons for the lackluster fan support last night. For one, yesterday was the final day of classes before the Thanksgiving break. The campus was literally a mass exodus. I am very surprised this date was picked for a game that was supposed to showcase on-campus support. You can say that most of our students live in the Milwaukee suburbs and easily could have stayed until today....

But many do not have cars, and so do not have a choice. Even so, student turnout could have been bolstered by better planning and advertising for this event. I am a graduate student and in the weeks leading up to this game (and as recently as Monday night) I saw zero posters, fliers, signage on campus letting kids know that we were about to have our first on-campus home game in about 7 years. I just don't get it. A university that cares for it's flagship athletics program does not allow a debacle like last night to happen. 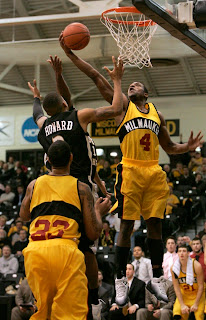 We need to figure this consistency thing out before MU.

Another is that we had several casual Panther or casual college basketball fans who come to our games downtown, but either did not know about the game on campus or do not care to come to a game in a small gym on the East Side. Like it or not, we really can't do without those 1,500-2,000 fans unless students and other new fans take their place.

I'd like to say we can't do without them period, but if we were to (continue to have winning seasons and) build a state of the art on-campus arena where there was parking and surrounding amenities and those people still did not want to come, they obviously aren't too big of Panther fans.

Ok, ok. It's too early to hit the panic button on this season (25+ games left to play). But really? If we play anything like we played last night for even another minute of this season we have no business playing in the postseason. The postseason is for teams that want to become champions. Last night our Panthers looked like they would happily settle for a .500 record and some hard-fought wins over Cleveland State and Wright State in league play.

Not that conference games aren't important, but non-conference games most definitely are as well- even if they aren't against teams from the Big East or the Big 10. It is possible we'll go on to make a stunning turnaround and end up with a solid winning non-con record, but with six games now already in the books, any hopes of dominating the non-con portion of the schedule are quickly dwindling away.

It is quite possible that these Panthers were looking past this game to Saturday. Who can blame them? This didn't seem like a huge challenge. Sure, we had a rough early start in Portland, but after three straight wins over UC Davis, Niagara and Northern Iowa this team seemed poised to make a big run.

Who was WMU but just another MAC squad? We were 8.5 point favorites! But upsets always happen. And they are there to remind the overdogs that every game is a huge challenge. It wasn't mere "luck" that guided Milwaukee to the Sweet 16 in 2005 or George Mason to the Final Four in 2006 or Butler to the 2010 Championship game...

It seemed certain that Retro Night was going to be a fun throwback game and a win. It turned out to be an epic failure on many fronts. You can point fingers any which way you want- from the AD to the coaches to the players- to the fans who were there and acted as if they weren't and the fans who couldn't get their lazy selves off of their couch and walk across the street or drive to the East Side.

But it makes little difference now. We swallowed this bitter pill. Let's hope we learned something from it. We must put yesterday's nightmare behind us and focus on bringing forth our best effort Saturday against Marquette.

Marquette. Every year on this blog, I tend to make a big deal out of how we are "the underdogs", and we "just might upset" them this year and "this is our year" or the "stars have aligned" or the like. And each year they continue to have our number and make this an exhibition contest rather than a intracity showdown. This is probably the best chance we've had since the series resumed to beat MU, but we'll have to play a whole lot better than last night. Three days before this game I have no idea how we will do. This team is a total enigma so far.

When we are on fire, I think we could narrowly defeat the Golden Eagles at the Cell. When we're having spells of frozen cold shooting as we did against Portland and Western Michigan... I think Milwaukee fans could be in for a long, miserable night of watching MU and their fans easily retake their former home- and humiliate this team in the process. 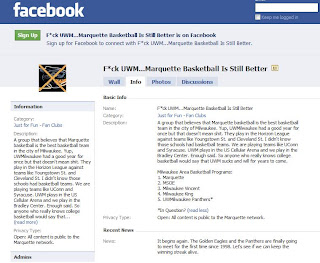 Need a reminder as to why the UWM-MU game is very important to us Panther fans?

I am confident of the former, but mindful that the latter is a very real possibility. Regardless- get off your butt and come support your only local D-I hoops team that bears this great old city's name on their jerseys. We need all the support we can get to turn this thing around. It won't be easy, but it's also far from impossible. We've many miles to run yet.

Marquette is 4-2 and is coming off of two close losses to #1 Duke and #18 Gonzaga. MU has struggled from the outside (.284), which is usually their bread and butter (along with transition baskets). We haven't fared much better from long distance (.303), but a lot of our numbers are skewed by two freakishly bad losses- Portland and this Western Michigan game last night. Our other games spoke much more highly of our shooting abilities.

Let's get 'em Pounce. Does anyone else want to virtually delete last night from the memory of our fans and those who follow the program? BEAT MARQUETTE.