November 29, 2010
It took a breakout shooting performance by Darius Johnson-Odom and a near-perfect 7-8 from the the free throw line down the stretch for the Marquette Golden Eagles to silence the Milwaukee Panthers this past Saturday night at the US Cellular arena in downtown Milwaukee. 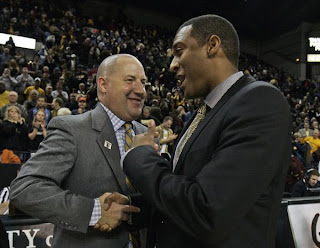 I think Buzz and Rob agree- the series must go on.

Marquette (5-2, 0-0) began to light up the scoreboard from the three point line early, as DJO (29pts on 5-7 from 3pt) had to make this night the game to find his shot (DJO entered Saturday's contest shooting just 5-25 from three).

Milwaukee  (3-4, 0-0) managed to keep the deficit in check with a few runs of their own courtesy of solid post presence by Anthony Hill (18pts, 8rbs, 5ast) and some great shooting and post work by Tony Meier (13pts, 6rbs, 3blk). It is really something special to see how far Ant and Tony have come. Both seem to be coming into their own this season. They are no longer spot performers or role-players, but now the two upperclassmen pillars of the post we rely on to win games. 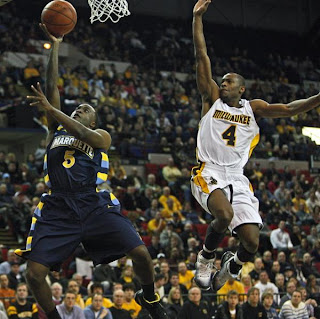 Kaylon Williams emerged as the fearless leader we hoped he would become for this Panther team. Williams logged 37 minutes en route to 12 points, 4 rebounds, 5 assists, and a pair of steals. Kaylon's versatility on both ends of the floor is a huge asset to this team. He is a very well-rounded player and he seems to be heating up as the season trudges along.

Trailing by as many as 18 points in the second half, there were times when it seemed this was going to be just another MU rout. But your Milwaukee Panthers showed some persistent fight and did not back down from this challenge. With just under 2 minutes remaining Tone Boyle hit a key three pointer and Kaylon Williams followed with a quick layin. It certainly seemed like this may have been the game we finally defeat Marquette and break the never-ending losing streak against them in D-I. 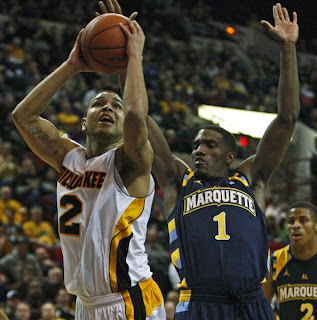 Kaylon going up against DJO


Ja'Rob McCallum (19 points in a big-time night off the bench) drilled a three with under two seconds remaining, but it would be too little too late. You have to give Marquette credit- they made the free throws they had to down the stretch and held onto their lead. Milwaukee brought forth a great effort.

But moral victories don't count for anything in the record books. This was a loss just as Western Michigan was a loss. I think we gained some great experience from this game, and we'll beat a lot of teams playing like we did against MU this year. But a loss is a loss. You can't put any window dressing on it- we now have a losing record again. It's especially tough to know we came so close but could not pull it off on our home court. 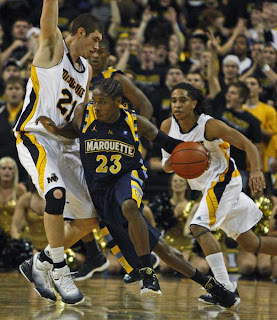 
It has almost become a trend that we seem to "play to the level of our competition". The team on the floor against Marquette this past weekend would never have lost to WMU or FAU. We need to treat every game as important as the next. Only then will we begin to see a bump in our winning percentage and in the support from our fans.

We will have our opportunity against the Eagles again next year at the Bradley Center. But that game is the last game in the current contract. Will it be renewed under fair terms? I don't think fans on either side who were at this game or watching it on TV can justifiably say that this series is not important and has no fan interest from people in the city of Milwaukee.

While the Cell was not sold out as many had hoped when this deal was struck, it was a rollicking house of 7,000+. 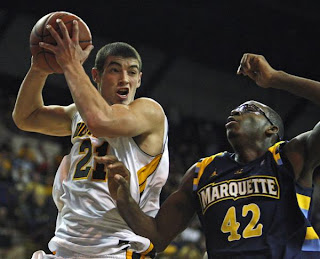 
I am actually glad MU didn't bring all of their fans that would normally go to their non-con games against Centenary and Texas-Pan Am. Their absence made for much more of a Milwaukee-dominated crowd and a better home court advantage. I am more concerned about the Milwaukee fans who failed to show up to our most anticipated home game in several years. Whatever those absent MU and UWM fans' reasons were for deciding to "sit this one out", they missed a hell of a basketball game.

The Marquette fans who did come showed nothing but class- not at all the antagonistic/arrogant bogeymen some UWM fans would portray them to be. With Buzz Williams now established at the helm of MU, it becomes harder and harder to justify any sour grapes about the Marquette program. Tom Crean was no friend of UWM, which is no secret to anyone following the programs during his tenure at MU. But Buzz shows a genuine respect for both Coach Jeter and the Milwaukee program.

Whether it is a 3-1 or a 2-1 deal, that will be up to the two schools to hammer out. But I think the series should continue indefinitely (as should our series with UW).

We begin the Horizon League mini-season slate with a game against Youngstown State Thursday night followed by Cleveland State on Saturday night. Both games are here in Milwaukee down at the Cell, and both games cannot be taken for granted. Both YSU and CSU are off to hot starts, albeit against varying levels of competition. 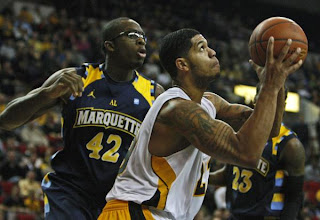 Ant more than held his own against the Marquette front line. 18pts, 8rbs, 5ast.

Come out watch this team get back on the winning track. We failed in our upset attempt of our very talented Big East neighbor. But we played a good game and that may translate into big success in the early Horizon games and the remainder of our non-con schedule. When they play at the level they are capable of, I honestly believe this team can beat anyone. Let's just hope that soon, that level of play (like we saw flashes of Saturday and all game in Niagara) is what we see night in and night out until the end of the season.