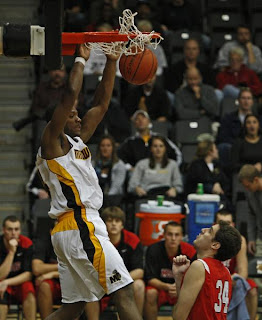 
Both exhibition games went very well for the Panthers. They out-manned MSOE back to the lower east side with a 86-37 unintentional blowout. Seriously, the end of our bench (including Mitch Roelke- former Panther team manager now walk-on player) finished out the final 5-10 minutes.

It was a D-III opponent, and MSOE was clearly out-sized and out-depth'd. I am just glad to see us winning these games where the end result is really never in doubt from beginning to end.

The Panthers then took down Carrol University (also D-III) without much trouble, finishing up these rotation fine-tuning exhibitions with an 84-59 victory that didn't at first seem like a no-doubter... until the second half when our overall talent and depth advantage kicked in.

These Panthers did look slightly sloppy with the ball at times- for short stretches (no games with 10+ minutes sans Panther FG this season.. please!) and only when they seemed to start getting a big lead and in (wrong) turn, get ahead of themselves a little bit.

When matched against opponents who will seize any and nearly all Panther miscues and swing momentum in a minute or two (which MSOE and Carroll clearly did not have the firepower to do), I think this team can keep up the level of intensity throughout the season and throughout the entirety of each game. 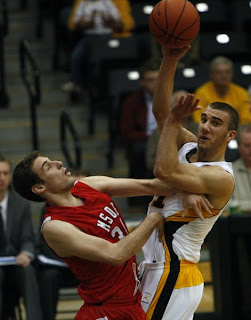 
Both games gave Coach Jeter the opportunity to determine the rotations he think will work best for the team this season. Assuming Mitch Carter is out for a few games with his hand injury, and based on the exhibition floor combinations, the 9-10 man rotation looks to be:

Ajami will probably begin the season as a starter, but I think he'd be a better defensive replacement and next PG in line behind Kaylon Williams. Ajami is not a big scorer- but he is smart with the basketball, relentless on defense, is able to run the offense efficiently.

Haggerty proved himself highly capable of serious minutes time and again last season down some important stretches when it really counted and we needed someone to step up. You can't keep Kyle Kelm off the floor- despite being a Freshman, he is already ready to play at this level. Big Mitch, Christian Wolf, Pat Souter, "Q" (Quinton Gustavson), and Evan Richard (if he has not been red-shirted) also will figure significantly into the rotation.

I don't think anyone will be on the floor much more than 30 minutes a game. But that's many additional minutes of fresh/energized (and quite capable) other bodies to keep the energy and level of focus as close as possible to 100% for all 40 minutes of each game. 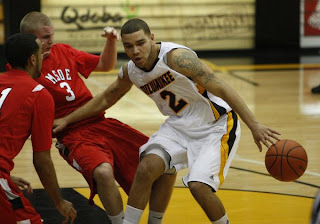 So the season begins... or almost. The Panthers are headed to Portland, OR to kick off this '10-'11 season with the Athletes in Action Classic three game, round-robin style tournament which begins Friday at 3:30. The Panthers face off first against Tourney host Portland in what may figure to be the biggest challenge of the trip. Tune in to WISN 1130 for each one- Bill Johnson does a terrific college basketball game call.

Here is a quick fly-by... a sort of hackish (but somewhat informative) "Behind Enemy Lines" analysis of each opponent the Panthers will play this weekend:


Portland Pilots - Fri, 3:30pm CST
Last Season: 21-10 (10-4 in WCC)
Key Players: Seniors Luke Sikma (bruising PF) and  guard Jared Stohl (.474 3pt % last season..)
Strengths: 3pt Shooting (.407 last year as a team)- this is how they made noise early last season, remember? It is their game.
Weaknesses: They might get out-rebounded by the Panthers.... the offensive "reset" boards and post-play could decide this game.


This season is the culmination of a long rebuilding process that has taxed the loyalty of some Panther fans... but this thing that has become the new, post-Bruce Pearl, Milwaukee Basketball program is a beautiful monster you just can't afford to miss this '10-'11 NCAA Basketball season... and beyond.

Honest to everything- look at the recruiting coming in. Look at the talent we already have developing and tell me this foundation is not pretty solid heavy metal. This is not just the beginning of a new Panther basketball season, but a beginning of something much, much bigger and long-term. Somethin' is brewing in Milwaukee's East Side... I can smell those hops from my front porch.