Milwaukee Goes to Madison and Gets Effectively Badger'd, 61-40

December 09, 2010
15 points. That is all your Milwaukee Panthers could muster against the stingy Wisconsin defense in the first half of a lop-sided 61-41 loss at the Kohl Center on UW-Madison's campus Wednesday night. 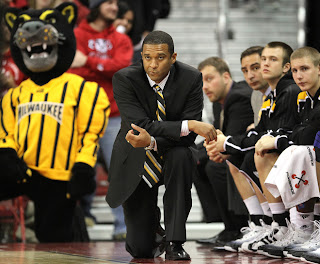 Jeter and the end of the bench express the increasing frustration Panther fans feel right now
We did manage to shoot an impressive 3-7 (42.9%) from 3pt land... but we couldn't get off enough outside shots to make it matter. And, considering our overall field goal percentage continued to be unbelievably low for the second straight game (30.8%), our perimeter shooting would have likely cooled down even if we did get more shots from the great beyond.
This game was frustrating to say the least. My breakdown of this game is meant to reflect the effort we saw from the Panthers in this game. Haphazard, sloppy, unprepared, on-the-fly, careless. I won't ever give up on this team or any Panther team (the 14-17 trial-by-fire and redemptive season of '07-'08 was a thing of beauty despite the losing record).

But it gets very difficult when in at least two games now, we have made so many preventable mistakes that it appears to outsiders as though we never practice and did not fly across the world to play in Europe before the season even started. You see, it's not that we lost to UW (or CSU, or WMU, or FAU or Portland), it's how we lost. It's as if when we get down by 10 or more points- that's it! Game over. Phone in the score to Vegas, we cannot overcome a double-digit deficit...

We have players on this team (Ant, Tony, and Tone) who played in the game against UC Davis in Ames, IA in 2008 in which we overcame a 26 point deficit! Us fans just can't understand how this team seems to wave the white flag at the first sign of trouble. Win or lose, we merely want our team to show a little fight out there for UWM! 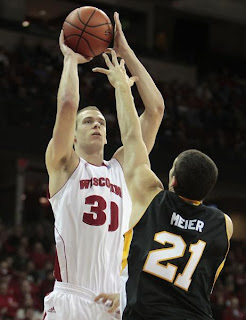 Bo Ryan did play two of his starting 5 (Jordan Taylor and Jon Leuer) for most of the game..., but let's be honest. If Jeter was Tom Crean Bo probably could have (and possibly would have) tried to whip us a new one (ie. 30+ point loss). After keeping within about 10 until the 12 minute mark, and then getting blasted into a 19 point halftime hole, we played UW about even in the second half (UW outscored us just 27-25 in the final 20 minutes).
And we had our bright spots- Ja'Rob McCallum scored 12 points on 6-12 from the field. Tony Meier (who seems to be the only consistently solid Panther player thus far), scored 10 points in limited minutes (foul trouble) and connected on both of his three point attempts. Our defense contained Madison as well as anybody has this season, but it's small consolation what with the continuing cold shooting woes... 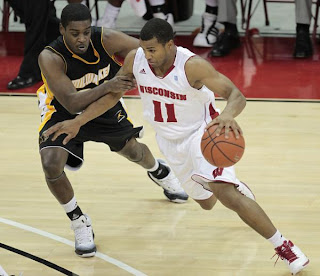 Jordan Taylor drives past Jerard Ajami
Everyone who knows anything about college hoops knows Wisconsin's D is always very disciplined, and very effective at preventing teams from getting good shots. But we have seen this kind of in-your-face man-to-man defense this season- as recently as last Saturday against Cleveland State- and we seem to completely shut down when we face it. If we continue to get flustered by someone actually guarding and not playing a zone, we will be in for a long, long season....
But let us get over the venting. The season isn't a lost cause, but it will be very soon if we don't man up. This point in the season is where we sink or swim. The shooting woes (both from the field and from the free throw line) are surprising seeing as how we have a lot of guys who are known solid shooters.


I believe once we get over that psychological hurdle (it will happen- it's a matter of when), things will fall into place pretty nicely for this group. It's just a shame that we have lost at least 2 games (FAU and WMU) that we very well could have won if our field goal and/or free throw shooting was 10-15% better.
Alas, I don't think anyone (except me after a few beers) had dreams of Milwaukee sweeping the Portland tourney, beating Marquette and Wisconsin and nearly all of our non-con foes, en route to a stellar Horizon League season to put less pressure on our Horizon League Tourney and ensure our first-ever "at-large" bid to the Big Dance. It just ain't gonna happen! 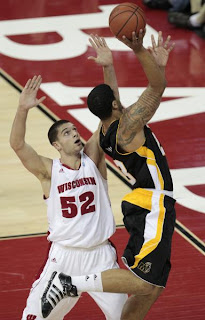 Butler, coming off an NCAA National Championship Game loss, might not even qualify for an at-large this season for crying out loud! All eyes are on the conference tournament in March 2011. The road back to legitimacy (for UWM and all the other Horizon League schools not named Butler University) runs through the location of the Horizon League Championship Game.

That's the only way. After the main slate of non-con games are over (we still have a late-season Bracketbuster match-up against a team to be announced), we must focus, like a laser beam, on the conference season.

So let's get over our ourselves a little bit. We aren't Kentucky fans and we shouldn't pretend to be. We shouldn't expect to win every single game. And enough with all the hand-wringing and self-pity. This program doesn't owe us sh**.

If you donate to the program, that's great and your support is immensely appreciated (I am a sometime very low-level donor myself). And we all hope for great seasons and want this program to get better even faster. But if you feel entitled to some unrealistic level of success year in and year out because of that check- it's not a donation.

I consider myself lucky to have gone to school at UWM during some great runs and witness the kind of transformation this program underwent in a few short years. I still feel equally as privileged to see it's rebuilding get closer to completion. That is laughable to say now, I know... but please wait until conference commences before you begin singing the "omg, season is already over" swan song.

We've been down this road many times before and the team has proven us wrong more than once. 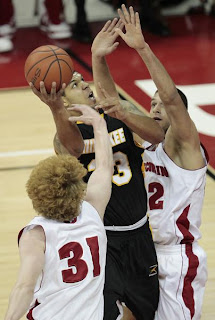 Mike Bruesewitz with another uncalled foul on Anthony Hill.
Ant gave and then got the business from the refs Wednesday night.

Are we disappointed in the season so far? Heck yeah- what do you think the team and coaches are yucking it up and "content" with 4-6 and 3 blowout losses? I sure hope they are all weathering this storm and coming together to find a leader or leaders to bring the season back on track.

All of the fan bitching and moaning, and any of the team's bitching and moaning, while providing some anger management in the immediate aftermath of a devastating loss, does absolutely nothing but turn fans against fans and turn teammates against each other. We can't have any of that- there are at least 20 regular season games to play yet- including 16 of the 18 Horizon League games. 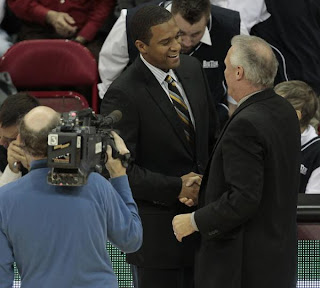 Bo happily dispatched us again, but there were no hard feelings. Next year?

We face off against a 7-1 South Dakota State squad of the Summit League Saturday night. The Jackrabbits knocked off Iowa earlier in the season, and cannot be taken lightly. After the three (let's please keep it at that number and move on) embarrassing performances we've put in thus far in the '10-'11 season, no game can be overlooked. We need as many 100% effort games as possible to erase those memories.

We can fume and we can mock or we can help do something about it. We'll have to wait until Bowling Green comes to town to show our support in person at the Cell (although you can also show support at the DePaul game just 2 hours away in Chicago). The South Dakota State and Bowling Green games will be broadcast by WISN 1130 with the incomparable Bill Johnson calling the games as usual.

Yeah, we hit a rough patch in the first 1/3 of the season. And yeah, the team has looked more than a little lackluster in some of the losses. But despite the scores, 6 losses are still just 6 losses (after tonight, Butler is 4-4). Losses happen- in basketball, in our jobs, in life.

In all sports, the will to continue fighting despite a less than fortunate situation separates the short-term flame-outs from the long-term Champions. In life it can determine much more serious and important consequences.

The late Jimmy Valvano's V Foundation motto "Don't give up. Don't ever give up" may be cliche these days. But it's cliche for a reason. Those are some of the last words ever publicly spoken by the truest, most gold-hearted college hoops fan and coach that ever lived. 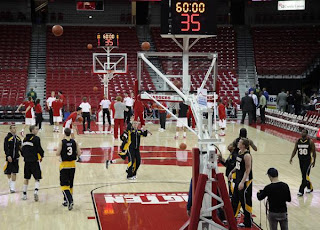