December 03, 2010
Anthony Hill put on a show last night at the Cell. Hill posted his second double-double of the season as he amassed an incredible- 30 points (career high), 12 rebounds (6 offensive) and 2 key blocks to lead Milwaukee (4-4, 1-0) over Youngstown State (4-2, 0-1).
To put this stat line in perspective, by overall comparison, only 11 other D-I players have had games of at least 30 points and 10 rebounds this season. Ant's moves in the post were absolutely fluid and reminiscent of some of his best games last season. 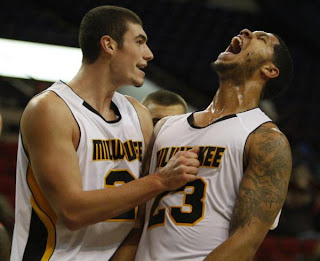 Ant and Tony rejoicing one of the many UWM successes last night.
The Panthers seemed to toy with their Penguin prey for much of the night. After going up by 10 twice early in the game, we allowed YSU to come storming back by way of 3's by Madison-native Devonte Maymon (16pts) and their most impressive player and senior leader, Vytas Sulskis (18pts, 6rbs). The Panthers kept a small cushion of a lead for most of the game, but it was way too close for comfort.
Tony Meier (4pts, 8rbs, 6ast) was everywhere and contributed heavily to this W. Tone Boyle (9pts, 5rbs) had a solid game. Tone would have likely scored a lot more if our offense wasn't on cruise control in the post with Ant's breakout performance! We shot just 10 three pointers(!)- and Tone shot just 2 (making 1, we made 4 as a team). 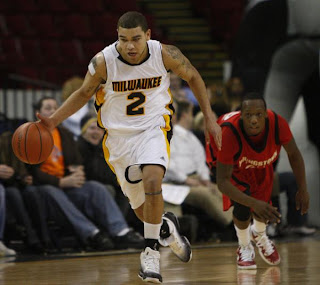 #2, Kaylon Williams, pushing a turnover gift up the court.
After some tense moments in the final minutes, Milwaukee prevailed 76-67 thanks to some very clutch free throws (4) by Kaylon Williams (14pts, 8rbs, 4ast, 2stl). I said it after last game and I feel obligated to say it again (because Kaylon has been good, but quietly good up until now)- Kaylon is emerging as our true floor general and the rare true PG this program has been lacking since Chris Hill graduated.

Even better things are to come once he fully acclimates himself to our style and figures out exactly what makes opponents (esp. Horizon opponents) tick and how to manage our possessions in every possible kind of game situation.

And it's worth emphasizing- Anthony Hill is a beast. Period, point, blank. Most Panther fans already knew that as we saw Ant (along with Ricky Franklin and James Earyrs) emerge as one of the three cogs that got last year's 20-14 Panther Machine in full motion. They won 7 of their final 9 contests and came within minutes of reaching the Horizon League Championship game. Let's hope that Ant's much earlier ascension to the Horizon League Elite stage this season will translate into a few more wins or at least a deeper run in the post-season. 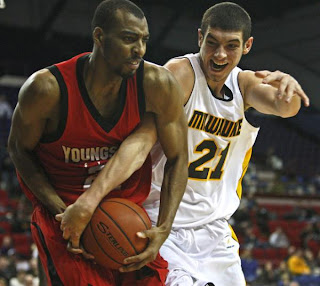 Doing his best Pounce impersonation, Meier goes for the ball against an unsuspecting Penguin
Our free throws continue to be a major issue with this team. Had we shot just a little better from the line (18-32 for 56%), this one would have been in hand and stayed in hand well before the closing minutes. I'm sure these guys practice FT's every day and it's just a little different in a game. I'm confident our FT % will go up and they will get a lot better as the season moves on. We can only get better in that department..
So we beat YSU, but struggled at times.. However, most observers would agree that this isn't your father's Youngstown State. Jerry Slocum is changing the way they do things over there. It may not be long before Youngstown is no longer the whipping boy of the Horizon League. And when our only conference team who seems to be perennially terrible is on it's way up, that is a very good thing for the league and it's overall competitiveness relative to the MVC, C-USA, CAA, etc.

Next up on Milwaukee's plate is the undefeated Cleveland State Vikings (9-0, 1-0). CSU came to the state yesterday and started their 2-game trip out right, defeating Green Bay. Gary Waters hadn't won in Wisconsin in his tenure at CSU... until last night. You know he's gunning for us now to erase both of those losing streaks (@UWGB and @UWM). We are going to have to bring it against Waters and the Vikings. 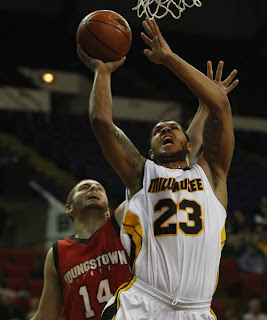 Tonight was yet another reminder of just how good our #1 power forward is...
Versatile Viking guard Norris Cole (avg. 22 pts./game) is arguably the best player in the Horizon League thus far in this young season. We've gotta have an answer for him, as well as guards Jeremy Montgomery and Trevon Harmon.

Kind of shockingly, each member of their starting backcourt is currently averaging double digits in scoring. It will be incumbent on Tone, Kaylon, Lonnie, Ja'Rob, Ajami and whoever else is guarding those guys to lock them down and not let them get open looks. They don't seem to have a huge post presence so perhaps we can exploit that with Ant, Tony, Kyle, and Ryan. We can't make a lot of mistakes against this CSU team.

And we definitely can't be plagued by bad shooting- free throws or otherwise. As I keep on saying... these Panthers have the talent to match up against virtually anyone in D-I. It's all in the execution though... If we execute, this and many other upcoming games will become victories.

If people in Milwaukee are looking for something economical and fun to do Saturday night- they'd do themselves a solid by taking in this huge contest which kicks off at 7pm in Milwaukee's U.S. Cellular Arena. The Milwaukee Panthers provide the best sports value in the history of D-I sports (but I still waste all my money at Major Goolsby's before and after games to negate the savings!).

Here's to holding out hope for a much-needed winning streak. We need to pile up wins like Ant piled up points and rebounds last night- aggressively, continuously and with a vengeance.