A Clunker and a Stunner

January 26, 2011
Your Milwaukee Panthers began their Indiana roadie with a complete meltdown against Valparaiso. But then followed up that rough night with a stunning 86-80 OT victory against the once-unbeatable Butler Bulldogs. 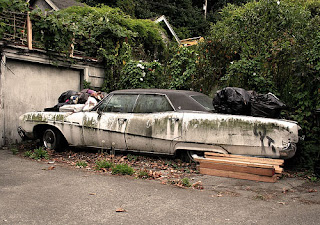 Panther fans wish we'd have had a few less (or none) of these.....
I wish I had the time and game viewing experience to provide a decent summary of these way up and way down two games... but I don't. Tom Enlund at the Journal-Sentinel has you covered here and here if you haven't read the recaps already.

I was en route to a wedding up north and missed the Valpo game. I actually found out how bad it was via text message from a good friend. The text simply read, "We Suck"- my friend is a long-time and very knowledgeable Panther fan not given to criticizing when criticism is undue and so I knew what that meant. But I had to find out how it happened.

We were run out of town in Valparaiso, losing to the co-League Leading Crusaders, 60-43. I'll punt to another Tom E. game recap quote to sum it up: "The Panthers made 2 of 21 three-point shots (9.5%) for the game and were outscored in the paint, 40-14.". I think that's all any of us need to know. Suffice it to say we must move on and rid our minds of that face-plant. 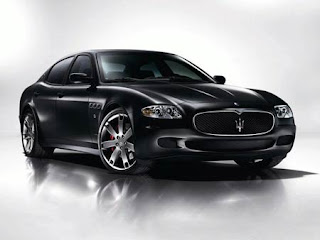 And a few more of these... this season. Lol.
And unless you live on Mars you know what game myself and 99.999999% of other Wisconsinites were tuned into on Sunday afternoon.

I did catch the opening minutes of UWM @ BU and felt very optimistic when I changed channels to appease my Bears fan friend for the Packers-Bears "pregame" and we were tied up with the Dawgs at 11-11. "Go Panthers!", I said to myself, but with more on the line for the never-say-die Packers that particular day- my voice was stuck on that 3-word chant us Packer fans hold dear: GO PACK GO!

But anyhoo- it's a huge "+" to sweep BU but, with our mind-boggling jack-in-the-box of performances this season, no one in Milwaukee knows what to expect. With our anything-but-even-keel '10-'11 performance to date, anything really can happen.

I would venture to guess we have confounded and infuriated the Las Vegas odds-makers and bookies on many occasions this season (we are +10 we lose, we are -10 we come out of nowhere for the win- it's crazy I tell ya!).

So far, there is just no way to even remotely predict this team's performance from game to game.

This season has both thrilled and completely depressed the Milwaukee fan base. It has gotten to the point where people like me are muting any optimism after the damn good ones like this past Sunday and the Negative Nancy's are biting their tongue after the ones we phone in.

Both sides of the coin know that our competing Panther personas ("Effortless" vs. "Effort-Lacking") have essentially given rise to a literal wash (UWM is 10-11, 5-5) that is reflected in our overall and conference records.

The team can compete however. And dare I say... (it would be somewhat akin to the Pack winning the Super Bowl being a 6th seed in the NFC (in that it has never happened.... I confess that the comparison mostly stops there))- this team can win the Horizon League Tournament Championship.

Don't believe me? Look at who we have beat- and read the box scores of every single one of our wins (when we win- we do not **** around). The problem is- to win the league tourney (if we don't get the #1/#2 seed Double-Bye which is not impossible, but definitely unlikely) you have to play well for more than just one game.. (you have to win four in a row). 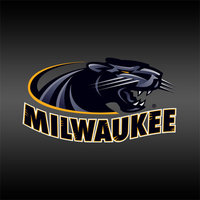 MILWAUKEE PANTHER BASKETBALL. It's good for your health.
We can beat anyone- but I don't think anyone is convinced we can beat anyone on any night- night in and night out. Our longest winning streak so far is just three games (UC Davis, Niagara and Northern Iowa).

It's one thing to sneak a nice victory in the midst of a horrible season- terrible teams get overlooked by superior opponents all the time and pull off the upset. But a regular season sweep of Butler? The first bonafide "game" against Marquette since the modern era of D-I basketball?

Add in a few more dominating performances to boot? This is not a terrible or hopeless team we have here- it is just an agonizingly inconsistent one.

It's like the weather on steroids. Imagine if the bitterly cold temperature we have today (23° F currently in Milwaukee) suddenly rose to 95° overnight! That is what we have seen in this team. It is unexplainable, it's almost predictable, but one thing is consistently true- this yo-yo effect must stop. If it doesn't, we may see ourselves losing in the 1st Rd. of the Horizon League Tourney- at home.

Sorta good and so-so teams are often inconsistent- it's a big reason why they can't be counted on to compete for the crown. Great teams assert themselves and "impose their will" as Jimmy Lemke's PantherU.com recent posting succinctly describes.

They have a swagger about them and expect to win. I don't think we are quite there yet. This three game home-stand could change a lot of people's minds.. but the consistency just has not been there game in and game out. 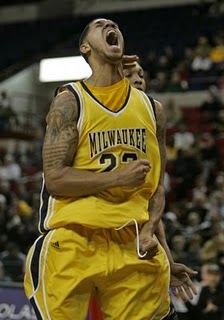 Ant will be a key soldier in our battle with the Detroit front line Friday night..
This season, the Horizon is obviously a League with absolute parity- and the Panthers still do have an outside shot at 5-5 (2.5 behind 7-2 CSU and VU) with three straight league home games on the docket. But there are other very talented teams (Valpo, Butler, CSU, WSU) who have not had the nightmare games like we had against against Portland and Western Michigan and CSU and WSU and at Valpo.

There is a reason why a lot of fans have either turned their backs and/or closed their wallets when it comes to supporting this team. I don't agree with folding at this stage of the game (season), but I understand.

College Basketball games are not played in a vacuum and there are key reasons behind the proven and time-tested phenomenon of "home court advantage" across all sports (fan-induced referee bias is the most identifiable and significant reason according to a recent Sports Illustrated article- but I tend to think there are other reasons too immeasurable/intangible to quantify).

Where would any team in any sport be without fans? If you care, you'd put on your game face this Friday and this Sunday and do just as we ask the players to do- give it your all. Cheer the team on, rattle DMU and WSU and bark at the refs! We only get this chance to effect the outcome when our Panthers are here in Milwaukee. 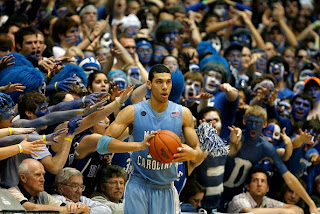 Think fans have no effect on the game? Just ask this guy.
We have just 4 regular season home games left. If you are at one or more of them and see the Panthers performing at the level you hoped they'd have been at all season but feel you must stay silent to save face lest you look like you are backtracking against your critical assessment of this team to friends or family or members of a certain (very bi-polar) online discussion community.... forget about that and don't worry about this team letting you down.

Life is a series of let-downs to a varying degree; we should all know that by now. But it's also a roller-coaster that provides some pretty awesome peaks along the way. That's what I'm banking on. That's why I waste so much time writing this blog.

I am confident most Panther fans will welcome any signs of green shoots and actively help hoot and holler us on to victory at the Cell these next three games, but sadly I am convinced there are more once-rabid Panther fans than we'd like to admit that have all but given up on this team and this season- with 9 games left!

Whoever those Panthers are- un-bite your tongue, and pleeeeeeze- just belt out a GO PANTHERS for the guys putting it all on the floor for us.

Yes, we have sucked big-time in several games this season. But those clunkers are in the rear-view. It's Demolition-Derby time in the Horizon League and Detroit and Wright State are ripe for the kicking.

No one thought we'd be 10-11 at this point, but then again no one thought Butler would already be on the verge of needing an auto-bid to have any chance of even making it back to the party they crashed just one year ago.

That was then and this is now. At the very least give these Panthers some applause when they deserve it.

Even if any boost we give to the team or psychological shift we cause in a referee's head is relatively small and virtually immeasurable, it's the least we can do as fans.